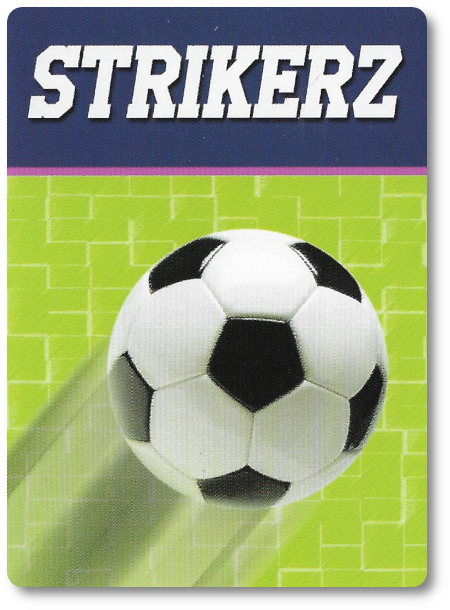 Uruguayan journalist, writer, and “global soccer’s pre-eminent man of letters,” Eduardo Galeano said, “In soccer, ability is much more important than shape, and in many cases, skill is in the art of turning limitations into virtues.” In this game, you need not be a star athlete, but you do need to be on the lookout for opportunities to score at every turn. Victory won’t go to the strongest or the fastest here. Victory goes to the shrewdest card player.

Strikerz, designed by Randall Thompson and published by StrikerZ GameZ, is comprised of 54 cards. The cards are as thick and as durable as your standard playing card. Illustrations are colorful and exceptionally minimal, meaning to represent specific elements of the soccer game.

To set up the game, first have each player decide their team color. For our copy, the team colors were red or blue.

Second, look through the cards and remove the Jersey card numbers “12”, “14”, and “15”. Give these three colors to their owning player (per team color) and have them place the cards face-up and off to one side. These are the player’s “substitutes”.

Third, give 2 Ball cards and a matching set of Keeper cards (left and right hand matching their team color) to each player. Players should keep these cards as their hand and hidden from their opponent until a card is played. It should also be noted that the player never discards these four cards during gameplay.

Fourth, shuffle the remaining cards and deal four to each player. These are added to the player’s hand.

Fifth, place the remaining cards in the deck face-down in the middle of the playing area. This is the draw deck for the duration of the game. Leave room for a discard pile.

That’s it for the game set up. Determine who will go first and begin. The first player will draw the top-most card in the draw deck and then discard it to create the discard pile.

Strikerz is played in turns with no set number of turns per game. A player’s turn is summarized here.

The first thing a player does on their turn is to decide if they will draw a card from the draw deck (a blind draw) or take the top-most card from the discard pile. The drawn card goes into the player’s hand.

The player now plays a card from their hand. There are three types of cards to play:

Action cards are played directly to the discard pile. Once played, they are immediately resolved. Action cards include the following:

Once the player has one of the three sets in place, they announce they are attempting to make a goal. The player discards any card from their hand, which will not take effect. The player who is kicking the goal selects a Ball card (right or left) and places it face down. The opponent selects one Keeper card (right of left) and places it face-down, as well. Then both cards are revealed. If the Keeper card matches the Ball card direction (player shoots right and the opponent’s keeper moves left, for example), the kick is blocked. 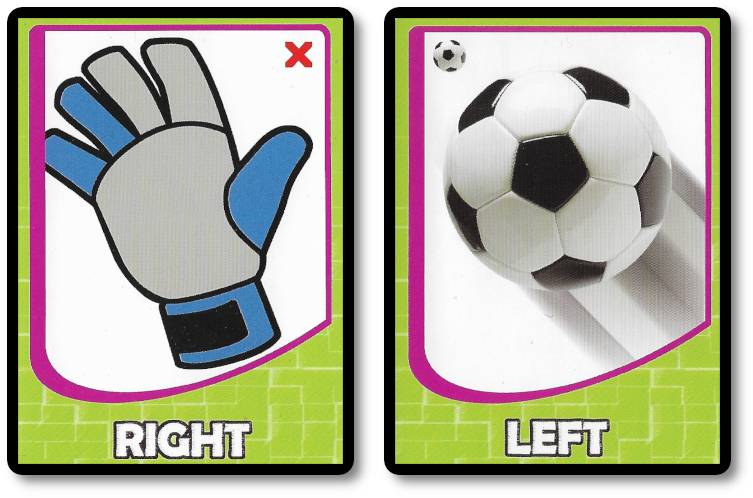 If not, the player collects one “Goal!” card. Regardless of the outcome, the player’s Jersey cards are collected and put to the bottom of the discard pile. 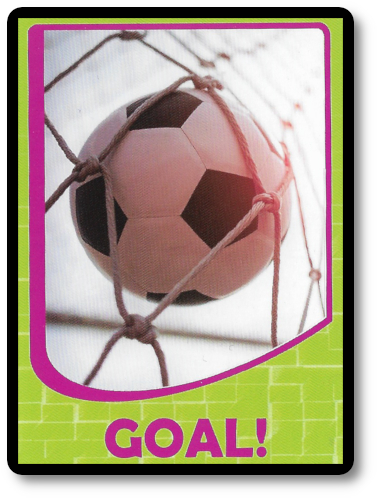 An opponent also can stop the kick by playing a number of Jersey cards that equal to or are higher than the player’s Jersey cards.

Jersey cards that are the player’s opponent’s color can be kept in the player’s hand but cannot be played to any other place but the discard pile.

End of the First Half, End of the Game, Overtime, and Penalty Kicks

The first half of the game is considered completed when the draw deck is depleted. The current player completes their turn as normal. The second half then starts by shuffling the discard pile to create a new draw deck, dealing four cards to each player.

In the game’s rare circumstances wherein there is still a tie after overtime, the players take a combined five penalty kicks, using the Ball and Keeper cards.

To learn more about Strikerz, visit the game’s webpage.

The Child Geeks enjoyed themselves, finding the game to be a fast-paced set collection approach to the real-world attempt to move the soccer ball down the field as a team. According to one Child Geek, “I know how to play soccer, and I like the game. This card game reminded me about what our coach always told us about working as a team. I would play this again.” Another Child Geek, who was not overly familiar with soccer but was rather well-versed in card games, said, “This was an easy game to learn, and I liked playing it. It is easy to get the ball down the field to kick, and seeing if you score or not feels exciting.” When all the votes were in, the Child Geeks gave Strikerz their approval.

The Parent Geeks found the game entertaining enough with their kids but it fell flat when they played it with another adult. According to one Parent Geek, “I liked the game with my kids and was only vaguely aware that the game was about a sport. I don’t know much about the game on the field, but I enjoyed it enough at the family table. Not a game I want to play with another adult, but I had a great time with my son.” Another Parent Geek said, “Good enough for the family, but not a game that interested me. I would play it if my kids asked.” When all the votes were collected and counted, the Parent Geeks found no reason not to approve but were not overly excited about the game, either.

The Gamer Geeks found Strikerz to be boring. According to one Gamer Geek, “Not much here, and the idea that this is a sports game is laughable. Sure, it has team colors, and the narrative is that you are playing as a soccer team, but not once did I ever feel like I was playing a sport. This is a card game, and it isn’t that great. No thanks.” Another Gamer Geek said, “Not terrible, but not great. Felt a bit flimsy on the rules, and some of the card plays feel like they were added to help the game feel more like a sports game. I think it is a great attempt, though, and don’t want to suggest to anyone the game isn’t worth playing at least once.” When the last ball was kicked, the Gamer Geeks didn’t feel Strikerz met its goal.

Strikerz is a fast-paced card game that left me feeling like it wanted to be exciting and engaging but never reached that point. Which cards you play and when is pretty obvious most of the time, and there is no reason to hold back. I do like that you can take your opponent’s Jersey cards in your hand to stop them from having an easier time. It feels a bit like a cheat at first, but it’s a viable option.

I fall in the Parent Geek camp regarding my feelings towards the game. Strikerz isn’t a title I would want to bring to the table if I played with another adult. The entertainment value increased only when I played the game with the Child Geeks. The energy and enthusiasm the Child Geeks brought to the table when shooting goals and playing Jersey cards were noticeably higher than when playing with adults or jaded gaming elitists. Furthermore, the game is short, which is great for the younger and casual crowd. You can get playing in less than two minutes and finish a game in less than 20 minutes. Just long enough to feel like a full game and short enough to ensure you never get bored. Good stuff for a parent who wants to engage with their children in an activity at the table during these busy times.

For me, Strikerz is a filler game for those who like sports. There are some great sport-themed board games available today (we have reviewed a number of them), and all bring something unique to the table. Strikerz does the same by providing soccer enthusiasts an opportunity to enjoy the game using a different medium. If you like sport-themed games and have a particularly soft spot in your heart for soccer, do give the card game a try.