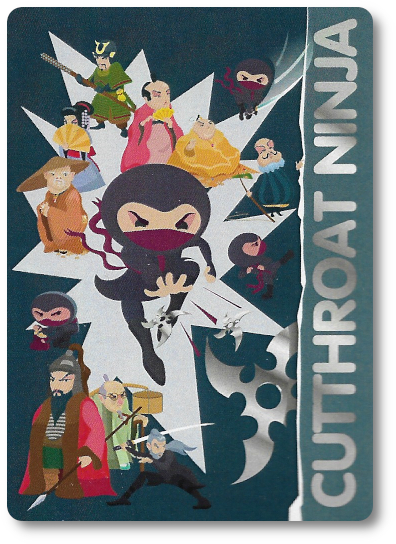 Japanese martial artist, actor, filmmaker and writer, Sho Kosugi said: “Only a Ninja can stop a Ninja.” And as badass as that sounds, it’s also probably true. Ninja’s approach their target from the shadows and strategize their attack before even drawing their weapon. The only good thing about having a Ninja hunt you is that you won’t have to worry about it very long because you’ll very soon be dead. Which, you know, is convenient and strangely thoughtful. In this game, you and your other Ninjas are all attacking the same target, but only one of you will earn the honor of landing the fatal blow!

Cutthroat Ninja, designed by Ben McGill and published by In the Den Games via the Game Crafter, is comprised of 108 cards. The cards are as thick and as durable as your standard playing card. Illustrations by Marina Tsareva are immaculate, colorful, and stylized to match the game’s theme and narrative.

To set up the game, first separate the Target cards and set them aside.

Second, shuffle the Target cards and place them face-down in the middle of the playing area. This is the Target draw deck for the duration of the game.

Third, shuffle the remaining cards and place them face-down in the middle of the playing area. This is the draw deck for the game’s duration (not to be confused with the Target draw deck). Leave room for a discard pile.

That’s it for a game setup. Determine who will be the first round’s dealer and begin.

Cutthroat Ninja is played in rounds and turns for a set number of 10 rounds per game. At the start of a round, a new Target card is drawn and revealed to all the players. The Target card represents an individual who needs to be assassinated by the player’s Ninja clan. These include thieves, corrupted officials, and even an evil Grand Master! Each of the Target cards includes the name of the target, a summary of why they need to be taken out, the number of hit points they have (i.e., “life”), and the amount the target is worth end of the game. 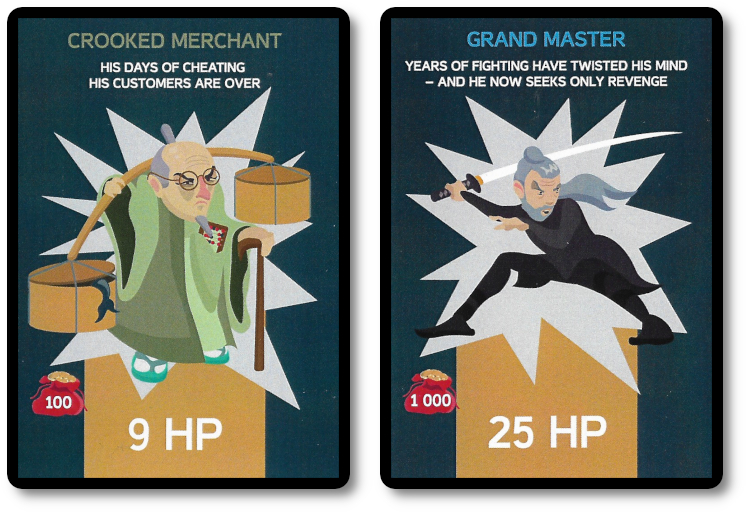 Once the new Target is revealed, the dealer gives five cards from the draw deck to each player. These go into the player’s hand and remain there until the cards are played.

Players take turns during the round, attempting to be the Ninja to land the fatal and final blow, thus taking out the target. The player to the dealer’s left goes first in the round. A player’s turn is summarized here.

The first thing every player does is draw a card from the draw deck. Contained in the draw deck are two types of cards. These are Attack and Strategy cards. 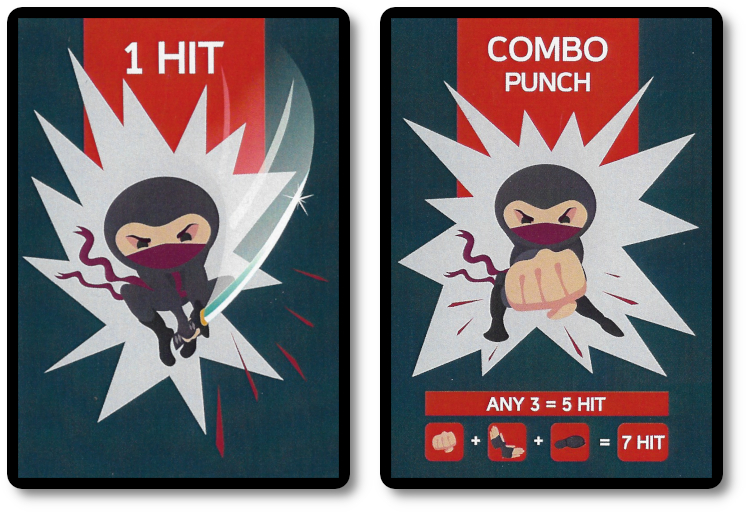 Strategy cards give the player a special action that is immediately resolved once the card is played. Actions include removing opponent Attack cards, switching attacks with an opponent, stealing previously eliminated Target cards, forcing an opponent to help you, increasing the difficulty of taking down the target, and several other actions that give the player the “cutting edge” during their turn or round. 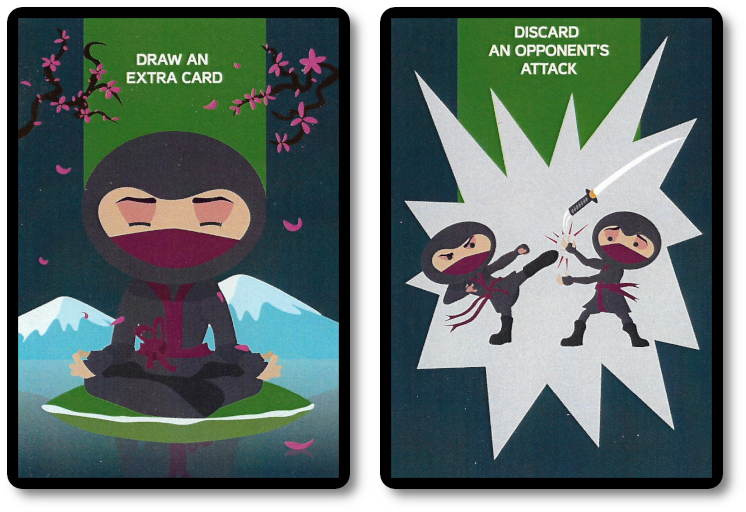 The player now has three options.

They can play a Strategy card. The Strategy card is resolved immediately and then placed in the draw deck’s discard pile.

They can decide not to play an Attack or Strategy card and pass. This automatically ends the player’s turn. There is no hand size limit, meaning this is a good approach for players who want to build up a combo.

After completing step two, the player’s turn is over, and the next player in the turn order sequence takes their turn, starting with step one noted above.

Back Into the Shadows

The round continues as noted above, with each player taking their turn drawing and playing (possibly) a card or two. Each player is responsible for keeping track of the total amount of damage their Attack row has dealt so far. The first player to deal a total amount of damage equal to or greater than the Target card’s listed hit points has landed the fatal blow. This player collects the Target card, placing it face-up next to them.

This ends the round.

After the Target card has been eliminated and collected, a new round now begins. Collect all the cards played by the players and any left in the players’ hand. Discard and then deal each player a hand of five cards from the draw deck. Finally, reveal the next Target card.

Gameplay resumes as noted above. When the last Target card is eliminated and collected, the game comes to an end. All players now count the gold reward amount listed on their captured Target cards. The player with the most gold wins the game. Note that players can share a Target card among two players. If this occurs, both players share the gold reward by dividing the total by half.

If a shorter game is needed or just a different way of determining the winner, three game variants are available. They are summarized here:

To learn more about Cutthroat Ninja, visit the game’s website.

The Child Geeks enjoyed the game a great deal. Some of them even went so far as to make Kung Fu sounds and punch the air. One Child Geek even got out of her chair and did a few kicks at a pillow. According to one Child Geek, “I like the game a lot. You have to do math in your head, but it feels like a race.” Another Child Geek said, “The best part of the game is taking out the bad guys using combinations of fists and punches. I feel bad for the bad guys. They get hit a lot.” When all the votes were in, the Child Geeks gave Cutthroat Ninja two very enthusiastic thumbs way, way, way up. Note that for our Child Geeks, we used the game variant that set the number of rounds to three. This worked out great, and the game, regardless of the number of rounds, always kept the Child Geeks engaged and enthusiastic.

The Parent Geeks also enjoyed themselves, remarking that the game felt like one part race and one part gratuitous, over the top, attack scenes from movies. According to one Parent Geek, “I like the game since it requires my kids to do math in their head and think about what cards they want to play and when. I like the game because the game, while simple, does make you stop and think about when you want to attack, strategize, or hold back to send a flurry of punches in a combo. I really enjoyed it.” Another Parent Geek said, “Good stuff. Easy game to pick up and play. It can run a bit long, especially towards the end, but I always felt like it was worth playing through. I’d play it again.” When all the votes were in, the Parent Geeks gave Cutthroat Ninja a deep and respectful bow of gratitude.

The Gamer Geeks didn’t think the game was bad but were not overly enthralled with it either. According to one Gamer Geek, “The game is good enough and pretty light. Good for a filler, I suppose, or just a fun game to put down at the table at a convention when we can get back to those. The Strategy cards are fine, too. The entire game didn’t leave me feeling poorly or judgemental, but nor can I say it excited me. I guess I’ll give it a pass, though, because it did make me think.” Another Gamer Geek said, “Light and fast, fun and strategic, but to a point. The game can run a bit long. I suggest players play to a reward size limit. This always leaves a few Target cards behind, but that is just fine and makes the game more approachable to replay in the future.” When all the votes were in, the Gamer Geeks approved Cutthroat Ninja, not finding the game too overly exciting but enjoyable nonetheless.

Cutthroat Ninja is a pretty tight game. Simple math and fun combos make it fast to play and easy to get excited. The Strategy cards can hurt your opponent, but never to a point where one single player is ever overpowered. Think of them as throwing a speed bump in front of a player. Depending on how much total damage they have dealt so far, the strategy card’s timing will either feel like a nuisance or will be instrumental to having them fail to capture the Target in time. This makes the Strategy cards truly strategic in nature if played properly.

My only negative comment regarding this game is its length. With six Ninjas, the game really can last up to 90 minutes. That is waaaaaaaaaaaay too long, folks, for a simple card game like this. Luckily, the game variants available help reduce the game’s total playing time without reducing any fun. Just note that the game never becomes more complex. This means, the longer you are at the table, the more repetitive – and as a consequence – and boring the game will start to feel. Don’t let this happen. Do use the game variants.

Overall I was very pleased with the game. Easy to pick up and teach, as well as share with others. Feels super good to land a solid combo and even better when you can slow another player down just long enough to take the lead. Several of our players suggested the game was similar to a race, and I agree. You want to play your Attack cards as fast as you can, but not so fast that you miss an opportunity to land some hardcore combo combat killing. You really have to think through your cards and not get overly excited about playing cards each turn. Sometimes it’s an excellent move to pause a moment and collect cards.

Very pleased with Cutthroat Ninja, and I think you will be, too. Do give this game a try when you get a chance to see if this “silent but deadly” card game makes some joyous noise at your family gaming table.