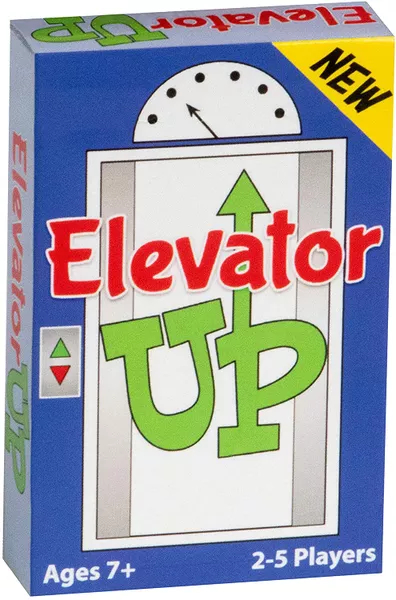 English poet noted for his war poetry during the Second World War and his wry memoir of the Western Desert campaign, Keith Douglas, said “Life is like an elevator. Up and down, make sure you get off on the right floor.” In this game, players will be riding up and down the elevator with the single intent of controlling the console that determines which floor to visit. Keep your options open, or you will find yourself traveling to a destination that won’t lead to victory.

ElevatorUp, designed, illustrated, and self-published by Harrison Brooks, is comprised of 50 cards. The cards are as thick and as durable as your standard playing card. Illustrations are colorful, and the text is large enough for even these old eyes to read easily.

To set up the game, first shuffle the deck.

Second, deal three cards to each player, face-down. Players should NOT look at these cards!

Third, deal two cards to each player, face-up. These stay in front of their owning player. Look all you like at your own cards and your opponent’s.

Fourth, deal an additional three cards to each player. These are kept as the player’s hand and should be taken up as so, removing them from the table to ensure they don’t get confused with the initial three cards dealt to them.

Fifth, put the remaining deck of cards in the middle of the playing area, face-down. This is the draw deck for the duration of the game. Leave room for a discard pile.

Sixth, each player may now swap none, one, or both face-up cards in front of them with any single card in their hand.

Up and Down We Go

ElevatorUp is played in turns with no set number of turns per game. A player’s turn is summarized here.

Step One: Play a Card or Pick Up Discard Pile 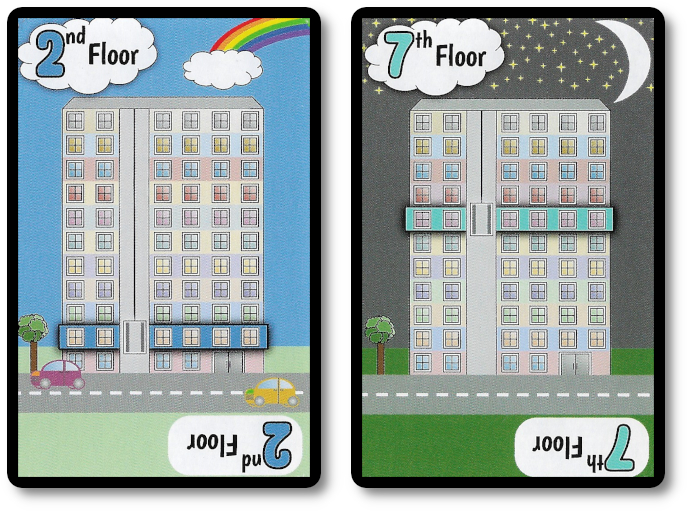 Players can also play a “Special” card. These do the following: 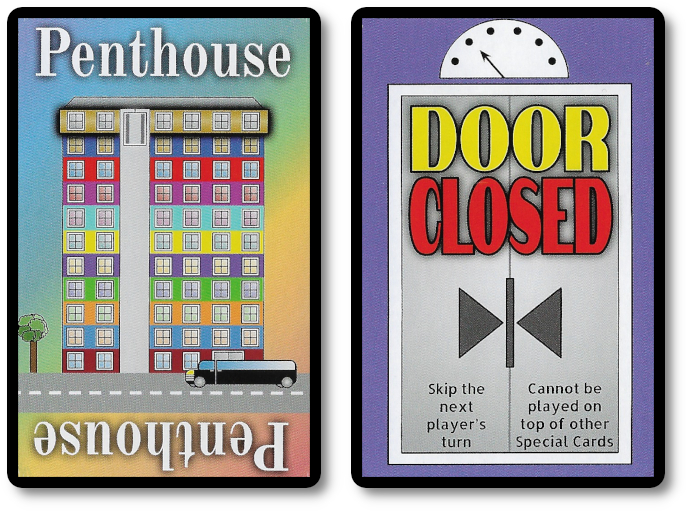 A player must have at least three cards in their hand at all times while the draw deck is available. They draw the number of needed cards to bring their hand size back to three from the draw deck if they do not.

And the Game Continues

Eventually, the draw deck will be depleted. Once this occurs, players will skip drawing from the now non-existent draw deck. Instead, they will continue to play from their hand.

Once all the cards in the player’s hand have been played, they then use their two face-up cards.

Finally, once the two face-up cards are played, the player picks up their three face-down cards and plays those. But you play these cards very, very differently. Players pick one of their face-down cards without looking at it and flip it face-up to the discard pile. If the card is HIGHER than the current Floor card or a “Special” card, the player’s turn is over. However, if this is not the case, the player picks up all the cards in the discard pile and now plays those cards during their next turn.

The first player to play their last card wins the game!

To learn more about ElevatorUp, visit the game’s website.

The Child Geeks enjoyed themselves a great deal. The card game has a fun “take that” mechanic that is not directed towards any player but always feels satisfying when you skunk the next player in line. According to one Child Geek, “The game isn’t hard, but you need to think about what cards you want to play in your hand so you can always keep going. I like it when I play a card that the next player cannot do anything with.” Another Child Geek said, “I liked the game. I think it made me think about my next cards to play, but I didn’t feel the game was stressing me out.” All the Child Geeks agreed that ElevatorUp was a game worth playing, enjoying the ride to victory just as much as their ride to defeat.

The Parent Geeks also found ElevatorUp to be a good time. According to one Parent Geek, “This is a game I couldn’t put in front of my youngest kiddo (age 5), but my two other kids and my wife really enjoyed it. It isn’t an easy game to win, but players don’t have many hard choices to make either. I never felt stuck, and even when I had to take the discard pile, I never felt too bad about it because it just gave me more cards to play. The end part of the game felt a bit jarring, as I had total control of my cards and then none, but it all worked really well.” Another Parent Geek said, “A fun game with the kids and the family. I liked how the different hands made the game subtly a bit different to play. I also liked how the game designer put in the blind play mechanic at the end. This let everyone catch up a bit and made the game feel more exciting.” When all the elevators had reached the top floor, the Parent Geeks all agreed to give the game their full approval.

The Gamer Geeks were not fans, finding the game to be little more than playing cards of ascending value until you couldn’t. Which, honestly, is the game. According to one Gamer Geek, “Full props to the young game designer and for making a game, but this isn’t a card game for me. I didn’t find it engaging, and the level of thought I had to put into my card plays was minimal at best. There is a little bit of strategy and tactics to be found, but not nearly to the level I look for in a game.” Another Gamer Geek said, “I think we have a great little card game for families and kids. For just adults and an elitist like me, this game never reached the top floor. I would recommend it for casual players and children only.” When all the votes were in, the Gamer Geeks all voted to reject ElevatorUp but recognized that it was a card game not meant for them.

ElevatorUp is a simple game of math and light decision-making. Never to a point where the brain boils, mind you, and nor can you easily determine if your previous move helped you or hindered you. The game is all about “what do I do now that makes the most sense,” which is really good for families and young or inexperienced players. Games with a lot of depth, strategy, and tactics tend to “punish” the player if they aren’t thinking it through. Not the case for ElevatorUp. It’s a game designed to be a fun activity with simple math and surprising outcomes. To which I say the game succeeded.

I do want to take a moment to discuss the end game, as I found it to be a rather intelligent way of slowing the game down and letting other players catch up. You won’t find anyone who enjoys a game that allows the current player in the lead to “runaway” with a victory. Every player wants a chance – or believe there is a chance – to steal the win. ElevatorUp does this in a unique way that both slows down a player’s advance and makes the game more interesting to that player as a result.

When you play your cards from your hand, your opponents have no clue if what they play will help you or not. This is pretty standard and works well. When the player moves to the face-up cards, all the player’s opponents now have the option to select a card from their hand that will hinder the player—a pretty neat idea. Finally, when the player has only their face-down cards left to play, the player’s opponents can do nothing to slow the player down, but the player becomes their own worst enemy. Pick the wrong card at random, and the player might have a fist full of cards to deal with. Pick the right one, and you feel like you’ve accomplished something of great importance. Either way, the game moves on, but the player in the lead might have lost their advantage, making victory now obtainable for their opponents.

If you are looking for a new family-friendly card game to play at your table, do give ElevatorUp a chance. I think you’ll find the ride, while up and down, will always leave you feeling like it was worth the trip.