Sheeple: The Best Game in the Ewe-Niverse, designed by Aaron Smith and to be published by A Smith Games, will reportedly be comprised of one game board, ten Characters, 108 Category cards, 42 Sheep cards, and one sand-timer. As this is a review of a prepublished game, I cannot comment on the game component quality. The artwork primarily emphasizes what the world would look like it if was populated by human-like sheep…which are doing human things. Not included with the game, but necessary to play, is a pad of paper and a pen or pencil to write with.

To set up the game, first place the game board in the middle of the game playing area and within easy reach of all the players.

Second, give to each player a Character and something to write on. Each player should place their Character on the starting space found on the game board. 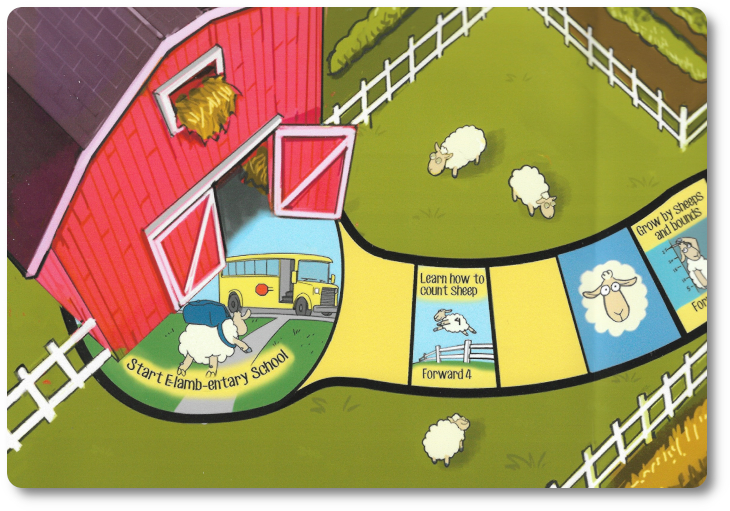 Third, shuffle the Category and Sheep cards, placing each in a separate deck, face-down.

Stay With the Flock

Sheeple is played in rounds and turns with no set number of rounds per game. A single round of game play is summarized here.

Step One: Gather the Flock

The active player is referred to as the “Shepherd”. The Shepherd now  draws a Category card and selects one of the three listed categories to use for this turn. When the Shepherd has selected a category, they tell the rest of the players (the “Sheep”) to get ready. The Shepherd then reads their selected category out-loud, turning the sand-timer over. 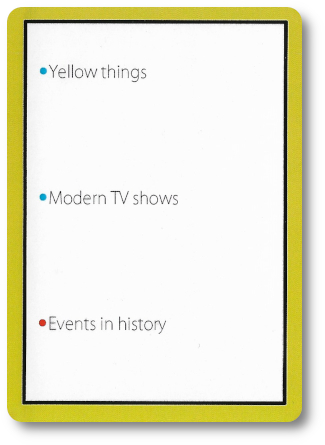 All the Sheep now write down as many items as they can think of that match the category selected by the Shepherd. An item can be any object, person, place, idea, action, a descriptive word (for example, “jump”), or a phrase. Essentially, anything. The catch here is that the player is trying not to think too outside the box and be creative. Each player should think of words that are common and will most likely be used by the other players.

When the sand-timer has finished, the Shepherd should shout “Stop!”. All players can now complete the word they were in the process of writing and put down their pen or pencils.

All Sheep now review their lists with each other to score points. Any items that were stated out-loud, prior to scoring, or were used as an example in the category are now crossed off. These will not be scored.

After an item is read, it’s crossed of the Sheeps’ lists. This continues until all Sheep have read their lists.

The round is now over, but before a new Shepherd is selected (which will be the next player in the turn order sequence), the player’s Characters advance on the game board. For each point earned, each player moves their Character on space on the game board. When a player lands on a space with a description, they read it out-loud and resolve it. If a player lands on a space with the face of a sheep, they draw a Sheep card and resolve it. Game board spaces will force the player’s character to move forward or backwards additional spaces. 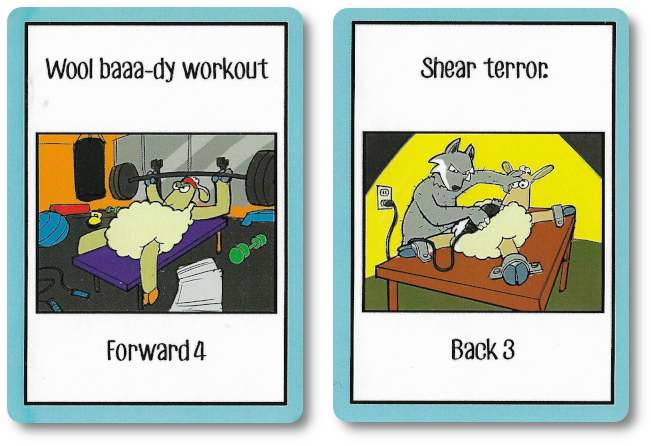 The round is now over and a new round begins with a new Shepherd. 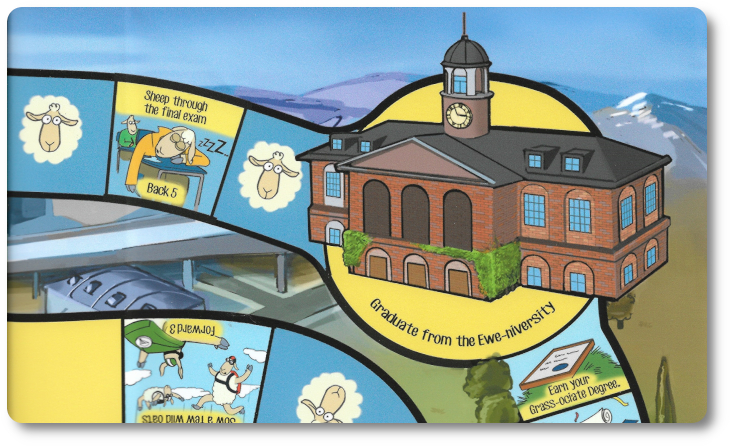 When playing with children (i.e. “lambs”), use the “lamb-friendly” categories noted with a blue dot on the Category cards. Limit the number of items needed and pictures and symbols are considered “legit” since some children cannot spell very well yet or write quickly.

Team play is possible (i.e. “flocks”) in Sheeple. Teams work together to create a list of items and use only one Character on the game board.

For an extra twist, players can work sheep puns into their items. If a sheep pun has a match when reading them out-loud, the player scores an additional point.

To learn more about Sheeple, visit the game’s website or visit the Kickstarter campaign.

The Child Geeks had a wonderful time, thinking up words and scoring them. In fact, of all the players, the Child Geeks scored the most points, but only when playing with other Child Geeks. The current theory is that the Child Geeks, being mostly around the same age, receiving the same level of education, and interested in the same things, all share a similar vocabulary. This resulted in the Child Geeks thinking a lot of like. According to one Child Geek, “I really like this game. It is fun to think of words that match the category, but also words that others will think about.” Another Child Geek said, “The best part of this game is trying to think of sheep puns and funny jokes. This game made me laugh a lot.” Yes, it does, but not because the game itself is funny. More along the lines of people laughing at the items they list. Some of which are flat-out bizarre. The Child Geeks all agreed that Sheeple was a game they’d gather around the table for again.

The Parent Geeks also found the game to be entertaining. According to one Parent Geek, “Unlike other games that challenge the player to think of unique things, this game does the complete opposite. I actually found that to be more challenging.” Very true! In some respects, the game is asking you to think like your opponents, but at the same time, you want to think uniquely enough to ensure there is a match, but not a lot. You get more points for being slightly unique and no points being completely unique. It’s an interesting balance. As one Parent Geek put it, “You really do need to think like the rest of the sheep in this game to win big!” All the Parent Geeks agreed that Sheeple was a game they enjoyed, fully endorsing it.

The Gamer Geeks found the twist in how you score points to be interesting, but the game never tugged at their heart-strings. According to one Gamer Geek, “I different twist on a common party game experience. I like the direction, but the game just didn’t do it for me. I’d play it with the right group, but it isn’t a game I would go out of my way to play with my elitists friends.” Another Gamer Geek said, “A solid game that I found to be enjoyable, but not overly engaging. Like most party games, the fun you have is based a great deal on who you play the game with. If I were to play this was adults with drinks, I think I’d have a good time. But the game board has got to go. Horrible addition to an otherwise likable game.” In the end, the Gamer Geeks couldn’t find anything wrong with Sheeple other than it was a game that just didn’t grab and keep their attention. As a result, the endorsement was mixed.

I like the twist Sheeple puts in the game. It’s surprisingly easy to think of a word that others will match, but only for the first three or so. After that, you start to have problems. And believe me when I say that only having a minute to write as many words as possible feels very short. There were some categories where I couldn’t start writing and others that I couldn’t stop. The real fun comes in making words just unique enough to score big points. When the game first starts, you don’t much care if you get one or three. As the game progresses and it becomes a race, each word becomes very important. Which, of course, makes thinking of words harder.

The only aspect of the game I dislike is the use of the game board. It isn’t needed. In fact, it feels like a cheat. Most players agreed that just keeping track of points on paper or just a score track would be better. I totally agree and am confused why the game designer added a game board that subtracts and adds points the players work hard to earn. Doing so reduces a game that is based on skill, wit, and insight into a randomized kids game. Which, to a point, I guess it is.

True, you could try to think of just enough words to only move so many spaces, but good luck with that. You won’t, you can’t, so don’t even try. This, sadly, made the game at times feel really horrible. You scored big and moved forward! Awesome! Oh, shoot! You landed on a space that moves you back three spaces! Sorry, sucker, you actually lost ground this round.

Not great. The game essentially punishes you for playing. Not all the time, but enough where the game board feels like it’s reducing the game’s enjoyment.

Other than that, Sheeple is a fun game. Especially when you add in the extra points for sheep puns, but a word of warning here. Puns tends to repeat themselves, ad nauseam. To a point where they are fun, but quickly become uninteresting and eye-rolling. Add them in with the right group and you are golden. Just be aware that like most puns, they will start to make you grind your teeth in disgust rather than laughing.

If you are in the mood to think like a group, which takes a surprisingly amount of withheld creativity, do sit down for a game or two of Sheeple. You might just fine it’s the game for ewe.