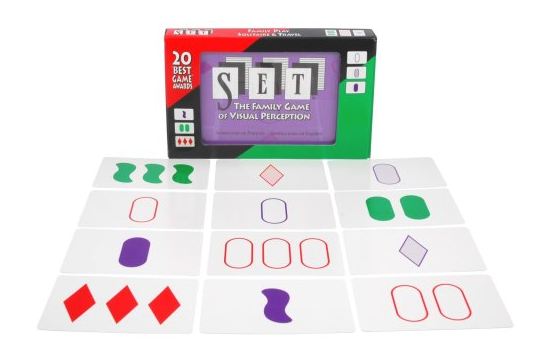 Set is a set collection card game. The game consists of 81 cards with symbols, spanning all permutations of the following four traits:

Setup is essentially instantaneous. The deck is shuffled and 12 cards are dealt face up in the middle of the playing area. As soon as any player sees a set of three among the face-up cards, they yell “set” and then indicate to the other players which cards they are claiming. A claimed set removes them to the player’s scoring pile. Another three cards are dealt so that there are 12 face-up cards again.

If no set can be identified, another 3 cards are dealt face-up so that there are now 15 cards showing. However, after a set is claimed, cards are only replaced if there are fewer than 12 cards in the center.

A player’s score is penalized if a player claims a set incorrectly, but this rule can be ignored unless one player is consistently making premature calls. 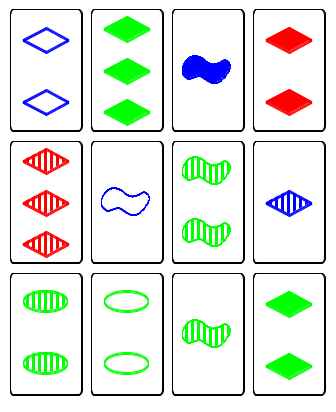 The game ends when all cards have been dealt out and there are no sets left to claim. Players then count their claimed sets. Whoever has claimed the most sets wins the game.

To learn more about Set, see the game’s official web site. There is also a Flash-based tutorial if you would like to learn how to play the game.

Some regular gaming friends lent me this game and insisted that my little geeks would not only love it, but would soon be trouncing me at it. I nodded in feigned agreement, not doubting their enjoyment, but fairly sure that I would have their measure in findings sets.

Despite being forewarned, I was surprised how quickly my little geeks grasped the concept of this game. It is easy to understand, rather more difficult to explain. The first time we played, I won quite comfortably, not by any means a walkover though. Subsequently, I have struggled to keep up with my 7-year-old son and my 5-year-old daughter is not far behind.

This is a great game for dining out, to keep everyone occupied while waiting for food to arrive. Players should take care not to yell, disturbing other diners, nor to lunge for cards, knocking over cutlery or glassware, but we soon learned to play in a non-disruptive manner. 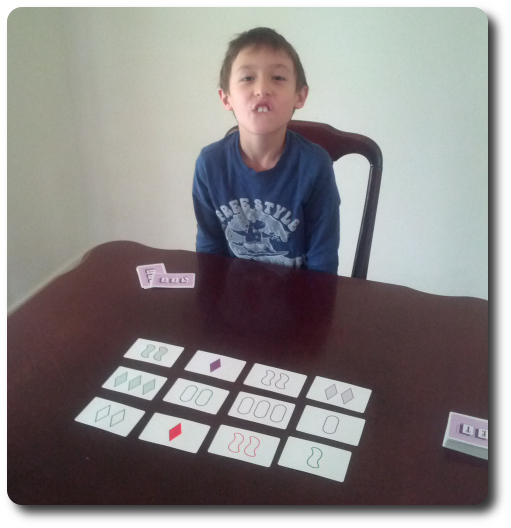 Playing the game and having fun – ignore the teeth

For Gamer Geeks, this is an amusing exercise in mental agility, similar to solving a Sudoku puzzle, but like Sudoku, the novelty wears off quickly. It is not so much a game as simultaneous puzzle-solving, and a not very difficult puzzle at that. Even though I consider myself a Gamer Geek, I still enjoy Set a great deal; it is a welcome change of pace from my usual fare.

Parent Geeks will recognise a game that is fun for them but also allows their little geeks to compete on an equal footing.

Child Geeks will grasp the core concept within minutes and the sense of satisfaction from being first to identify a set is more meaningful than the final score.