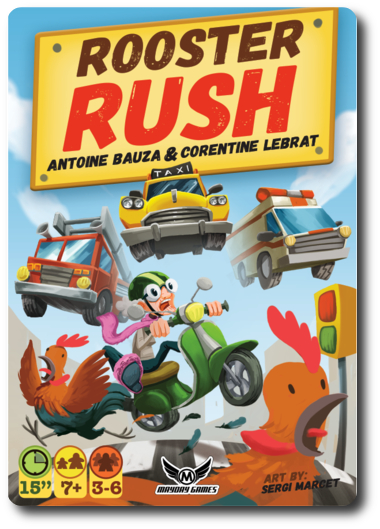 There is an old joke about a chicken that crosses the road. It’s a horrible joke, and yet, as a species, we keep asking ourselves this same question, attempting to frame the answer in a comedic way for reasons that can never be truly justified. Most of the time this joke produces a groan. In this game, there is no joke to laugh at. Your chicken’s life depends on a sharp eye and quick reflexes.

Rooster Rush, designed by Antoine Bauza, Corentin Lebrat, and published by Mayday Games, is comprised of 40 Crossing cards, 1 Red Button card, and 5 Vehicle tokens. The component quality is excellent. The cards are as thick and as durable as your standard playing card and the Vehicle tokens are weighted plastic Poker chips.

To set up the game, first place the Red Button card in the middle of the play area and within easy reach of all the players.

Second, shuffle the Crossing cards and place it face down in a deck to one side of the Red Button card. This is the draw deck for the duration of the game.

Third, place the Vehicle tokens in a small pile off to one side of the game playing area.

That’s it for game set up. Time to make some chickens run.

Rooster Rush is played in rounds with no set number of rounds per game. All players participate in the game simultaneously until they are either knocked out of the game or the game comes to a conclusion. A typical game round is summarized here.

Each Crossing card back has the image of a vehicle that will match one Vehicle token. Identify these tokens now and remove them from the pile of tokens that were set to one side of the game playing area. If a vehicle is shown more than once, you still only get the one Vehicle token that matches it. Depending on the cards drawn and the number of players, you will have one to four tokens.

Randomly distribute the Vehicle tokens (or have players select their favorite). Some players may not have any tokens. Any Vehicle tokens not selected are out for the duration of the game.

One player should now flip over each of the dealt Crossing cards in the row. One or more vehicles will be shown, along with some other images (like traffic cones) that are meant to provide a bit of thematic feel and cause a visual distraction.

After looking over the face-up Crossing cards, players simultaneously spin their Vehicle tokens in a central area where all players can view them. Spinning the token can be done using whatever method the player likes. The intent is to have the token spin so the side on which it will eventually land is not readily obvious. Do not flip the token like a coin, as that doesn’t work. If one or more Vehicle tokens are not spun properly or fall to the floor, re-spin all the tokens.

As soon as the Vehicle tokens are spun, players can select one of the face-up Crossing cards. The First player to touch the card gets it. The Red Button card can also be claimed at this time.

Once a player touches a card (by placing their finger on it or slapping it with their hand), they cannot remove their hand until all tokens have stopped moving. A player can, if they believe it to be the best course of action, claim the Red Button card. Doing so indicates that the player believes that none of the Crossing cards are “safe”. A player can also elect to not select any card. Once the tokens stop spinning, any player who has not yet selected a card cannot select a card until the next round. 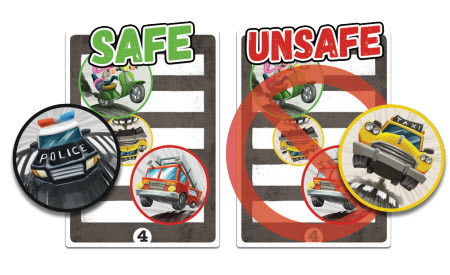 If a player ever collects three “unsafe” Crossing cards, they are out of the game. Any cards they may have collected are discarded.

The Red Button card is now returned next to the draw deck, any unclaimed Crossing cards are discarded, and all the Vehicle tokens are collected. The next round can now begin starting with step one noted above.

The game continues as noted until all the players but one are out of the game or one player collects “safe” Crossing cards with a combined point value of 11 or more.

There are at least four expansions to the game as of the publication of this review. These include the Designer Pack (which shows an illustrated image of the two game designers on vehicles) with matching Vehicle token, a Thick Mist Pack (clouds cover the vehicle icons making them difficult to see), Heavy Rain Pack (similar to the Thick Mist Pack, but adds rain drops), and Traffic Jam Pack (which adds Crossing cards full of vehicle icons). All of these card expansions can be directly added to the base game. They do not add much to the game other than variety and a slight bump in the game play difficulty.

The Child Geeks had a good time, with the only initial difficulty focused on learning how to properly spin the Vehicle tokens. Ironically, I spent more time teaching how to spin a token to the Child Geeks than teaching them the game. Once they all had the spinning down, it was just a matter of picking the right card. According to one Child Geek, “Sometimes the right card to pick is really easy and sometimes you don’t want any of the cards.” Most of the time, which card to pick is not an easy task, especially if they have more than one vehicle icon. But all the Child Geeks agreed that the process of selecting the right card was a fun exercise. As one Child Geek put it, “Each round is new! You really have to pay attention to those cards and tokens!” When all the games were over and various chickens were either safe or flattened, the Child Geeks voted to approve Rooster Rush.

The Parent Geeks found the game to be entertaining with their children, but not a great deal of fun with just their peers. According to one Parent Geek, “An easy enough game to play, but it just never felt all that exciting, nor was I ever that interested.” Since players are not penalized for taking the Red Button card or not picking any card, each round became an exercise in just waiting until the last possible moment to select the right Crossing card. If they didn’t, no big deal. If they did, they got points. This was repeated each round and the Parent Geeks began to lose interest. As one Parent Geek put it, “This is a game that only feels like fun if you artificially stress yourself out about picking a card each time for points. I wish you were penalized for not picking a card, but slightly less so then when you picked an unsafe card. That would make it more interesting.” The Parent Geeks ended up giving Rooster Rush a mixed endorsement.

The Gamer Geeks were not digging this game whatsoever. According to one Gamer Geek, “There isn’t much to this game to begin with when you take it out of the box and there is even less about the game to get excited about when you play it.” Another Gamer Geek said, “A good game for the kids, but as an adult, this game bores me to death. There is nothing rushing here except my hopes that the game will end quickly.” Pretty harsh stuff and the Gamer Geeks didn’t stop there. Rooster Rush felt too formulaic, with little to no real interesting game play or difficulty from the point of view of the gaming elitists. They played it a few times, thanked me for introducing it to them, and then quickly put Rooster Rush way off to the side where it could no longer be seen.

Rooster Rush is a very simple game. Its charm lies in the simultaneous game play action. And that’s about it. Even the Child Geeks got a bit bored with it before their game was even over. The game never reaches a point where the players are feeling pressured, fraught with important decisions, or forced to push the limits. In short, there is little to the game that makes the player want to play it. At least, that was the observation of the majority of our players who sat down with it.

I found the game to be unremarkable and forgettable, but don’t tell the youngest Child Geeks I said that. They love the game. Clearly, Rooster Rush is best for the Child Geeks who are still learning the in’s and out’s of game play. There are no real tactics to speak of, the only strategy is to collect cards without getting out, and trying to guess (or not) before everyone else. Very straight forward and easy to grasp for the inexperienced and a whole lot of nothing for those who are. Give the game a try if you think you have the right audience for it. As for me, I now know why the chicken crossed the road. It wanted to go play another game.