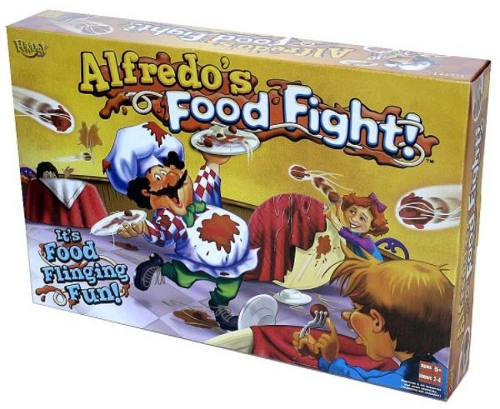 In the game, Alfredo’s Food Fight, players race against each other using their meatball catapults to launch their “meatballs” at Chef Alfredo, who spins slowly in the center of the playing field. The first player to successfully stick all three of their “meatballs” to Chef Alfredo wins the game. The game plays quickly in about 5-10 minutes and has been very entertaining for my little geeks, ages 4 and 7.

While this connection works well for the most part, it is not as sturdy as I think it should have been. The flat figurine of Chef Alfredo is fairly heavy and it does not take much to crack the connection between Chef Alfredo and the base. Parents will want to watch over the kids when pulling off the meatballs, which can stick very tightly to the velcro target. I was able to fix and strengthen the connection using an epoxy. The repair has held for quite some time with care, but I can see myself having to fix it again in the future. 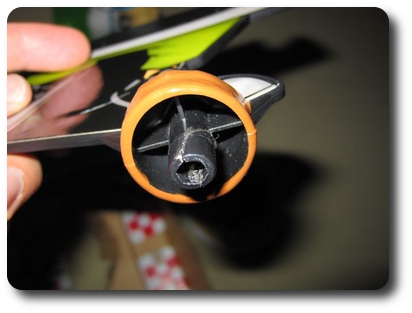 The result of my little geek’s wrath

On a player’s turn, they take a “meatball”, place it onto their fork catapult and fling it at the spinning Chef Alfredo in the center of the playing area. This mechanic is very similar to that used in the game, Ants in the Pants, except the target moves instead of being stationary. Both my little geeks were able to operate the fork catapult with ease. Hitting the target was another story. My daughter has mastered Ants in the Pants to the point that she rarely misses. She hasn’t mastered Alfredo’s Food Fight…yet, so it still offers a challenge not present any longer with Ants in the Pants.

Play continues until someone wins by getting all three of their “meatballs” on Chef Alfredo. 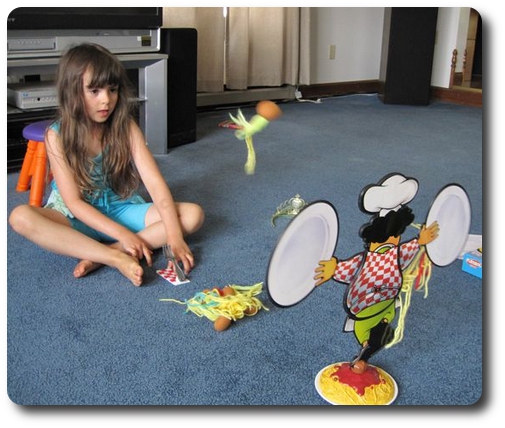 While both my little geeks like playing this game, I think Erika (age 4) enjoys it more than Kyan(age 7) and MUCH more than I. Due to the short play, we can get several games in and quit when it tires on us. Typically, we play about five rounds, which takes about 25 minutes at the most before moving on to something else.

Alfredo’s Food Fight is a nice filler that serves as a quick distraction when deemed fit. While my kids could play with it for more than 20 minutes at a time, that is about the limit for an adult. For the target audience, the game works well.

If your kids like the idea of flinging food at a hurried chef and need a bigger challenge than Ants in the Pants, Alfredo’s Food Fight is worth picking up.

Need more info? Here’s the product video in all of its low-budget glory.