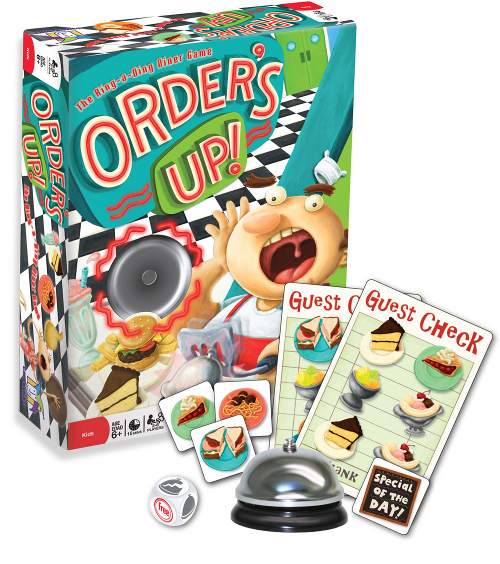 In Order’s Up!, each player takes on the role of a waiter or a waitress with one or two very busy tables full of hungry and very demanding guests. The kitchen has taken the orders and is making the food as fast as they can. The problem is, only one food item can be served at a time! That means the players have to compete to be the first ones to grab the food and give it to their guests before the other players do.

At the beginning of the game, each player is randomly dealt one or two guest checks, depending on the number of players in the game. Each guest check has six random food items ranging from drinks to desert. The images on the guest checks are colorful and easy to identify and that’s a very good thing, because the players will be trying to match those images on their guest checks to the tiles as quickly as possible. Speaking of which…

The tiles represents one food item each. There are exceptions to this rule. Included in the tiles are four “special” tiles. These are “Free Refills”, “Free Entrée”, “Free Dessert”, and “Special of the Day”. All of the tiles are shuffled together and four are randomly drawn and placed in the center of the table, face up. The area where the tiles are shown is referred to as the “Serving Area”. The rest are separated into four more-or-less equal piles and are placed within easy reaching distance of all the other players. Ah, but when placing those four initial tiles, leave room for the main game attraction!

The star of this game is undoubtedly the call bell. This is the same type of bell you will see sitting on desks or counters at offices, school rooms, hotels, various stores, and of course, restaurants. Expect and even suggest that all the players give the call bell a good testing before the game begins. This will be loud, but the sound of the call bell will soon be drowned out by the laughter.

Last, give the first player the single six-sided die. You are ready to play! READY! SET! SERVE!

On a player’s turn, they roll the die. The die will result in one of 5 possible actions. Those actions are as follows:

Once the die has been rolled and the action taken, the die is passed to the next player.

As previously mentioned, the tiles represent the food items. Four of the tiles are special. They are as follows:

These four “wild” tiles can also be rearranged by the player once they claim a tile that can be substituted for it. For example, if the player successfully claims a drink tile that matches a drink on their guest check, they can immediately swap it out with a previously placed “Free Refills” tile. The player then moves the “Free Refills” tile to any other unclaimed drink item on their guest check.

There are only two additional rules. The first is that there should always be at least four tiles in play at all times. If at any time there are less than three, immediately draw a number of tiles necessary to fill the Serving Area with four tiles. This should be done before a player rolls the die.

The second rule is a two-parter and involves the call bell. The players can never “hover” over the call bell. I helped my little geeks with this rule by making certain they had their hands, palm down, on the table in front of them before the person rolled. If, and very likely, a player rings the call bell when the die roll did not call for it or if they ring the call bell when they shouldn’t have because of previously rolling Break! on their turn, the player is penalized by having one of their tiles removed from their guest check and placed in the Serving Area. This tile is selected by the player.

And that’s the game. The first player to match all the items on their guest checks with tiles wins and goes on to own a successful chicken and waffle franchise.

My little geeks and I love playing this game. It’s fun to see them get so involved in a simple mechanic that actually requires a good deal of self control. I am always impressed when I see my 3 year-old instinctively move towards the call bell, regardless of what is rolled, only to stop himself inches away from smacking the bell. Pity he doesn’t show such self control in other aspects of his young life. But, hey, he’s 3. I think I can cut him some slack.

Included in this game are three important Geek Skills. The first is hand/eye coordination. It might not look it, but smacking that call bell is not as easy as it sounds. We must take into account that all the players are attempting the very same action. In order to be the first player to ring the call bell, you must have excellent hand/eye coordination, not to mention fantastic reflexes. Your little geeks won’t be catching flies with chopsticks because of this game, but it won’t hurt their chances of doing so, either.

The second Geek Skill is the memorization and pattern matching. The players will need to match a tile to items on their guest check. Before you scoff and smugly say “that’s easy”, keep in mind you are an adult and have years of practice. My sons had some initial problems in this area when they first started playing matching games. It might very well be because there is so much to look at. A single card only has 6 items, but if you are playing with 2 cards, you now have to manage 12 items. Not to worry, their young minds will quickly grasp the concept and there is no imposed time limit when it is their turn to grab a tile.

The third and possibly most challenging Geek Skill to work on is the direct result of being forced to swap a guest check. This tends to be something of an emotional kick in the teeth if you are very close to getting the guest check completed. When one of my little geeks gets to take an adult’s guest check, hilarity ensues. When a little geek looses their guest check, usually tears follow. And why not? They have invested their time in getting that guest check filled and then they have it swiped from them. This is where the adults get to practice strengthening the little geek’s Emotional Coping Skills. Essentially, this is the “attack element” of the game. It allows one player to single out another. No one likes feeling picked on or victimized. Do expect to pause the game the first couple of times until your little geeks understand that it is just a game.

Lastly, the recommended age range for this game is 6+. Don’t you believe it. I had no problems playing the game with my 3 year-old. Your game experience will vary based on your little geek’s abilities, but don’t shy away from this game (or any game, for that matter) simply because your little geek’s don’t make the age range cut. Buy the game if it sounds interesting, and let your little geeks growing into it, like a sweater made of game bits.

Do give this game a try. It’s fun, fast, and will leave you feeling full and satisfied when you push away from your family gaming table.