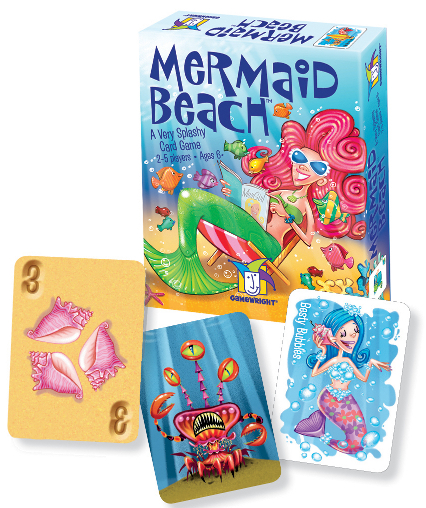 Remember the last time you were at the beach? For those of you who live on the coast, it wasn’t that long ago. For those who live inland, we have nothing but memories to cherish until we get another opportunity to slather on the sunscreen and cinch up the bathing trunks. But while we wait (and lose weight), we can play Mermaid Beach! A fun and fast card game with light aggressive player interaction and smart game play.

Mermaid Beach is a card game comprised of 77 cards. The cards are separated into two groups: Beach and Shell cards. Each group has a different card backing illustration that makes it easy to separate. The artwork on the cards is fun a colorful, with an extra bonus of also being sparkly! Contained in the Beach group are 5 Mermaids, 5 Mermen and 2 Mean Mermaids who have sparkly borders, which is honestly, just plain cool. The cards themselves are made of standard card stock and are durable allowing you to enjoy the game for many game plays to come. Another quality product by Gamewrite!

Divide the deck of cards into the two different groups, Beach and Shell, which should be easy to do as the different groups have their own unique card back illustration. Shuffle the two groups thoroughly to create a Beach and Shell deck. From the Beach deck, deal each player 5 cards, face-down. If playing a 2-player game, deal each player 7 cards. The players should keep their hand hidden from the other players at all times.

Place the remaining cards in the Beach deck and the Shell deck face-d0wn in the middle of the playing area where all the player’s can easy reach them. You are now ready to play the game!

All The Things You Find At the Beach and Then Some

The cards in Mermaid Beach depict everything you’d find during your next beach vacation. Shells, seaweed, boats, sandcastles, and all the rest. There are a number of special cards that deserve more detail as they can heavily influence the game or require the player to take a special action.

All the rest are either Beach cards with illustrations on them depicting things you’d find at the beach, Shell cards for points, or the Good Mermaids/Mermen. Note that you can tell the difference between the good and mean mermaids by the color of the sparkles around the card’s border. The Good Mermaids/Mermen have a silvery sparkled border while the Mean Mermaids have a darker sparkly border and darker character background.

Discard a Pair of Beach Items

Ask an Opponent for a Beach Item

When a player is given an opportunity to pick a card from the Shell deck, there are only two cards that can be drawn. These will be either Shell cards, which are placed immediately in front of the player for points, face-up, or a Starfish. The Starfish will have text that states in which direct each player will need to pass one of their cards. The Starfish card is then placed in the Shell discard pile.

Regardless if the card drawn is a Shell or a Starfish, the player’s turn is over.

The game ends when one of the following two conditions are met: 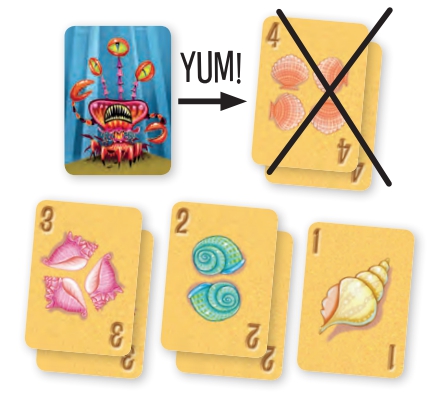 To learn more about the game and to read the complete rules, see the game’s official web site.

It is suggested you remove the Mean Mermaids and Sneaker Waves from the game if you are going to play Mermaid Beach with very young little geeks.

My little geeks continue to favor the card games when asked to choose either a board or card game to play. Most likely because card games take very little time to set up and play. Little geeks are busy people, after all, and downtime is unused play time.

Mermaid Beach has several game mechanics that are already familiar to my little geeks such as passing cards (like Go Fish), getting rid of unwanted cards (like Old Maid), and collecting sets (like Hearts). This should make the game very easy to teach. It also helps that Mermaid Beach is not a very complicated game, rule wise.

After explaining the game to my little geeks and providing several examples of how the cards should be played, I opened the floor to any questions they might have while I shuffled the decks and dealt each player a starting hand. No one had any questions (a good sign), so I asked them their thoughts on the game so far.

While my little geeks appear to be somewhat lukewarm on the game theme, I believe they will be pleasantly surprised at the amount of player interaction and competition. Let’s find out!

Girls game or no, Mermaid Beach is a lot of fun to play. It’s fast, furious, and surprisingly aggressive for a little geeks game. Made even more surprising that the theme and narrative deal with sparkly mermaids. As soon as we started playing, my 7-year-old, put on his game face as he realized this was a game that did not take prisoners! Set all the mermaid glam aside, and you’ve got yourself a very competitive game.

Unfortunately, because it was a fast-paced game and pretty aggressive, my 4-year-old started to get frustrated and eventually quit, allowing me to take over his hand. The game was just a bit too much for him to keep track of with all the cards shifting back and forth. He is more than capable of playing this game, but he just wasn’t feeling it. My 7-year-old, however, was enjoying every minute of it! He immediately grabbed the cards and started to shuffle them when the game was over, demanding another game! No one at the table minded and helped get the game going again as soon as possible.

I had to remind myself several times that this game was designed by an 8-year-old named Emily. It certainly didn’t play like a game an 8-year-old would design. Mermaid Beach is well-balanced, fast, fun, and engages the players from start to finish. This is not an easy feat to accomplish. There are game designers right now pounding their fists on table tops out of frustration because designing a game is difficult work. And yet, this 8-year-old little girl made it seem effortless. The game feels like it was designed by a more seasoned game designer, and for that reason, I must tip my hat to this young little geek who has to be one of the youngest game designers to successfully publish a game. And a really good one at that! 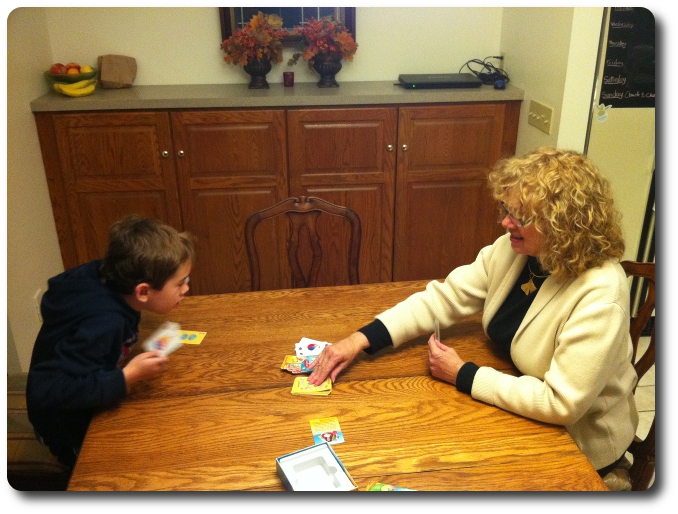 My 7-year-old and his Nana play a quick game while dinner is being made - notice how he is pouncing!

Gamer Geeks, Mermaid Beach is a fun and fast game with a light level of character interaction and aggression. Yet, it falls short of being Gamer Geek approved, but just barely. It is just a bit too simple, a bit too light, and a bit too easy to be a “gamers” game. It’s perfect for the age group and for families, but the game elitist won’t have much use for it. A pity as I’m sure there are a lot of gamers who would enjoy Mermaid Beach. Consider picking it up for your little geek in training and prepare thyself for fun!

Parent Geeks, wow! Mermaid Beach is a wonderful game to play with your little geeks, family, and friends. It’s theme masks a rather aggressive and fast-paced game that is borderline cutthroat as the players rush to collect as many points as possible. The game mechanics and rules are simple, but does require basic reading skills to play effectively. Only a few cards have text on them that will need to be read, but everything else is picture matching. This is also a great game to play with non-gamer friends and their little geeks if you are trying to get them more involved in the hobby.

Child Geeks, don’t let the pretty mermaids and their flashiness trick you. These fun-loving people of the sea are all business when it comes to collecting shells! Avoid the sea monster and collect shells as fast as you can because the rest of the players will be doing the same! It’s a great deal of fun to pass the sea monster to a family member or friend and see their faces! You’ll need to play smart, but you won’t be overworked or overwhelmed.

I am very pleased with Mermaid Beach and am always happy to play a couple of games with my little geeks. It’s a lot more fun than Go Fish, Old Maid, or Hearts, and yet has the same game mechanics of all three included resulting in a fun game for everyone to play. The player vs. player aspect of the game is light and does not allow for any single player to bully or be the target over and over again. This is a very good thing as young little geeks are not yet accustomed to or have the emotional coping skills necessary to realize that it is just part of the game. And like all the games we play with our family and friends at the gaming table, the goal is to have fun and be together. Mermaid Beach is a prefect game for such an activity and will most certainly be a hit with you and yours.