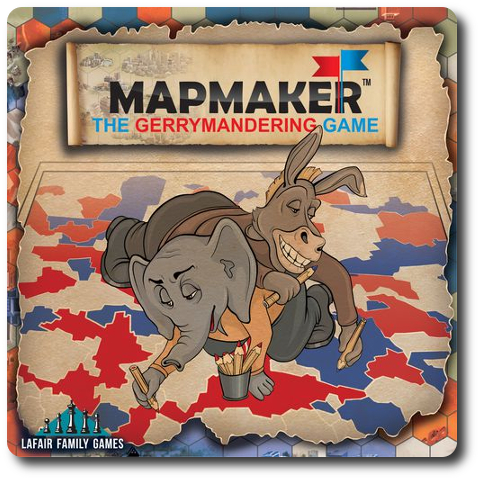 Ancient Roman statesman, orator, lawyer and philosopher, Marcus Tullius Cicero, said “Nothing is more unreliable than the populace, nothing more obscure than human intentions, nothing more deceptive than the whole electoral system.” He died, by the way, for political reasons, so we can properly assume he knew what he was talking about. In this game, physical death by sword is not a possibility, but a political death is only a vote away.

Mapmaker: The Gerrymandering Game, designed by Louis Lafair and to be published by Go! Games, will reportedly be comprised of 1 game board, 110 District Boarder pieces, 75 Voter tokens (in 4 different colors, 18 per color), and 28 District markers (in 4 different colors, 7 per color). As this is a review of a prepublished game, I cannot comment on the game component quality. There is very little artwork to speak of, which is more of a result of the game components than the game’s theme. After all, politics is very colorful, but unlike the real thing, Mapmaker: The Gerrymandering Game is far from messy. Every game piece has a specific purpose, coming across as very minimalistic and ordered in its presentation and play.

To set up the game, first place the game board in the middle of the game playing area. Everyone should huddle around it and lick their lips hungrily. Look at all those juicy voters!

Second, have each player select a political party (red Elephants, blue Donkeys, yellow Porcupines, or green Leaves). What?! A four-party system?! This will never work! Give to each player their selected District marker tokens. Place any political parties not selected and their matching Voter tokens and District tokens back in the game box.

Fourth, place the District Boarder pieces into a small pile off to the side of the game board where every player can reach them.

That’s it for game set up. Now its time to slice up the county like a warm pizza covered in delicious political toppings. Determine who should be the first player and begin.

The Politics of Politics

Mapmaker: The Gerrymandering Game is played turns with no set number of turns per game. A player’ turn is summarized here.

The first thing a player does is select a District Boarder piece and places it on any unoccupied line that divides the game board spaces. District Boarder pieces need not touch any previously placed pieces. This means a player can go off and start cutting up an entirely different section of the game board, leaving their opponents to squabble over obviously less important counties of interest.

The only restriction is that a player cannot place the District Board piece if it creates an enclosed game board space of three or less spaces, place in a previously claimed district, or on the edges of the game board. Those are already considered “blocked off”, as the outside most border is also the border of the state. 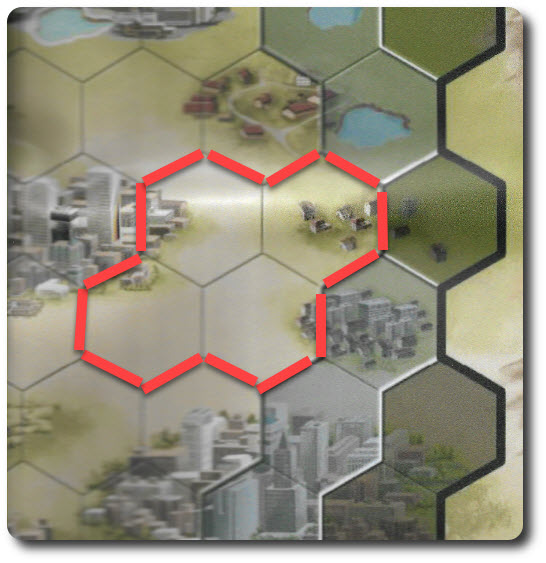 Example of a completed district

To put it another way, the placement of the District Boarder pieces in step one is very important. Players are starting to divide the countries into groupings. Depending on how the groupings are organized, a player could walk away with a large district or a normal sized one (which is always, at minimum, four spaces).

When a district is formed, players count the number of points of each colored Voter token, grouping the total per color. The color with the most points indicates the winner of that district who then places a District marker within. For example, if a district had a total of 9 red and 6 blue, the red Elephant player would place their District token. It’s important to note that the winner of the district will not necessarily be the same player who closed it off! However, if there is ever a tie among the players regarding who has the most points per district, the player who is currently completing their turn gets to decide who claims it among the tied players.

Yes, you can (and should) play political favorites.

To learn more about Mapmaker: The Gerrymandering Game, visit the game publisher’s website or visit the Kickstarter campaign.

The Child Geeks had a great time with the game. Good news, folks! You don’t have to know a thing about politics to enjoy this game about politics! The Child Geeks are proof-positive. Their only concern during game play was skunking their opponents. According to one Child Geek, “I don’t know what gerrymandering is even after you explained it, but it isn’t important. What is important is making sure you have all the points!” Another Child Geek, who was taking the game’s theme a bit more seriously said, “The best way to play the game is to always keep track of where districts are being made and work on several at a time. That way you always know you will get some points.” A very good strategy! When all the games were over the votes were counted and the big winner was Mapmaker!

The Parent Geeks enjoyed the game a great deal and used it to discuss politics in a very friendly way, but not always. Politics can be a passionate subject, especially in this day and age, and playing a political game ignited some of the player’s passions. When the conversation was about the game, it was always positive and bipartisan (if playing with two players, or tripartisan with three, or quadpartisan with four). According to one Parent Geek, “This is a very good game! I like how simple it is in execution, but the amount of strategic thinking and tactical placement of the game pieces really gets you thinking!” Another Parent Geek said, “I liked it for two reasons. The first is how simple it is to set up and learn. The second is how much fun I had playing it!” Between the evil giggles of district winners, the loud table discussions campaigning to win a district when it was in dispute, and the upset grumblings of players who lost a district, it was universally agreed that Mapmaker was a great time.

The Gamer Geeks thought the game was really simple and really light. They loved it. According to one Gamer Geek, “I was all kinds of certain I wasn’t going to like this game. All you are doing is blocking off spaces for goodness sake! But it is so much more than that. You need to think and scheme, play your pieces at just the right time, and work to ruin the day of your opponents. This is a great example of a light game that still makes its players work hard to earn their victory.” Another Gamer Geek said, “Easy game in theory, hard game in practice. I enjoyed it. It made me think just enough to keep me engaged, had me smiling and swearing.” When all the votes were in, the majority agreed that Mapmaker was a game they would invite to their elitist’s gaming table.

At first glance, this game looks really easy. I mean like “bonehead simple” easy. Play it for a couple of turns and you quickly realize that timing and proper placement of District Boarder pieces is everything in this game and exceedingly important. When you place a District Boarder piece, you can do two things. Either work on cutting off a piece of the pie for yourself or for an opponent. If you are doing it for yourself, you are going to want to do it quietly. Don’t draw attention to yourself! If you are doing it for an opponent, make some noise! Politics is, after all, about proper messaging…and finger pointing…and misdirection…and…jeepers…now I’m depressed.

Slicing up the counties to create districts is where the real challenge is at. Very easy to do so. Very complicated to do it right. And by “right”, I mean have a completed district that either belongs to you or belongs to an opponent who isn’t a threat. All it takes is one point more than the rest to win. And you really want to win. Having a district decided when there is a tie feels very similar to a tooth extraction. Yes, it’s over quick, but the process is painful. Players will bicker, taunt, promise, persuade, and even make outrageous claims of mistreatment or make impossible promises to persuade others to give the district to certain players.

Players will work hard for each vote. Each district will be fought for. Each point counted and recounted when a district is in dispute. When you leave the table, you will always feel satisfied, but not necessarily happy. Victory is never certain and I have seen players who were far behind suddenly jump ahead because their opponents weren’t paying attention. Watch your opponents carefully and the game board even more so. Do give this game a try when you can. I think you’ll find it will win the hearts and minds of the players.