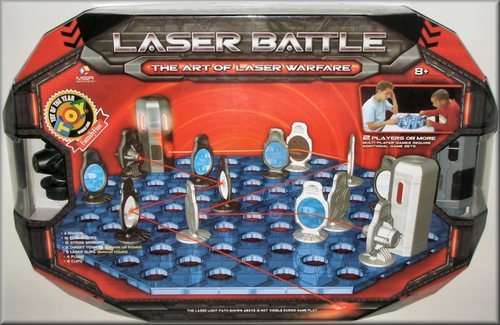 In Laser Battle: The Art of Laser Warfare, each player has one laser and one target each, as well as six upright mirrors. All the pieces are mounted on bases that can be placed in holes that are evenly spaced around the game board at a number of fixed angles.

On the player’s turn, they can move a mirror (leaving it at any angle they want) or rotate their laser, and then fire their laser. The first player who successfully bounces their laser off the mirrors to hit their opponent’s target, wins. I think there’s some rule about not shooting your opponent in the eyes with your laser, too, but it’s probably optional.

The lasers are real laser pointers, which jacks up the cool factor by quite a bit. These do need to be recalibrated every once in a while, but that’s not too hard to do. Everything else is just plastic, but acceptable in quality and durability. The board is assembled from four triangular sections and can be rearranged in a few different ways providing a level of customization.

The rule book offers a few variations on play: different ways to set up the board and different starting arrangements for your pieces. For example, one rule variation states that if you hit the back or side of an opponent’s mirror with your laser, that mirror has to be removed from the game. We haven’t tried that yet as I’m a little concerned it could lead to a situation where neither player could win.

For more information on this game, take a look at the official rules.

This game is simple and quick. My 7-year old grasped the rules in about a minute. For her, and I imagine other little geeks, the difficult part was thinking about how the lasers will bounce off the mirrors, and planning ahead to get the right setup. But I believe this level of difficulty is also the game’s educational merit. If we play this enough, she’ll be an angle-calculating master.

On the other hand, the biggest danger with the game (other than permanent blindness) is that it will usually end in a stalemate. There are no rules to prevent a stalemate from happening, either. In Go, for example, there’s a rule that states no move may be repeated 3 times. This game could use a rule like that. I guess the makers were just too impressed with their lasers and mirrors to think about all the possible endgame scenarios.

Which is understandable. Lasers rule.