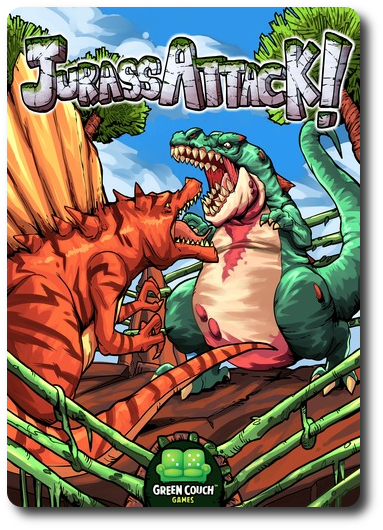 American paleontologist, Jack Horner, said “Children have a great urge to learn about dinosaurs.” Speaking from personal experience, as a one-time child and father of 3 little boys, dinosaurs are the coolest. Even as an adult, I still like learning about them and visiting museums to see the remains of the colossal monsters. In this game, you get to see which dinosaur really is the “biggest and the baddest”.

JurassAttack!, designed by Ryan Cowler and published by Green Couch Games, is comprised of 54 oversized cards. The cards are are thick and as durable as your standard playing card. Artists Shaz Yong has done a wonderful job of capturing the ferocity of the dinosaurs depicted on the cards in a way that is both vibrant with color and highly suggestive of untold might. Which is to say, you don’t want to mess with these dinos.

Second, give each player 1 of the 2 piles and shuffle each. Once shuffled, the player places their pile face-down in front of them. This is the player’s draw deck for the duration of the game. Leave room for a discard and scoring pile on both sides of the draw deck.

Third, each player draws 5 cards to create their starting hand. Players should keep their hand hidden from their opponents.

That’s it for game set up. Time to battle with these long dead legends.

The Bare Bones of Dinosaurs

Each player has the same number and type of cards in their deck. While each card shares the same layout, the information the card displays will be unique to the dinosaur it represents. 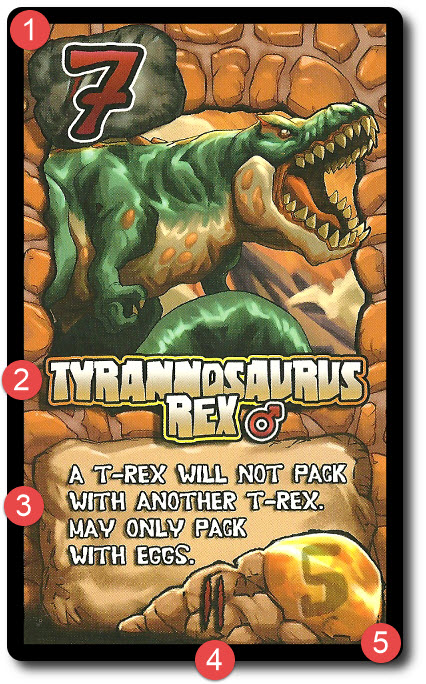 JurassAttack! is played in rounds with no set number of rounds per game. Each game round consists of 3 sequential phases. A single round of game play is summarized here.

At the start of the round, each player reviews their hand of cards and selects 1 or more cards to be played. Selected cards are placed face-down in front of the player. The player who won the previous round places their cards first, allowing the second player an opportunity to determine how many cards they need to play to counter their opponent. While note a significant advantage, knowing more than your opponent can tip the scales in a player’s favor.

During the first round of game play, the player with the Footprint deck will go first. If there is ever a tie, with no player winning, then the player who went first during the previous round before the tie goes first.

A player can place any 1 card from their hand, but if they place more, the cards must be compatible. More than 1 card played during this phase of the round is referred to as a “Pack”. Normally, a Pack must consist of the same dinosaur species. However, there are cards that can be joined with any Pack, regardless of the species.

After both players have completed placing their cards for the round, all face-down cards are revealed. Any effects a card provides are now resolved and the total Ferocity values are calculated. The higher the number, the more ferocious the dinosaur.

If one player had a higher total Ferocity than their opponent, they now take all of their opponent’s played cards this round and place them in their scoring pile, face-up. Then they take all of their played cards for the round and place them face-up in their discard pile. The only exception to this rule are the “Egg” cards that go to the score pile instead of the discard pile. The losing player now draws back up to 5 cards, while the winner must continue with the cards that still remain in their hand. If the winner doesn’t have any cards in their hand, they only get to draw 1 card. 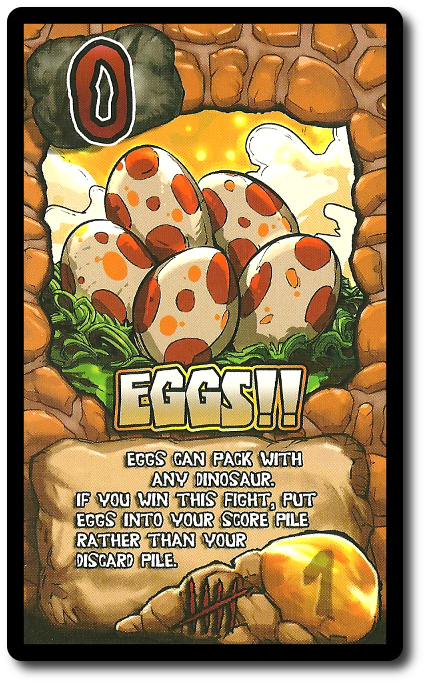 If both players tied for the highest Ferocity, it’s considered a Double Knockout and neither player wins or loses. The cards played are placed in their owner’s discard pile, except for “Egg” cards which are placed in the score pile. Neither player gets to draw any cards unless the player doesn’t have any cards left in their hand. In which case, they can draw 1 card.

This ends the round. A new round now begins starting with Phase 1 noted above.

To learn more about JurassAttack!, visit the game’s web page.

The Child Geeks liked the game’s theme right from the start, which didn’t surprise anyone. The idea of dinosaurs fighting appealed to all the Child Geeks’ imaginations and they were eager to learn how to play the game. Teaching JurassAttack! is fast and easy, but we had to stop several times to ensure the players understood how their choice of cards were leaving them open to attacks later in the game. According to one Child Geek, “You have to bluff in this game, but you can’t forget that you only have so many cards. You don’t want to stretch yourself too thin.” Which is great advise, but holding back too much is also going to hurt your chances of winning. As one Child Geek put it, “You have to risk some to win some, but you’ll lose some, too. Doesn’t matter. The game is fast and you can play another game right away.” An excellent point. Win or lose, JurassAttack! is a fast and ferocious battle that can quickly be restarted when a game is over. When all of the dinosaurs were done beating each other up, the Child Geeks decided that the true winners of the brawl were them and voted to approve JurassAttack! 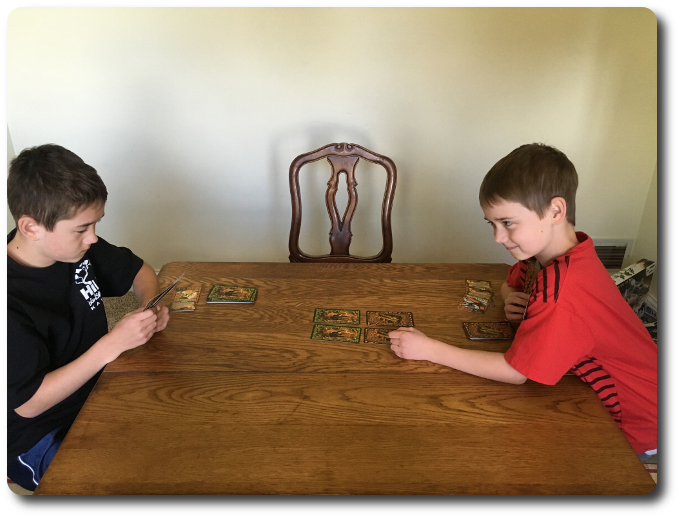 The Parent Geeks didn’t believe they would play the game with their peers, but had a lot of fun playing it with their children. According to one Parent Geek, “It reminds me a lot like War, the simple card game were you compare numbers, but there is more to it than that. You have to pick and chose carefully.” Another Parent Geek said, “This is a great example of a card game that is fun to play with my kids, easy to get to the table, and teaches them – and me – how to manage my cards the best way possible. I’m really enjoying it.” None of the Parent Geeks believed the game would be much fun if it was longer or more complicated, nor did they think it needed more than 2 players. In fact, they found JurassAttack! to be just fine the way it was and voted to approve it.

“What? No…this is War with dinosaurs? Why do you think I’ll want to play that?”, asked one incredulous Gamer Geek. The gaming elitists quickly understood the premise of the game and even quicker decided they wanted nothing to do with it. However, since their job is to play games, they took their table positions and learned how to play. They never liked the game much, but after several plays, had a more optimistic point of view. According to one Gamer Geek, “The game is very simple and lacks much depth, but it also challenges the player more than I thought. I like how you are left short-handed if you play too many cards and the game’s length is dependent on how quickly cards are played. It mixed risk, reward, and bluffing pretty well, too.” High praise from an elitist! Another Gamer Geek said, “The game isn’t bad, it’s just not that great. I’d play it as a filler if there was nothing left to play, but I don’t think the game is meant for adults. As a kids game, I think it would do really well.” When all the games were over, the Gamer Geeks voted to reject JurassAttack!, but welcomed their children to play it with them.

JurassAttack! is a fast game, perfect as a filler or during those moments you want a quick challenge with not a lot of downtime. JurassAttack! plays a lot like War and can be easily taught and played in less time than it takes to bake a pizza. JurassAttack! also takes up very little room, making it a game that can be played often, quickly, and just about anywhere.

While all of this is nice, it doesn’t provide much value to the game for those who take their game playing seriously. While you will never hear me say that JurassAttack! is a “deep game”, I will be the first to state that there is more to it than just random card plays. Players do need to consider which cards to play, how to form Packs, and the benefits to holding cards back. Better yet, there is a real need to lose some rounds so you can hit hard back during the next. JurassAttack! is about winning the war by carefully picking your battles. Losing is oftentimes just as good as winning, and winning could cost you more than what you hope to gain. It’s for this reason I found JurassAttack! surprisingly entertaining and engaging.

Is it like War? Many players thought so and I agree. At least, I agree in principle. They way in which players determine who wins a round is exactly like War, by adding number values on cards and awarding the player with the highest total value the victory. But that is where the similarities end and JurassAttack! begins to stand apart. With both players having an equal number and the same type of cards, they know exactly what their opponent can throw at them. They also know, fairly easily, what cards they have played or have not yet seen. Combining cards to form Packs creates for a larger overall attack, but weakens their next hand. In this way, JurassAttack! is a game that focuses more on balance than mindless card plays. Bluffing becomes an essential element, as does memory.

I think JurassAttack! is best described as a “War variant”, but it’s far removed from the game it emulates to suggest it’s a direct copy. JurassAttack! has teeth and all it takes is one game to quickly learn that players need to be as ferocious as the dinosaurs portrayed on the cards. Fast and furious, with just the right amount of critical thinking to touch on tactics and strategy, this card game will have you bluffing, ducking, and biting at your opponent’s plays. Do play JurassAttack! when time permits. These dinosaurs might be old, but they still pack a mean punch.