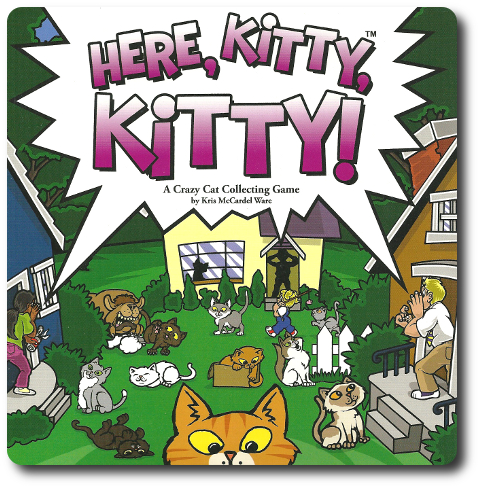 English stand-up comedian, actor, and writer Eddie Izzard said, “Cats have a scam going – you buy the food, they eat the food, they go away; that’s the deal.” Cats certainly do seem to be independent creatures, always thinking for themselves, and never doing anything without a purpose. Regardless if you are a “cat person” or not, this game is all about attempting to persuade felines to see things your way. Much easier said than done.

Here, Kitty, Kitty!, designed by Kris McCardel Ware and published by Fireside Games, is comprised of 6 Property cards, 6 Reference cards, 51 Game cards, and 40 Cat miniatures (in 4 different colors, 10 per color). The Property cards are made of thick cardboard and are very sturdy. The Game and Reference cards are as durable as your standard playing card. The Cat miniatures are made out of thick plastic, are slightly larger than an U.S. Quarter, and have surprisingly detailed features.

The Sun Rises Over Suburbia 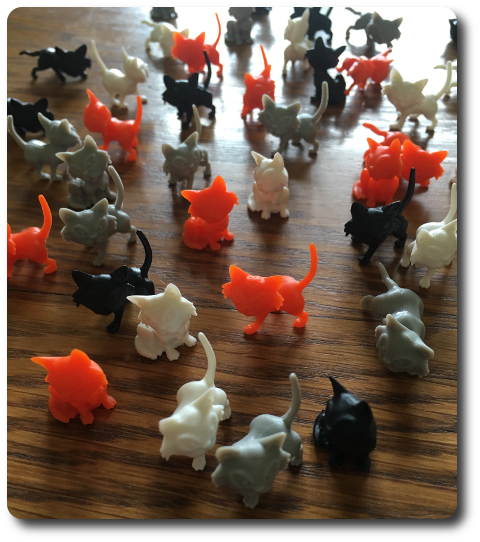 I hope you aren’t allergic…

Third, grab the Game cards and remove all “Instant” Game cards (they have a red border), setting these cards aside for the moment. Shuffle the remaining deck of Game cards and deal 3 cards to each player, face-down. This is the player’s starting hand. They should look at their cards, but keep them hidden until played. Depending on the number of players, more cards will be removed prior to dealing and an additional card will be dealt to each player, as well.

That’s it for game set up. Time to lure in some cats! Which, admittedly, sounds creepy.

Catch a Cat by the Tail

Here, Kitty, Kitty! is played in turns with no set number of turns per game. A player’s turn is summarized here.

The first thing a player must decide on their turn is what actions to take. Most of the time, these actions will be pretty obvious, but not always. This is mostly due to the ever-expanding and shrinking supply of cats in the Neighborhood and how many of the same cats are camped out on the opponent’s Property cards. Each of the following actions can be taken in any order and multiple times, as long as the total number of actions taken is not greater than 2.

Action Option One: Move One Cat 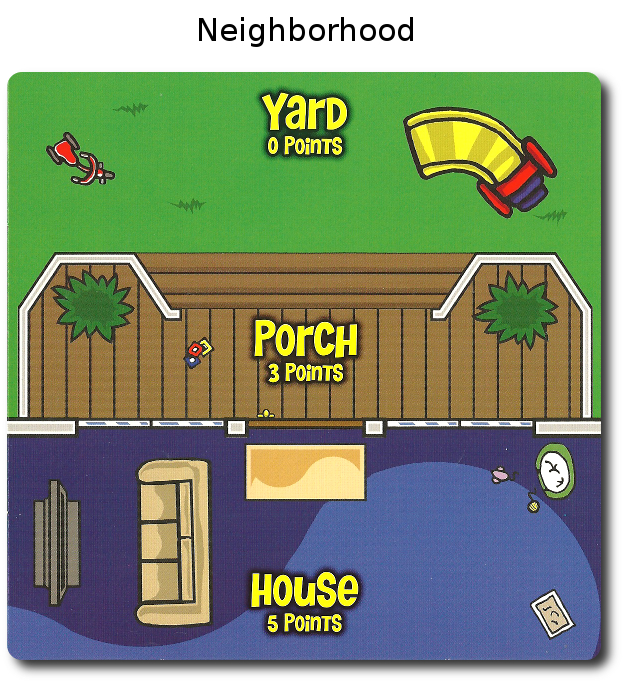 The Game cards allow the player to take special actions that take effect immediately upon the card being played. There are 3 types of cards in the game. Most cards are played, resolved, and then discarded. Some cards remain in play until certain conditions move them to the discard pile. In all cases, the Game card will specify state how it should be used. If a Game card directs a player to remove a Cat miniature, that player can choose which Cat, unless the card specifically states. If a Game card directs a player to take cards from the Neighborhood, but none are currently located there, the player can take Cats from any opponents’ “Yard” Property card space. 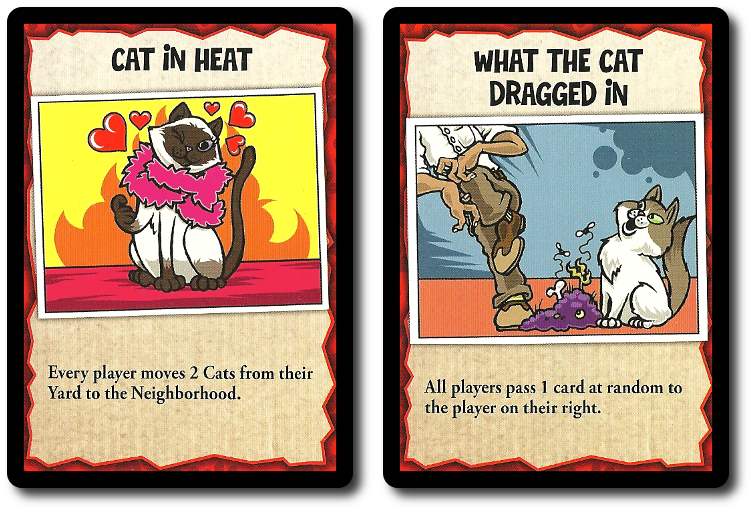 “Standard” Game cards remain in the player’s hand and require the player to take an action to use it. They are primarily designed to benefit the player who is using them and deter the player’s opponents. When they are played is up to the player and there is something to be said about proper timing. Once the card is played, it’s revolved and discarded if need be. 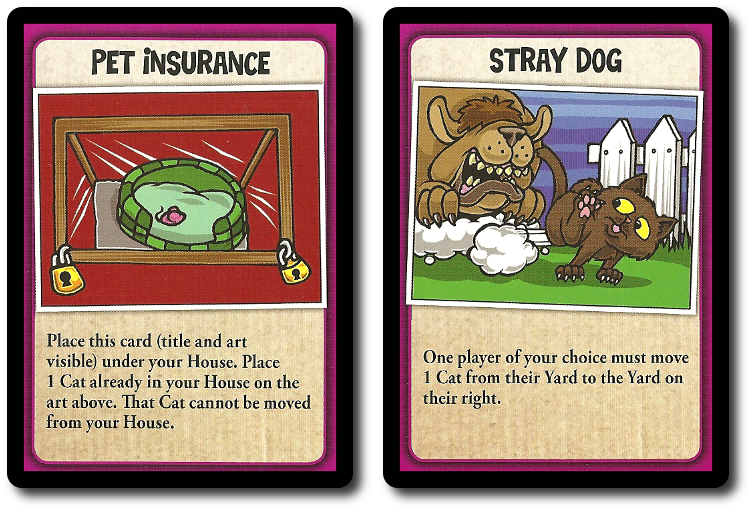 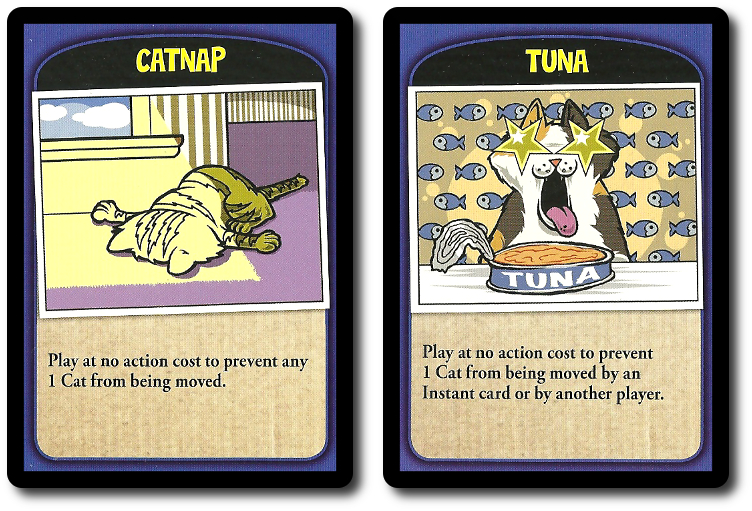 This action allows the player to discard 1, 2, or 3 Game cards from their hand (discarding the card does not trigger effects).

After the player has taken their two actions, they draw back up to the initial hand size limit. Some cards will allow the player to have more than 2 or 3 cards (depending on the number of players in the game). If the player has more cards in their hand than the hand size limit, they do not draw any cards during this step, but nor do they have to discard any cards. If an “Instant” Game card is drawn, it’s immediately resolved and then the player draws a new card.

The game continues as described above until the last card is drawn from the Game draw deck. This triggers the endgame and 1 more round is played, with each player (including the player who triggered the endgame) taking one more turn. After all the players have completed their final turn, scoring begins.

Cats on the player’s “Yard” Property card space and in the Neighborhood award zero points.

The game’s rule book has a handy scoring sheet on the back that the publishing company suggests players copy (or download a copy here). I recommend it, as well, as scoring can become tedious without it. Especially when moving Cats around to make groupings.

What drew the Child Geeks to the game originally quickly became a focus of resentment and of obsession. I speak of the Cat miniatures. The Child Geeks picked them up, started stacking them, sorting them, and even a few started to name them. When the game was played, these same little cats became objects to be fought over, stolen, and in one case, thrown across the room. According to one Child Geek, “This game is all about collecting the right number and right type of cats and the other players know it, too. It stinks when they steal your cats.” But not when players steal opponents’ cats! Another Child Geek said, “I like the game. It makes you think ahead, come up with different plans, and look for new opportunities. I still like dogs more than cats, though.” The game did little to change a player’s mind about the pros and cons of cats, but all the Child Geeks agreed that Here, Kitty, Kitty! was a game they enjoyed. 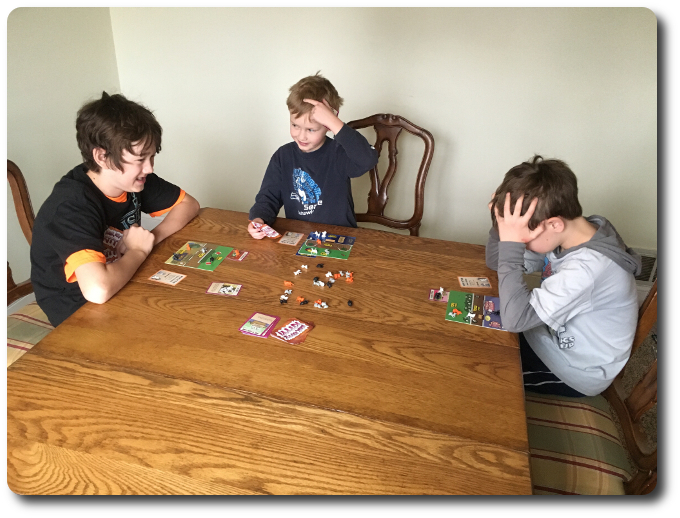 Child Geeks as young as 6 can play the game, but will need help with the cards

The Parent Geeks found the game to be an interesting exercise in timing and subtle manipulation. According to one Parent Geek, “You cannot hide anything in the game; everything is right out in the open. This makes it easy for others to view what you are doing. You have to be sneaky about what your goal is and how you go about it.” Some of the Parent Geeks found the cards to be too disruptive at times, but appreciated the fact that none of the cards had an impact heavy enough to make or break the game. As one Parent Geek put it, “The cards are there to shake things up and open up new paths. I like that, but only when things go in my favor.” When the games were over and all the kitties were accounted for, the Parent Geeks voted to approve Here, Kitty, Kitty!

The Gamer Geeks found the components to be excellent and liked how the goal of the game was both to collect as many cats as possible, but also certain types. According to one Gamer Geek, “Just collecting as many resources as possible is not much of a game. The goal is obvious, as is any strategy or tactics. This game has players collect numbers and types, adding just enough complexity to make choices anything but straightforward.” But of genuine complexity, the Gamer Geeks found none. As on Gamer Geek put it, “This is a great game for families and for younger or less experienced players. For individuals who have played lots of games, I think they’ll find this game disappointing.” Disappointing, but not boring. All the Gamer Geeks agreed that the game was well designed and had enough depth to be worthwhile, but not for the gaming elitists. The Gamer Geek rejected Here, Kitty, Kitty!, but would have no problem playing it with family and friends.

There is enough to this game to keep it on your game shelf for a long time. As players grow up and become more experienced, the game opens itself up just a bit more to keep the average player interested. The keyword here is “interested”, not necessarily “challenged”. Here, Kitty, Kitty! moves at a quick pace with lots of bits shifting about. There is enough mental stimulation to keep a player engaged, but not enough to outright demand a great deal of mental energy. Which is not to suggest that the game won’t test a player’s patience. Lots of things can happen to cats as the game progresses, and no cat is safe from being snatched until safely tucked away in the player’s “Home”. Which takes time and, in some cases, luck.

Not luck in the general sense. Luck, as in, “lucky that the player’s opponent’s aren’t paying attention.” Every player has the same goal and every player knows how many points their opponents have. This keeps everyone scanning the table and attempting to determine what level of threat each opponent is. This works out really well for the younger and less experienced players who play with more experienced players. More experienced players, to their misfortune, tend to ignore opponents who seem slower or less aggressive. This gives opponents a lot of room to maneuver and to breathe. “Acting dumb” in this game is actually a pretty good strategy.

Overall, I enjoyed the game and continue to enjoy it. I don’t care much for the cards, as they tend to be fairly random, but the set collecting aspect can be a real challenge. Players can earn a lot of points if they can pull it off, which is part of the fun. Knowing that there are big rewards makes everyone push their luck and try in vain to stay underneath their opponents’ radar. If you enjoy games where the challenge is one part timing and one part tricking others, than do try Here, Kitty, Kitty! Even dog lovers will find something to wag their tail about.