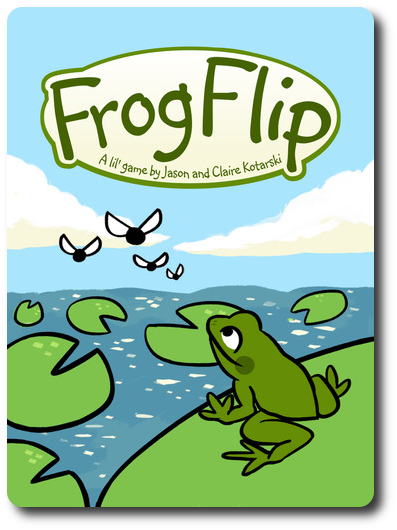 The quiet waters of the forest pond reflect the near perfect blue sky above. Ducks gracefully glide upon the pond’s surface and the sound of buzzing insects can be heard between the willows. Suddenly, the serenity of the scene is shattered as a big frog screams “CANNONBALL!” and jumps into the pond! SPLASH! Ducks and bugs scatter. All that remains is the frog who quietly paddles back to shore, laughing.

FrogFlip, a self-published game by Claire and Jason Kotarski, is comprised of 4 Lily Pad cards, 8 Bug score cards, and 1 Frog disc. And that’s it. The game is so small, it can fit easily in your back pocket or wallet, but the quality of the game is solid. The cards are made of thick card stock and the Frog disc is solid plastic. 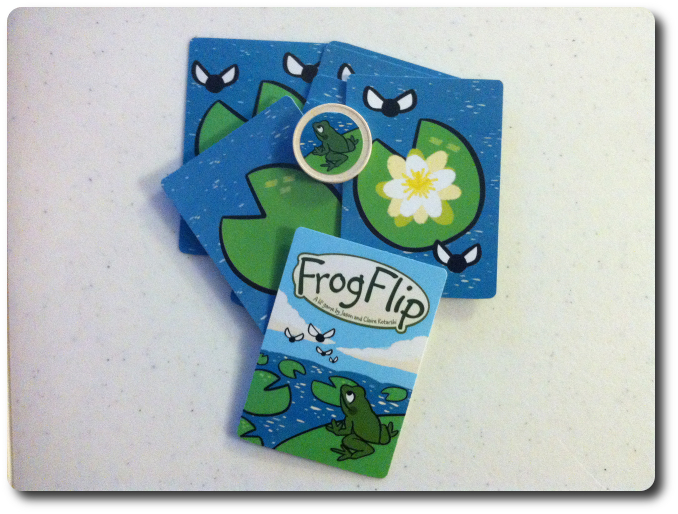 Second, shuffle the 8 Bug score cards and place them lily pad flower side down. This is the Bug deck and it should be placed within easy reach of both players.

That’s it for game set up. Determine who will go first and hand them the Frog disc. Both players should also agree on what the victory condition for the game will be (see “Winning the Game” below).

Time to get hopping!

The game is played in turns. On a player’s turn, they will complete the following sequential steps:

The player now takes the Frog disc and “flips” it like they would a coin. The correct technique requires the player to balance the Frog disc on their pointer finger with the thumb directly below it. When flipping the Frog disc, no part of the player’s hand can be touching the playing area and they cannot ever pass the edge of the first Lily Pad card closest to them. They can, however, thrust their arm to obtain momentum or height.

The player’s turn is now over (unless they get 2). The Frog disc is handed to their opponent who repeats the steps above.

The game can end one of two ways, with both players deciding which of the following two will indicate the end of game condition prior to playing.

The standard game is for 2 players only, but the game comes with a 4-player variant. In order to play with 4 players, however, two copies of the game must be available. Game set up is slightly different with the Lily Pad cards set in a “+” formation with each player taking one of the four points. Game play itself is the same as the standard game, with the game ending when either the last Bug card is claimed or a player collects a total of 9 or more points from the Bug cards they have collected during the game (determined before the game is played).

To learn more about FrogFlip, visit the game’s web page on the Game Crafter.

FrogFlip is a very simple game, but it requires skill to play well. I love games like this because the player can always practice to get better and game playing sessions usually result in lots of funny stories to tell later. Dexterity games with moving parts feel more visceral than the standard board and card games, with only dice games coming close to the same feeling dexterity games provide. But not all dexterity games are good ones. Angry Birds, for example, is not what I would consider a “good game”, but it still entertains. How odd that a game that is mindless can still engage the brain, eh?

Based on what I’ve seen so far and played with the Child and Parent Geeks, I think FrogFlip will be well received. I don’t know how big of an endorsement the Parent Geeks will give the game, however, seeing that it’s only a 2-player game and not playable by a family sized group. For the Gamer Geeks, I think it’s going to depend on how they approach it. If they look at FrogFlip as a game that had them in mind, they are going to reject it. If they look at FrogFlip as I think it should be seen, which is to say a very simple dexterity game, then they might just approve it.

Teaching the game is literally done with a toss of a disc. “Do this and score points” is all I told our players and that’s all it took. No questions. No concerns. No problems. All our players were up and flipping 1 minute after I explained the game to them. But before I let my two oldest little geeks play the game, I asked them their thoughts on FrogFlip so far.

“This is just like our other action games. I will destroy my brother!” ~ Nyhus (age 5)

Looks like both of my little geeks are enthusiastic to play. Let’s see if the game is a flippin’ good time or is all wet.

The Child Geeks loved FrogFlip. But their love was strained with a bit of rage. The Frog disc cares nothing of friendship or loyalty and goes where it will. Most of the time, it landed where the Child Geeks meant it to or very close. But other times the crazy frog would go flying off in a direction that no one could have predicted. One Parent Geek, who was quietly watching the game, almost got hit in the eye! The Child Geeks loved that, but they hated the frog when it went anywhere but where it was intended to land. I’m pretty sure I heard my 8-year-old swear under his breath, which is a major “No-No”, but I was laughing too hard to hear him clearly. When the frog was done rolling around the table, all the Child Geeks agreed the game deserved their approval. Mixed feelings remained about the frog, however. 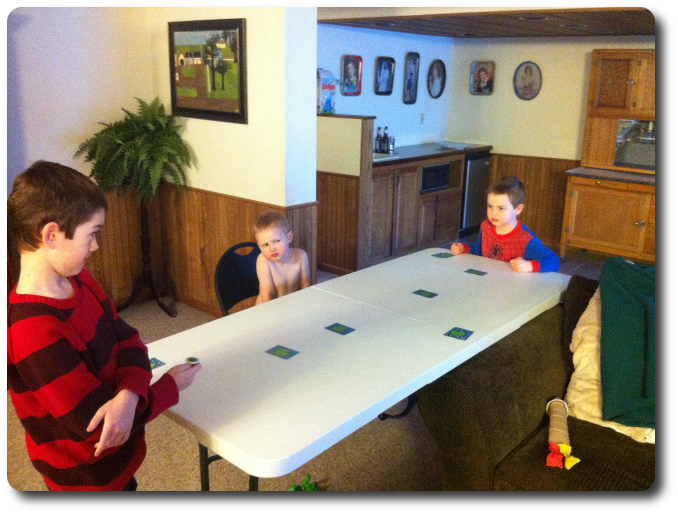 The Parent Geeks also enjoyed FrogFlip and thought it was an excellent 2-player game. When they asked me if it was possible to play with more than 2 players, I told them it was when more than one game was purchased. They had mixed feelings about that. One Parent Geeks said, “what a scam!” Another Parent Geek said, “blatant money grab”. Then I told them how much the game was if they wanted a copy, and several of the Parent Geeks said they would buy 3 so they could play up to 6 players. Parents… Regardless, they all really enjoyed FrogFlip with just 2 players. They found the game to be easy fun that wasn’t mindless motion. They cheerfully approved it.

Gamer Geeks? Well, that was highly dependent on how the individual Gamer Geek viewed the game, as predicted. Of the four I played the game with, it was surprisingly split right down the middle. The two who didn’t think FrogFlip was much of a game said it was “too easy, too shallow, and way too pointless.” The two who enjoyed it responded by saying, “you’re nuts – this is a fast and fun game that we could play anywhere at anytime.” The debate continued for a bit while I sat back and watched them trade verbal blows and mocking insults. When the proverbial dust settled down, both groups agreed to disagree (privately telling me later that they thought the other group was full of it). This resulted in a “mixed” endorsement. The only point the Gamer Geeks agreed upon was that FrogFlip could be used for drinking games. Not sure that was the game designers’ goal…

I won’t lie to you. FrogFlip is dead simple in both its design and game play. Take the Frog disc, flip it, score or don’t. And that’s it. No strategy. No tactics  Lots of luck. And yet, the game is fun. Fun and frustrating. You need a good eye to judge distance, good technique to flip the disc, and lots of cosmic Karma to make the Frog disc land where you want it to 100% of the time. Which it seldom does. But who cares? It’s a fast game, it’s a fun game, and you can play it anywhere you have a flat surface and a crowd that doesn’t judge you for swearing loudly when the frog goes rolling off the table.

Every game, be it with adults, kids, or both, was filled with high levels of frustration and exuberance after every flip. Good times, good times. Which, when you stop and think about it, is exactly what a game is supposed to provide. So, you know, score one for the frog and the game designers.

And yes, this game would be excellent in a pub. Not that I condone drinking of alcohol while flipping defenseless frogs, mind you.