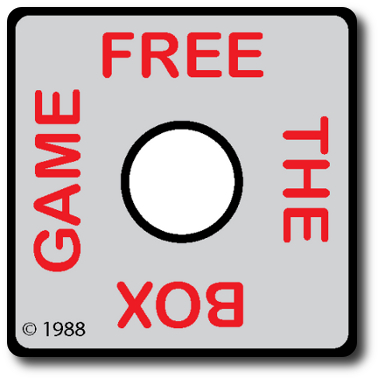 In this game, you need to stay one step ahead of your opponent’s at all times. Oddly enough, that means being behind them. This is a game about capturing and outrunning, but be careful how far you go. It’s not enough to not be captured, as victory only goes to the player who captures their opponents or can move the most deftly around the neighborhood. Hide if you must, but know that victory is only possible if you keep moving, ducking, and dodging. 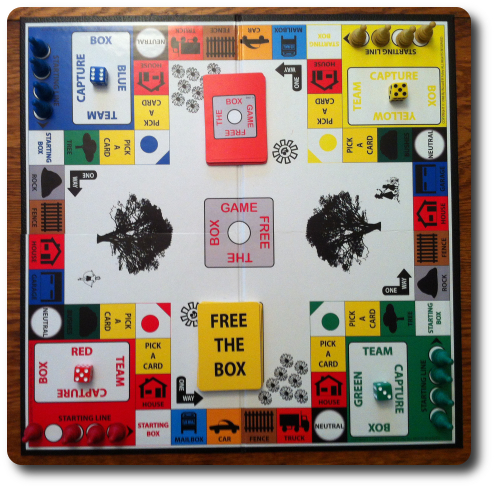 To set up the game, first place the game board in the middle of the playing area. The players should be seated in such a way that no portion of the game board is out of their reach.

Third, shuffle the yellow cards and place them, face-down, on the yellow spot designated for the cards on the game board.

Fourth, each player should now roll their die. The highest roll will be the first player.

That’s it for game set up. Let’s play!

Free the Box is an abstract board game version of the classic children’s game, Hide-And-Seek. The game board represents the neighborhood the game is taking place in with each player’s Player pawns representing one person on their team. The game is played in turns with no specified number of rounds. A typical player’s turn is summarized here.

After the player has moved one of their Player pawns, they now resolve the space they landed on. The following conditions can occur depending on the space the Player pawn ends its movement:

If a player ever has all four of their Player pawns captured, they are out of the game and will not be able participate for the duration.

This ends the player’s turn. The next player in turn order sequence now goes starting with step 1 above.

The game continues until one of two possible conditions are met.

The “normal” game is noted above. As the name suggests, the “longer” game rules extend a game’s play session. For the most part, game play and set up is the same with the following noted differences:

To learn more about Free the Box and read the full rules, visit the game’s web site or visit the Game Crafter.

Free the Box is very close to Trouble or Sorry! (which is the updated version of Parcheesi, which is in turn based off of Pachisi – a very old game dating back as far as 4 AD). Trouble and Sorry! are games my little geeks, family, and friends are all very familiar with, but few enjoy. As such, teaching Free the Box isn’t going to be any problem whatsoever, but getting them to give the game a try will be. This is unfortunate as we strive to play each game without preconceived notions regarding the game play. Near impossible, I know, but one must set goals.

I predict Free the Box will be well received by the younger Child Geeks and will slowly lose favor the older the players get, be they gamers or non-gamers. Free the Box has little in the way of strategy or tactics, is highly dependent on luck, is a roll-n-move affair, and can technically last a long, long time. There is little here to appeal to the Parent Geeks and non-gamers other than it’s a game that can be played easily with children. If I can get a Gamer Geek to sit down with me to even try Free the Box, I’ll count myself lucky.

When I put the game in front of my two oldest little geeks, all I said was, “this game is like Trouble and Sorry!, and a little like Marbles.” They immediately knew what the game was about, how it was to be played, and what they should expect from the game play. Marbles is a game just like Trouble, but with slightly different rules that has been played by my wife’s side of the family for generations. My little geeks had no questions and just wanted to dive into the game. As my oldest set up the game board, I asked them both their thoughts on Free the Box so far.

“Looks like an easy game and one I am already familiar with.” ~ Liam (age 8)

Looks like my 5-year-old is eager to play, but I’m not seeing the same level of excitement from my 8-year-old. Let’s play Free the Box and see if the game provides a bit of fun or it remains hidden despite our best efforts.

The Child Geeks had mixed views on the game. For the younger Child Geeks, Free the Box did great! The level of difficulty is exceedingly low and the choices a player needs to make all boil down to what Player pawn to move. Most of the time, that’s a really easy answer as the Player pawn positions to others and to specific spaces on the game board make the choice obvious. There were a few times during the games that we observed where the choices were not as simple, but hardly difficult. Really, all a player needs to do is keep moving around the game board, never cluster their Player pawns, and pounce on their opponent’s as often as possible. For the younger Child Geeks, this was a great deal of fun (even when they got captured), but for our older Child Geeks, they became bored with it. According to my oldest little geek, “it’s just the same thing over and over again – I don’t have to think much about what I’m doing. That gets boring, Dad.” You bet it does, but for the younger Child Geeks, it was perfect. Because we could not get a definitive approval endorsement, we are listing it as “mixed” for the Child Geek group.

It should be noted that the game does have cards that require the player to read. Players need not know how to read, however, to play the game if an opponent can read the cards for them. This means Child Geeks who cannot yet read, but can count up to 6, can play this game with minimal assistance. Or, help them with their Player pawn movement and you could play this game with Child Geek’s as young as 3 (I doubt a 2-year-old would have the patience to sit still for the game). 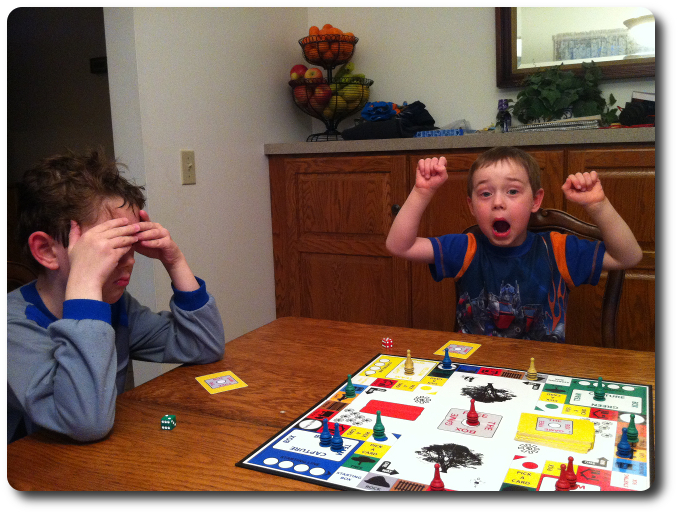 The Parent Geeks tolerated this game, at best. For an adult who enjoys casual board games, Free the Box is going to amuse, but not for long. As my 8-year-old pointed out, the game is a series of repetitive actions with little thought put into it. The Parent Geeks started to look at their watches, became more vocal with their game play suggestions, and were clearly showing signs of fatigue and disinterest after 20 minutes of playing the game. Perhaps the most hilarious and telling quote from a Parent Geek was when one of them suggested to their son, “Take this pawn, move it to capture me, and end the game, please.” Even the non-gamers didn’t last that long with the game, but all Parent and non-gamers agreed that the game was a good one for the younger crowd. “This is a simple roll the dice and move your piece kind of game. Those are great for children, but not much fun for adults.” Very true. The Parent Geeks were unable to determine if they should approve the game for families or reject it because it bored them. In the end, they decided to simply state “both”, which results in a mixed endorsement.

The Gamer Geeks wanted nothing to do with Free the Box. After I explained it, they asked me, “So, this is a roll-and-move game with no thinking needed whatsoever?” I told them no, it wasn’t, because you might have up to 4 Player pawns to consider. At which point, most of the Gamer Geeks rolled their eyes at me and excused themselves from playing the game. Perfectly reasonable when we consider that Free the Box was never intended for the elitist gamer, but I am disappointed I couldn’t get them to at least try it. I said as much. In response, one Gamer Geek said, “There is no need for me to try this game because I have already played it. I’ve played countless hours of Trouble and Sorry! I don’t see this game providing anything new.” A fair observation. If you don’t like Sorry! or Trouble, there is no chance you’ll enjoy Free the Box. Ever.

Note that we did not play the “longer” game variant as the “normal” game was found to be long enough by all our players.

I see Free the Box as a family board game for the non-board game playing family. This might sound very negative, especially considering that most people playing board games are doing so because they enjoy the hobby, but this is not necessarily the case for everyone. Between the individuals who do not want to play board games and individuals who only want to play casual board game sporadically is this strange target market that doesn’t play games, but is not necessarily opposed to them either. I believe this is the best target market for Free the Box – families who don’t play board games often, but don’t mind playing them once in a while. And you know what? That’s perfectly reasonable and a good place to be in. Families like these will not buy board games normally because of the lack of interest. Free the Box takes only 30 seconds to set up and can be taught in the next 30 seconds. One minute later, everyone is playing a board game. Perfect for some and much less so for others.