Please Take Note: This is a review of a game currently in progress of being designed. It was provided to us early so we might assist the game designer with thoughts from our players. The game is not yet released and is still very much being “worked on.” We were paid for our time, but not our words. Now that we have all that disclaimer junk out of the way, on with the review. 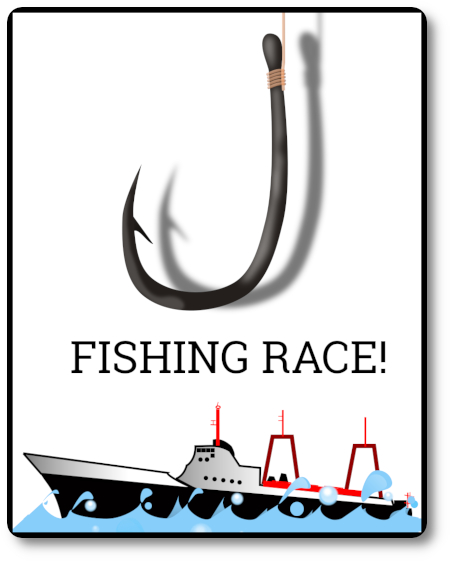 The fishing industry is highly competitive and dangerous. It’s also highly lucrative. The risks are often outweighed by the wealth one can obtain by having a single successful season. But like all resources, there are limits to availability. In this game, all the players will be simultaneously attempting to catch as many fish as possible. Time is limited, and so is the supply of fish!

Fishing Race, designed by Carlos Guzman, will reportedly be comprised of one large game board, six magnetic fishing rods, 36 small fish miniatures, one push button, and one sand timer. Unfortunately, as this is a review of a pre-published game, I cannot comment on the quality of the game components.

Getting Ready to Fish

First, place the game board in the middle of the playing area. We tried the game on both the ground and on the table, attempting to determine the best way to play this game with Child Geeks. While placing it on the floor sounds like the “right thing to do,” it wasn’t. The game is best played at the table.

Third, give each player a fishing rod of their color choice.

Fourth, place the sand time off to one side and give the push button to one player.

That’s it for game set up! Let’s go fishing!

Fishing Race is a game where all participants play simultaneously. A single game lasts about 15 minutes, which is the time it takes – roughly – for the sand timer to end. The game is broken into rounds with no set number of rounds per game. A game round is summarized here.

As soon as all players decide to start, tip the sand time over. THE GAME HAS BEGUN! 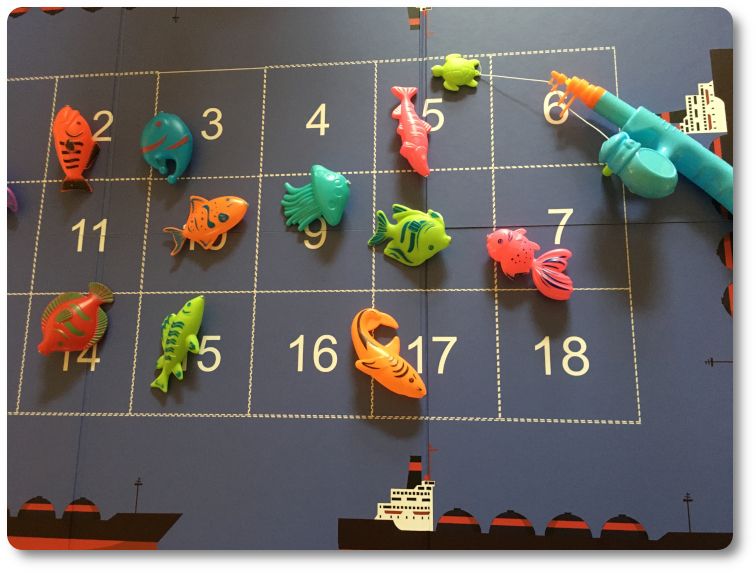 Step One: Press the Button

The player who currently has the push button pushes it now. One of two things will happen as a result.

A voice will tell the players to start fishing, and a catchy little song will play. All players should now begin fishing as fast as they can! This is done by taking the fishing rod and dipping the lure down, touching the fish in the ocean. At the end of each lure is a magnet that will attract and attach to a fish. If a fish sticks, the player takes the fish, places it next to them on the “boat” space on the game board. They then go fishing again.

Optionally, and depending on how old your youngest Child Geeks are, you can have the player who pushed the button be the only individual fishing. This will give each player approximately 30 seconds to fish alone while others watch. Not as exciting, but it will do wonders for parents’ nerves if the kids start fighting, crying, or both. Probably both…

This is repeated as many times as possible while the music is playing. Once the music stops, all players should stop fishing, too.

A voice tells the player no fishing during this round (insert sad trumpet sound here).

After the music stops (the song lasts for about 30 seconds) or the round ends abruptly with no one fishing, the push button is passed to the next player in turn order sequence.

The game now continues, as noted above, until the sand timer runs out.

The game ends once the sand timer runs out (or there are no more fish to catch). After that, finish the round as usual. All players should now count the fish they captured. The player with the most fish wins the game!

To learn more about the game, contact the game designer directly using their email address: soar.imagination@gmail.com

The Child Geeks enjoyed the game but also found it frustrating. The short fishing time made the game feel like musical chairs, causing all the Child Geeks to fish like crazy, laughing, and jumping around. However, the frustration quickly set in when it became clear that catching the various aquatic life with small magnets was not an easy task. Fishing pole lines got tangled, magnets wouldn’t connect, and so on. The Child Geeks quickly learned that the best way to fish was to secure the bait to their fishing pole by making the fishing line tight. Then all they had to do was dip their pole. Easier and provided much more control. According to one Child Geek, “I like that you have to listen to the instructions and the music. It makes me want to fish!” Another Child Geek said, “The game is fast, and I love to play and look at the fish, too.” When the last boat returned to dock, the Child Geeks all agreed that Fishing Race was a fun catch.

The Parent Geeks were less enthusiastic about the game but were pleased that their Child Geeks enjoyed it. According to one Parent Geek, “A very frustrating and repetitive game. The kids liked it; I did not.” Another Parent Geek said, “An OK game. I had a fishing game as a kid, but the magnets were bigger, and the fishing was easier. It was motorized, too. This game feels like a version of that but has additional parts and is much more hands-on. I didn’t much care for it.” It became clear that the Parent Geeks were not the target audience for the game, but they enjoyed watching their children play the game. Most of all, they appreciated that the game kept their little ones engaged and happy. The result was a game that the Parent Geeks couldn’t decide if they wanted to keep or release.

The Gamer Geeks found all kinds of problems with the game. According to one Gamer Geek, “Ugh, no. The sand timer is not a great way to keep track of time in a game that demands attention and energy from its players, the button to randomize fishing is interesting but annoying, and the fishing poles with their tiny magnets have a challenging time connecting to the tiny magnets of the fish. I know this is a prototype, but sheesh, not great.” Another Gamer Geek said, “Clearly not a game for anyone over the age of 10-years-old. I’d put this in the same category as children games that you buy, play, and then garage sale within the same year.” After having tried the game a few times, the Gamer Geeks decided that this game was not worth fishing for.

Fishing Race is one part musical chairs (as one of our reviewers stated) and one part dexterity game. Unfortunately, the rules to the game are exceedingly light and do not mention anything regarding the proper use of the fishing poles. They function as designed, but the small magnets make the process of actually catching the fish more difficult than I think it should be. In addition, the idea is that players, once they catch their fish, put them on the boats located on the side of the game board. Not a great location, as these caught fish kept accidentally getting pushed back into the ocean and, consequently, caused a few of our younger anglers to get rather upset. More works need to be put into the game components.

Let’s talk about the push button for a moment. A neat idea that allows any player at any age to randomize the game’s next 30 seconds without risk of chucking dice across the room or hurting their finger with a spinner (I’ve seen it happen). The music it plays is perfect for children and like nails on a blackboard for adults. Expect to hear it often. Hilariously, the current version of the recording includes a woman’s voice that sounds like the lady is bored to tears. You only have to hear her voice a few times to sympathize with her plight. It’s repetitive and perfect for the kids.

The saving grace for the game – and adult player’s sanity – is the sand timer. Each game is approximately 15 minutes long, which feels like an eternity for an adult who has heard the energetic music of the push button more than five times. The game will end either with the last fish being caught or when the time runs out. I found it hilarious that all the Parent Geeks who played the game were just as engaged as the Child Geeks at first, but about mid-game, were paying much more attention to the sand timer. Almost as if they were willing for the tiny grains of sand to speed up suddenly.

Overall, the game has promise, but I would not want to play with my children often. It’s entertaining, to a point, and limited in replayability. The game’s level of frustration is higher than it should be considering the target audience and is repetitive to a point where anyone over the age of 10 might avoid the game altogether. I will say, however, that the copy we were provided was a big hit with my youngest, but for the wrong reasons. They found more joy and interest in playing with the game components and ignored the game. They named the fish, made families, and used the fishing rods to “move” the fish, not “catch” them. Hilarious.

This is a paid-for review of the game’s prototype. Although our time and focus were financially compensated, our words are our own. We’d need at least 10 million dollars before we started saying what other people wanted. Such is the statuesque and legendary integrity of Father Geek, which cannot be bought except by those who own their private islands and small countries.