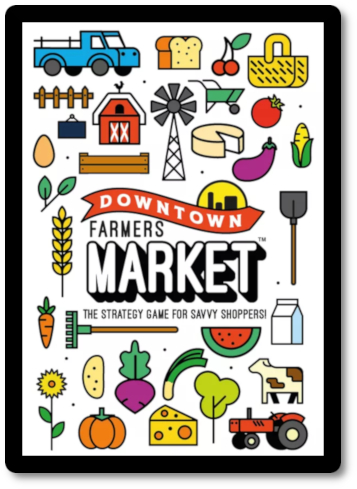 I love visiting farmers markets. They are full of fresh vegetables, beautiful flowers, artisan loaves of bread, and, if you’re fortunate, a vendor selling bacon on a stick smothered in chocolate. Farmers markets feel like an adventure each time I go, not having any idea what I’ll find but always leaving feeling satisfied with the experience. In this game, you’ll also have a chance to visit the farmers market, with a list of food ingredients you want to gather quickly. But like real-life farmers markets, availability and quantity is never a sure thing.

Downtown Farmers Market, designed by Johan Benvenuto, Alexandre Droit, and published by Blue Orange Games, is comprised of one First Player token, 65 Food tiles, and 44 Challenge tiles. The token and tiles are made of thick cardboard and are very durable.

Getting Ready to Go to the Market

Let’s pause a moment and evaluate these challenges. Players must know what each of the possible seven different types of challenges represents, as each is a condition that must be met to score the row or column. If the player doesn’t meet the requirements, they score zero points. Each deserves a brief explanation of what they are meant to represent. 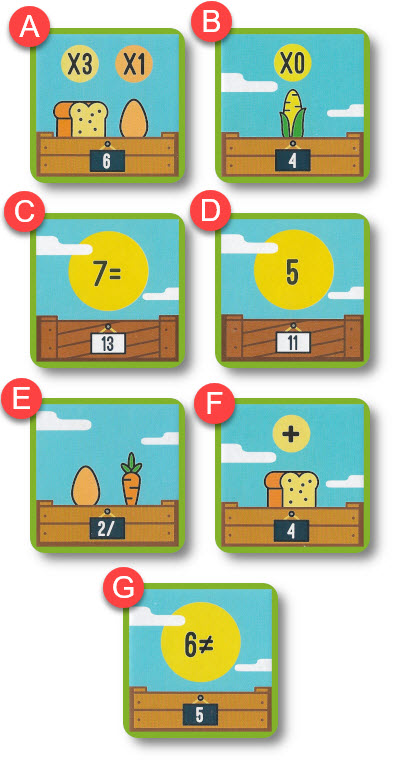 C) This challenge requires the player to pick any food ingredients they like and have them precisely the number of times shown on the Challenge tile in the row or column. In this example, the player could have bread, cheese, eggs, milk, carrots, or corn seven times but no more. Any other ingredients in the row or column are ignored for this challenge.

G) This challenge awards the player points if each of the six ingredients (bread, milk, egg, carrot, corn, and cheese) are available in the row or column at least once. Having more than one will not penalize the player. 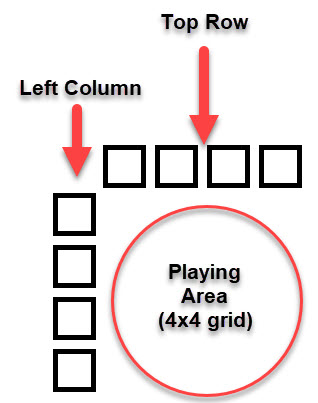 That’s it for setting up the game. Decide who will go first, give them the First Player token, and begin!

A Day at the Farmers Market

Downtown Farmers Market is played in 16 rounds. A single round is summarized here.

The number of Food tiles the player selects is dependent on the number of players in the game.

The remaining Food tile will stay put for now and be available during the next round.

Each player now places their selected Food tile to their grid.

Food tiles represent one or more goods and ingredients purchased at the Farmers Market. The goal here is to match the items on the Food tile to the Challenge tiles that represent the borders of the rows and columns that form the grid. 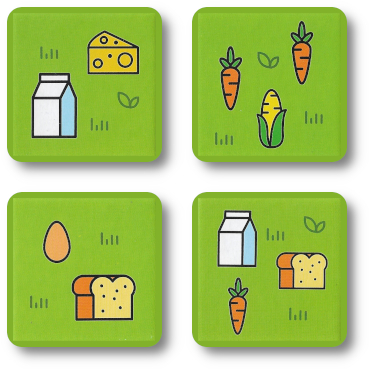 The only rule to placing the Food tile is that it must be placed in a vacant position on the 4×4 grid, not extending outside the bounds set by the Challenge tile rows and columns. Once the Food tile is placed, it cannot be moved for the game’s duration.

Step Three: Pass the Token and Restock the Market

The last player to select a Food tile is given the First Player token. Then four Food tiles are drawn and placed in a row next to the Food tile that was not selected during the round.

This completes the round. As noted above, the next round begins with the new First Player taking their turn.

A Successful Visit Comes to An End

The game ends on the 16th round, filling the players’ grid.

Each player now scores their collection of Food tiles. This is done by looking at each Challenge tile and examining what it needs in the row or column it represents. If the Challenge tile is correctly fulfilled, it remains. If not, remove it from the grid. This makes it easy to score points.

After each player has completed reviewing their grid, add the points up from the Challenge tiles that remain. The sum is the player’s score. The player with the highest score wins the game!

Your youngest little geeks might perceive the base game as too complicated. A game variant is described in the rules that remove the Challenge tiles from play. The player’s goal is to create a 4×4 grid using the Food tiles with points scored for each row and column based on the total number of the majority of ingredients. For example, if the first row had three pieces of cheese, two cartons of milk, and one carrot, the player would score 3 points for the cheese.

The Child Geeks very much enjoyed this game after becoming more familiar with the Challenge tiles but almost always preferred not using them. The Challenge tiles, while potentially positioning the player for big points, can also just as quickly rob the player of points. This did not sit well with the youngest of Child Geeks and those who preferred more control of the outcome of their decisions that included flexibility to adjust according to tile availability. According to one Child Geek, “I liked the game. It was fun putting each tile in a place that would score many points.” Another Child Geek said, “It’s a puzzle game that can be played without the challenge or with it, but it is still a game you have to think about. I liked that I could play without the challenges and still compete against the other players.” When the Farmers Market was closed for the day, the Child Geeks awarded the game two thumbs up.

The Parent Geeks also found the game to be a delight, with casual gameplay, quick turns, and interesting choices from the start to the end. According to one Parent Geek, “The game seems very approachable and almost tricks you into thinking it will be an easy jaunt to the market. Nothing could be more wrong, however. Each tile was an opportunity to work towards big points or lose them all. Each tile selection was important, as was its placement. I loved it.” Another Parent Geek said, “A great game that allows players of all ages and experience levels to enjoy it at the table—looking for a more challenging game? Great! Use the Challenge tiles. Were you looking for something more casual? No problem; chuck those Challenges. The result is still a game, played either way, that pleased us all.” So pleasing that all the Parent Geeks voted to approve Downtown Farmers Market.

I had no idea what to expect from the Gamer Geeks when I first approached them with this game. On the one hand, the game is straightforward. Draw a tile and place a tile, which is pretty uninteresting. On the other hand, I was theorizing the Challenge tiles would hook the gaming elitists simply because they created obstacles that require genuine consideration to overcome. It turns out I was right, which isn’t very often, so you know I rode that show pony as far as I could before it dropped dead from exhaustion. According to one Gamer Geek, “I was surprised. The first game was frustrating because I didn’t get what the Challenge tiles told me. Make sure you tell your readers to understand those tiles! Then I played the kiddy version, which was still a challenge but less thinking. Finally, I went back to the Challenge tiles and found I enjoyed the game. A real winner for casual game nights or a quick filler.” Another Gamer Geek said, “I wouldn’t consider this a gamer’s game, but it proved to be a game that made me think, frown, cheer, swear, snarl, and yell for joy. Good game.” When the last stall at the market shuttered its counter, the Gamer Geeks agreed that Downtown Farmers Market was well worth the visit.

Now here is a game that, at first glance, looks to be as about as complicated as rolling a sock. The game has few components, very straightforward rules, and almost dares you to think it’s a game not worth your time.

Then you play it.

I’m telling you, folks, never have I been so pissed at my opponents for taking the one freaking tile I needed to score points. HONESTLY! Don’t they see that all I needed was two more loaves of bread? They were rude to snatch it up right before my turn when it was so obvious I needed it for my row. Bastards…But oh my! WHat’s this? A new round of possibilities? And I get to go first? Yes, thank you, I will take that corn and egg that works very well with this challenge over here.

This is a  game of wants and needs that you are constantly being asked to evaluate. Those Challenge tiles are – indeed – challenging. You have plenty of opportunities to get what you need to work towards your challenge requirements, but as the game continues, you have less and less room to shift your focus. Some tiles you get early on will suddenly be real problems for working around mid-game. And that Challenge tile you picked at the start of the game that had lots of points; good luck trying to make that score for you.

My point is, this game, as innocent as it first appears, is anything but. It’s weirdly cutthroat with the right crowd or a pleasant mind teazer with a casual group. The game does challenge you, reward you, and yes, it will play with your emotions if you let it. That said, it’s also a great family game. Use the game variant, and your littlest Child Geeks or friend who “just doesn’t get games” will have no problem competing with you at the same table. Challenge tiles introduce the possibility of significant points that might be possible, while not using them will always result in points, but very few. Both will keep the player engaged and competitive.

Do play this delightful tile game that takes you on a trip to your local farmers market. It’ll be worth your time and the amount of mental energy you put into it.