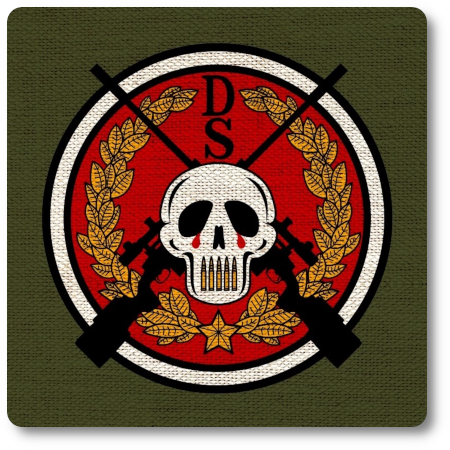 English actor and voice actor Malcolm McDowell said: “One man can change the world with a bullet in the right place.” How true and grim. In this game, you play as a sniper. A highly trained soldier who lies in wait to take out their target. Your only two weapons are a high-powered rifle and patience. You sit and wait for your target, but be careful. Others hunt for you, too, and it is only a matter of time before they find you or you find them. Let the hunt begin!

Dead Shot, designed by Joshua Van Hale and published via The Game Crafter, is comprised of one game board, 24 Recon tiles, 12 General tiles, four Gun mats, one standard 12-sided die, two score markers, six Dope cards,  and 18 Top Secret cards. The game board, Recon tiles, and General tiles are made of solid and thick cardboard, and the Gun mats, Top Secret, and Dope cards are made of durable card stock. The illustrations in this game are wonderful. Cool, colorful, and stylized. I want them on a t-shirt.

To set up the game, first place the game board in the middle of the players, with each player sitting behind the row titled “XFIL.”

Second, give each player their Top Secret cards, Recon tiles, and General tiles. The colors of these components are determined by where the player sits.

Third, have each player shuffle their Top Secret cards and draw one at random. The player should look at this card but keep it hidden from their opponent. Set the remaining Top Secret cards back in the game box at this time. The Top Secret card gives the player the starting position of their Sniper tile and a special ability. 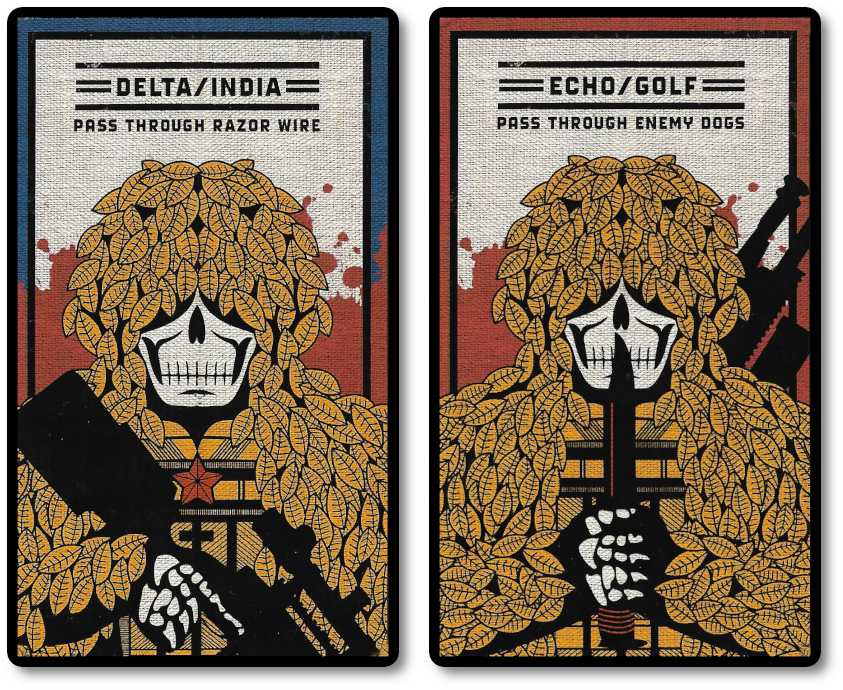 Fourth, have each player select one of the two Gun mat cards. Each Gun mat is double-sided, and each side represents a different type of sniper rifle. The values are different. Available rifles include the TAC-300, M24, M110, and Barret M107. Once the player selects the Gun mat of their choice, have them set it out in front of them with the rifle they selected face-up. Set the remaining Gun mats back in the game box at this time.

Sixth, each player now takes a turn placing one of their Recon tiles, one at a time, also face-down, in their remaining colored areas (which is laid out like a Checkers or Chessboard). Again, each player should do so in a way that ensures their opponent does not see the tile’s face. The only Recon tile that must be placed in a specific position is the “Sniper” Recon tile. This tile must be placed in the location noted by the player’s Top Secret card.

Hunkering Down for the Kill

Dead Shot is played in turns with no set number of turns per game. On a player’s turn, they can take one of three possible actions.

This action allows the player to select one Recon tile or one General tile on the game board and flip it over, revealing it to both players. This tile stays face-up for the duration of the game.

What’s important to note here is that when you flip over a tile, the player’s opponent now has the means to attack the player. Not necessarily always an easier means, but certainly a different approach. This is done in the form of “shooting.”

The Gun mat is shaped like a target, and the center is a kill (or in-game terms, has no adjusted value). When an opponent flips over and reveals a card with a number value, they adjust their score marker’s location by moving it to the lowest know and revealed number. The number “15” in the center with all other numbers representing an area outside of the center. 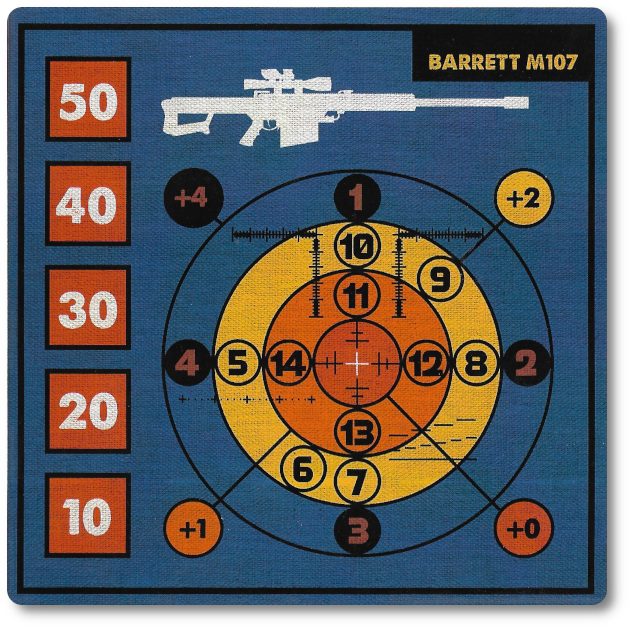 Using the number on the Gun mat and rolling the 12-sided die, the player determines if their shot is a kill or not. Before doing so, the player counts the number of spaces between their sniper’s location and the target tile. Each space is considered 500 meters, and players cannot count diagonally. After determining the space between their target and their sniper’s location, they take the matching Dope card that indicates the points earned for the shot per the distance. The closer you are, the easier the kill. 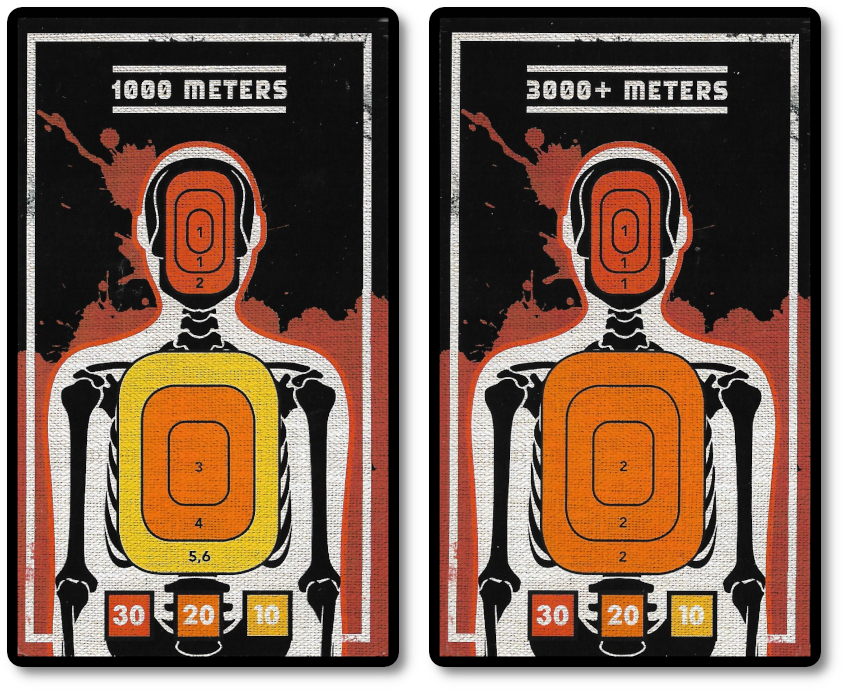 The player then rolls the dice and adds to it the adjusted points per their Gun mat. The Dope card will indicate if the number values between 1 and 6 is a kill or not, awarding a certain number of points per shot.

But before you get all trigger happy, understand that taking a shot reveals your sniper. Yep, if you take aim and squeeze the trigger, your opponent will know where you are hiding. As such, and in true life, a sniper should wait and wait for the best opportunity. But don’t take too long, as victory is never given to those to hesitate.

Once you decide to take a shot, reveal your Sniper tile by turning it over. It will remain visible for the duration of the game.

Move to XFIL (which is short for exfiltration or extraction)

When it’s time to extract the sniper, the player must move their Sniper tile through the wartorn landscape by lifting their Sniper tile and going from one space to the next until they are back in the XFIL row. Tiles that are revealed give the player a clear path on what they should avoid, but moving over a tile that has not yet flipped will automatically reveal it. 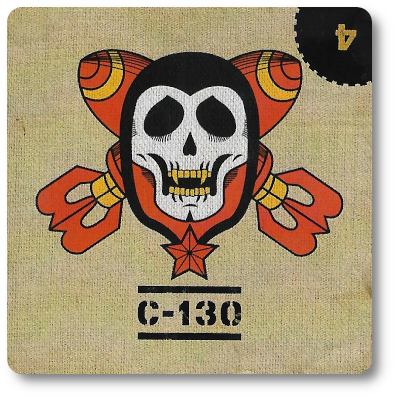 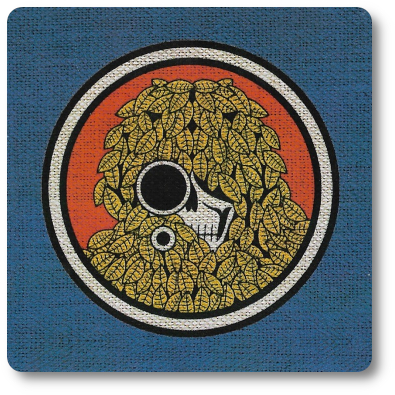 The game ends when either a player kills their opponent’s general and escapes or their sniper is killed. Points are earned for the following results:

The Child Geeks enjoyed the game, finding it fun to “hunt” for the general and determine when best to take a shot. According to one Child Geek, “You have to sit and wait, be patient, and flip over the right cards. But don’t wait too long. The other player is doing the same and is going just as fast as you are. You’ll eventually have to take a shot, but don’t do it too early!” Another Child Geek said, “I liked the game. It was like Hide-and-Seek, except with guns and generals, I guess.” When all the votes were in and the last shot fired, the Child Geeks took a vote. It turns out that Dead Shot was a real killer, resulting in full approval from our Child Geeks.

The Parent Geeks enjoyed the game, as well, finding it to be a fast and fun exercise of hunter/killer style gaming with a light sprinkling of memory and proper planning. According to one Parent Geek, “Reminds me a bit of the old game I grew up with titled Stratego, where you had to hunt for the other player’s pieces. Good stuff. I enjoyed it and found it fun to not only need to plan my attack but also my exit!” Another Parent Geek said, “Fun and a bit nail-biting at times, too. Once you take your shot, you are out in the open. It really sucks when you miss, and now you are exposed. Died a few times because of a bad dice roll, but you can always bug out if things get too hot. I liked the game a lot.” When the last sniper returned to base and completed their mission debriefing, the reports showed that Dead Shot was a complete success and earned the Parent Geeks’ full approval.

The Gamer Geeks liked the game but found it a bit rushed at times and lacking the level of depth they would normally enjoy. According to one Gamer Geek, “I like the game and the concept, but it feels a bit one-sided, and I want there to be more to it. I had fun, but every game left me wanting more and not in a good way.” Another Gamer Geek said, “I’m torn. I think the game did a good job, but I think there should be more to it. It feels a bit unfinished, even though the game itself is more than playable. Just doesn’t feel – I don’t know – complete.” When the general was targeted and put down, the Gamer Geeks gave their vote and found that the game didn’t quite hit the mark, giving Dead Shot a mixed endorsement.

Dead Shot is a game in two parts. The first is the placement of the tiles. Don’t believe for a second this is a simple exercise. The Top Secret card the player selects determines their Sniper tile location, but everything else is up to them and their opponent. You have to plan during this step of the game and know your advantageous and weak spots. If G.I. Joe taught us nothing else, knowing is half the battle, and this is truly the case in Dead Shot.

The second part of the game is hunting and being patient, which is hard for two reasons. First, each time you flip over a tile, you get closer to revealing your target, but so does your opponent. Time is not on your side. Second, you don’t want to take a shot at the enemy sniper or the enemy general too early. Doing so will tip your opponent off about your location, and you might not have the best intel to take a shot worth a damn in the first place.

And therein lies what I like most about this game: the risk versus reward questions you ask yourself.

Do I fire now and take a chance I won’t hit, or do I wait and hope that I find my opponent before they find me? Good questions that are not easy to answer when all the action around you makes it harder to hide in plain sight. This results in a quickening pace of the game, and a growing sense of unease as your opportunity to fire in safety quickly becomes less possible.

Do try Dead Shot when the opportunity presents itself. It’s a challenging game, but not how you might think. The gameplay is easy, but knowing how to play right and taking your time is the real challenge. Take a chance and hide in the jungle to see if you can get a clear shot of fun with this game.