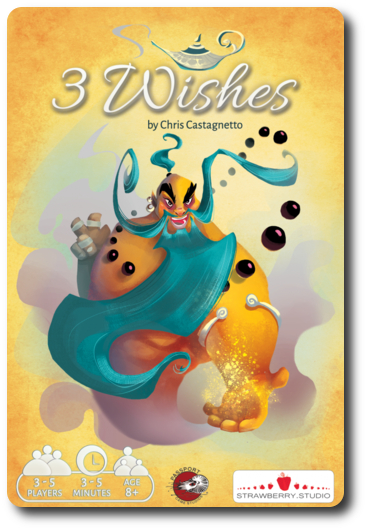 Imagine if you had three wishes. You could have anything; be anything. Would you wish for power, wealth, or would you selflessly wish for others? Perhaps world peace? How about no more sickness, pain, or hunger? Your imagination is the limit, but in this game, your wits and memory are the key to getting what you wish for.

3 Wishes, designed by Chris Castagnetto and published by Passport Game Studios, is comprised of 18 Wish cards, 10 wooden markers, and 5 player aid cards. The cards are as thick and as durable as your standard playing card. The wooden tokens are solid little cubes. The illustrations on the cards, by Magdalena Markowska, are colorful and whimsical.

What is Your Wish, Master?

To set up the game, first determine how many cards you will be using. Remove the necessary cards and place them back in the game box.

Second, shuffle the remaining cards and place them face-down in the middle of the playing area to create the draw deck.

Third, draw the top card from the draw deck and place it in the game box without revealing it to any of the players.

Fifth, each player, in turn order sequence, draws three cards and looks at one of them. Then the player places all three cards face-down in a row in front of them.

Note: At no time should a player share any information about their cards!

Your Wish is My Command!

3 Wishes is played in rounds and turns with no set number of rounds or turn per game. On a player’s turn, they take up to 2 actions. The actions are summarized here.

The player may look at any one card in front of any player (including themselves) or in the center of the table. When peeking, the player should make certain they do not inadvertently give any information away.

The player may swap the position of any two cards in play without peeking or revealing them to other players.

A player can only declare victory (thus ending the game) on the fourth and subsequent rounds of gameplay. Additionally, it’s the only action the player can take on their turn. That is to say, a player could not Peek and then Declare Victory on their turn.

Your Wish Is Granted!

The game comes to an end when one player takes the Declare Victory action. All players now reveal their cards by flipping them over. If a player has one “Superpower”, one “Gift”, and one “World Harmony” Wish card, they score a number of points equal to the total printed on the Wish cards. Some Wish cards may change how the cards are scored or even remove the player from the game! 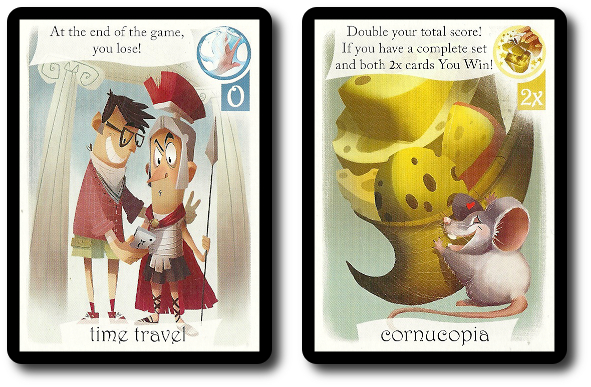 The player with the most points wins the game. Any player who does not have the required Wish cards at the end of the game loses by default.

A single game of 3 Wishes is exceedingly short. It’s often desirable to play several games back to back. Each game is played as described above and new games repeat the setup process. The only difference is the inclusion of the wooden cubes. One is given to the player who is awarded victory in the game or two are given if the player won both the current and the last game. After a player collects 5 or more cubes, the game ends. The player with the most cubes wins.

The Child Geeks had a difficult time at first, mostly because they weren’t spending the necessary time and energy to memorize where cards may have gone and who had what. Inevitably, one or more Child Geeks always passed cards they didn’t intend to or looked at a card they already knew about. This made the games much longer than 5 minutes in length (the longest game took 12 minutes), but at no time did any of the Child Geeks not have fun. According to one Child Geek, “I like the game. The hardest part is remembering where cards are and what cards you have and where they might be on the table.” Another Chid Geek said, “Great game! I like it because you have to use your mind a lot.” When the games were over, the Child Geeks got their wish and voted to approve 3 Wishes.

The Parent Geeks had a significant advantage over the Child Geeks when they played, having the ability to focus in more and use tricks they had learned to remember where cards were being placed. As such, most of the Parent Geek games were with their Peers, reserving family games to those where the Child Geeks were older and more experienced. With just their peers, the Parent Geeks found 3 Wishes to be fast, fun, and challenging. Games lasted around 5 minutes (the noted average time of gameplay according to the publishers) and were fairly cutthroat. Games were usually played in silence as all the participants concentrated and memorized. According to one Parent Geek, “A fast game, but also a very challenging one. The winner of each game certainly works for it.” Another Parent Geek said, “Excellent. I can play this with any of my friends, be they gamers or not.” The Parent Geeks all voted to approve 3 Wishes.

The Gamer Geeks found the game to be simple in theory, but difficult in practice. According to one Gamer Geek, “The game is much more challenging than one originally believes. Not only are you challenging yourself to memorize a number of cards, but you are also pushing yourself to take risks in order to be the winner.” Another Gamer Geek said, “If this was just a memorization game, I’d give it a thumbs down out of lack of interest, but the competitive nature of the game, coupled with the risk taking to get more points really makes it interesting.” All the Gamer Geeks agreed that 3 Wishes was light and fast, not the typical game they would play in an evening, but most definitely one they’d welcome to their elitist table as a game filter. The Gamer Geeks all voted to approve 3 Wishes.

I found myself slightly unnerved while playing the game and more than just a little stressed. Every player in the game knows about one card they hold and through actions, learns more about their cards and their opponents. But each time you learn something, you learn not only about a card, but about how little you really know. All the while, you are watching the other players in an attempt to learn something from a gesture or a side remark. You start to feel a bit stressed, excited, and self-conscious as the game continues because you know that someone will soon declare victory and end the game!

This game is not a slow burn. It ignites and takes off, dragging the player at times and pushing them, as well. I found it to be a great deal of fun as I attempted to push my own limits and beat the clock and my opponents to the punch. It feels great to declare victory, but is a giant kick to the butt when you realize you didn’t win the game. It all comes down to the cards you have. Just because you have the cards to end the game doesn’t mean you should. You have to consider what the other players have, what cards you know about, and finally, what you have in front of you. Taking all that into account feels like a lot, but the game is light enough to allow players to think hard without feeling taxed. Stressed, you bet, but never to a point where the game feels to be a burden.

Do try 3 Wishes when time allows. Its simple gameplay makes for a beguiling experience that will keep you on the edge of your seat and frowning with a broad simple from the first card to the last.