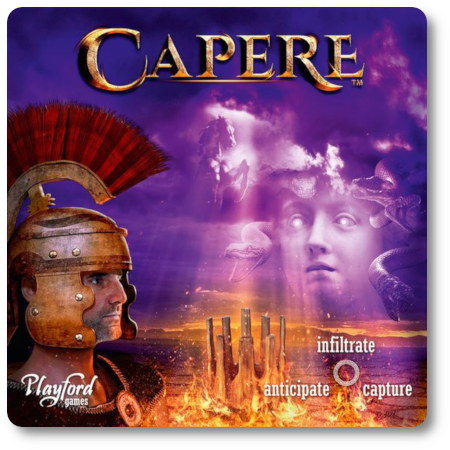 English author of fantasy novels (best known for his Discworld series), Terry Pratchett, said “Most gods throw dice, but Fate plays chess, and you don’t find out til too late that he’s been playing with two queens all along.” When it comes to the fate of man, we like to think we have both hands on the wheel. Controlling our own destiny. Which we might or might not. What if celestial beings took an interest in us, for better or worse? How could one win their favor and avoid their wrath? Not easily…

Capere, designed by Paul Ali and published by Playford Games, is comprised of one game board, one cloth bag, 24 Solider blocks (eight black, eight white, four brown, four off-white), 44 Movement cards, 8 God cards, and two standard six-sided dice. The Solider blocks are made of cut stone. The cards are as thick and as durable as your standard playing card. The game board is made of thick cardboard. The artwork, by Stefan Kolmsperger, is functional and clean.

To set up the game, first place the game board between the two players, in the same way you’d place a Checkers or Chess game board.

Second, have each player take the eight Soldier blocks of their color of choice (the brown and off-white blocks are not used) and place them on the circle spaces on the first row that is closest to them. Give each player a six-sided die that matches their selected Soldier color and set it aside. The number value on the die at this time is irrelevant.

Third, take the cards, shuffle, and place in the cloth bag.

Pray The Gods Ignore Us This Day…

Capere is played in turns with no set number of turns per game. A game turn is summarized here.

Step One: Select a Card to Play

The player has two choices. They can either take the cloth bag and blindly draw one card or they can play a previously drawn God card.

If there are no more cards to draw in the cloth bag on the player’s turn, regardless if they plan to draw a card or not, the discarded cards and any unplayed God cards saved by players are collected, shuffled, and placed in the cloth bag. The player must now draw a card, since there is no chance they have a saved God card available. The point being made here is that the Gods only give their favor for a limited amount of time. Use it or lose it.

Soldiers may move in any direction but diagonal and can change direction at any time.

If the card drawn is a “Medusa” God card, it’s immediately resolved. Medusa turns all the player’s Soldiers to stone (which they already are – [insert laugh here]) and this step of the player’s turn is now over. 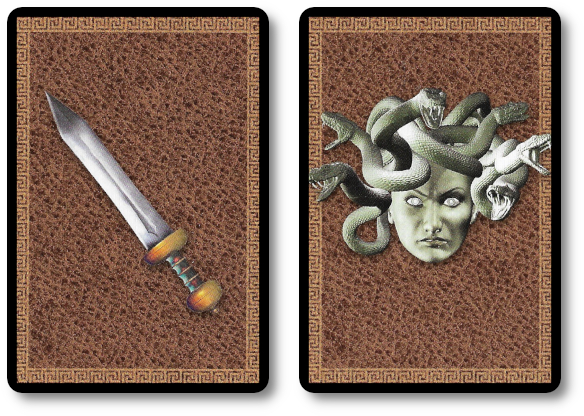 All other God cards can be either played or saved for a later turn. If the player decides to save the God card, it’s placed face-up in front of them and they continue to draw cards until they either decide to play a saved God card, draw a “Medusa” God card, or draw a Movement card. 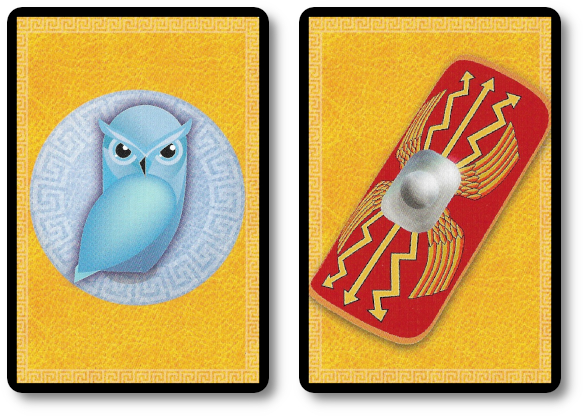 The “brown” God cards change the rules of how Soldier’s move. They cannot be combined with a Movement card, however. 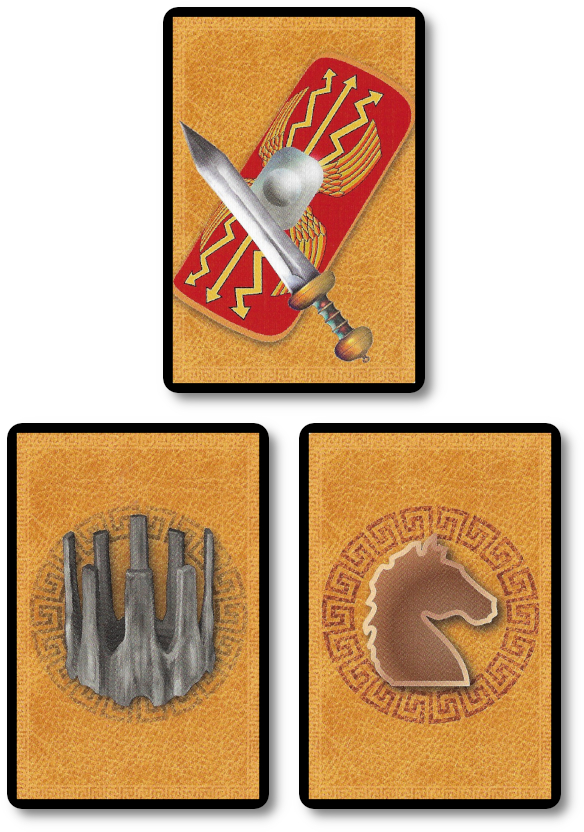 After the card played is resolved, it’s discarded to a discard pile next to the game board. The card is not returned to the cloth bag at this time.

Each player now counts the number of points they have scored this turn. Points are scored as follows:

Points are kept track of by using the six-sided die. When the first point is scored, the die value is adjusted and placed in front of the player.

The player’s turn is now over. The next player now takes their turn unless the Gods have willed it be skipped.

The Blessed and the Cursed

The game continues as noted above, with each player taking and resolving their turn, until a player scores a total of six or more points at the end of their turn. This player is the winner. Alternatively, if a player finds that they cannot make any movement with their Soldiers on their turn, their opponent wins the game.

The brown and off-white Soldier blocks are used in the four-player game variant. Each player will have four Soldier blocks (four black, four white, four brown, and four off-white) and set them up in the middle of the first rows of each of the four sides of the game board.  The side the players take will determine who their partners are. Turn order sequence is clockwise, but every other player is skipped, meaning no team will have two turns in a row. Teams can combine their Soldiers to capture opponent’s Soldier and share points. A saved God card can be used by either player on the team. The end of the game is triggered in the same way as the two-player game.

To learn more about Capere, visit the game’s web page.

The Child Geeks quickly learned and got into the game. The rules to Capere are small in number and the game play is easy to pick up. In just a few moves, the Child Geeks had everything down with only the occasional question about what a God card meant. There is no way to avoid this and the rule book does a good job of calling out the cards, making it easy to scan for a solution. According to one Child Geek, “Reminds me of Checkers, but I like it better. I guess the only thing I wish for is that the pieces looked like soldiers instead of squares.” Another Child Geek said, “I’ve played this game twice and beat the pants off the other player twice. I like this game!” When all the soldiers were recalled from the field, the young Child Geek generals reviewed their troops and the game, giving both a firm thumbs-up.

The Parent Geeks, who are always in the market for a game that is fast to play, engages the players, and leaves everyone feeling satisfied enjoyed Capere right from the start. According to one Parent Geek, “I’m so sick of Checkers and Chess. This game could not have come at a better time and makes me want to look for more games like this.” Another Parent Geek said, “A fun game against a friend and against my kids. Easy to pick up and fun to play. Not easy to win, but not difficult to learn from your mistakes and make better choices. You naturally improve and that feels great.” When all the games were over, the Parent Geeks all agreed that Capere was a solid game, easy to learn, and a lot of fun to play.

The Gamer Geeks were harder on Capere, but it won them over in the end. According to one Gamer Geek, “A game needs to be several things if it is going to get my vote. First, it needs to be fun to play. Second, it needs to challenge me. And third, I need to still be thinking about the game after I have left the table. This game did all that.” The Gamer Geeks, who are no strangers to abstract strategy games, found the tactical thinking and strategic game play to be light, but always worthwhile. As one Gamer Geek put it, “It doesn’t matter if a game makes me think a lot or very little as long as it makes me think before I take my move.” The Gamer Geeks were surprised to learn that they all enjoyed it (to various degrees), as the game looked very uninteresting when I presented it to them. They learned a good lesson. A game is more than the sum of its parts. The Gamer Geeks, being wiser than when they first played, voted to approve Capere.

The game comes with the tagline, “Infiltrate, Anticipate, Capture”. All three are a must if you want to win Capere. In fact, “capere” is Latin for “to catch” and that is the real goal of the game. To corner your opponent or force them to corner themselves. That is not easy, but it’s certainly fun.

I liken this game to an updated version of Checkers, which doesn’t really need to be improved or updated, but I like what this game did. The goal is obvious, but not the path to reach it. There is enough tactical and strategic thinking to make you lean over the board and really want to think though your move. The level of randomness is also spot on, making each card draw from the bag a possible change in plans, but more times than not, all goes well. But because there is a chance you could draw a card you don’t want or trips you up, each reach into the bag makes you slightly tense. A blind pull of fate, if you will.

Abstract strategy games seem to be a dime a dozen nowadays. Everyone has a game that fits the “abstract” ideal. This game is really no different, but because it’s so easy to learn and fast to play without dumbing down the level of thought you need to put into, the game stands a bit taller than the rest. It’s well designed, plays clean, and has always challenged me. You can, if you are not careful, be a bit too clever and outsmart yourself.

Do try Capere when time allows and see if it captures your fancy.