Ants in the Pants Game Review 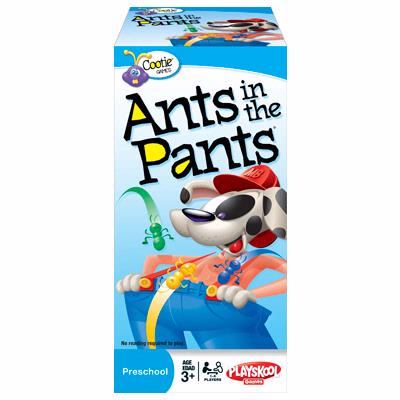 Ants in the Pants requires the players to quickly (and accurately) flip little plastic ants into a pair of very big blue trousers. Hand/Eye coordination is a must, but there is a little more to it than simply flipping. This game is also an excellent introduction to visuospatial skills, strategy & tactics, and counting & math. With so much being offered to your little geek in such a fun way, it is hard to not enjoy the game as an adult and want to join in on the fun!

This game is comprised of 1 pair of big bucket-like trousers, 1 pair plastic suspenders, 16 ants (in four different colors), and a cardboard dog cutout (used as backing). All of the components are thick, sturdy, and intended to last a long while. Which is a very good thing, considering the target audience is young little geeks who can be very “hands on” with their toys.

Game set up might require an older geek to be present as the game does not fit in its box once it is fully constructed. That being said, your little geek shouldn’t have a problem building the game themselves after a few tries. To set up the game, the cardboard dog cutout is set in the middle of the plastic bucket trousers, separating the trousers into two sections. Next, the plastic suspenders are connected to both sides of the pants by looping them through the cardboard dog cutout. Last, each player gets 4 plastic “ants”. Each set of four ants is a different color, making it easy for your little geeks to separate the ants for each player. It might also be a fun and worthwhile exercise for your little geeks to count each ant to ensure that each player is getting the same number to play with.

Once the game is set up, the players position themselves around the front, back, and side of the blue trousers. A player shouts “Go!” and everyone, at the same time, attempts to flip their plastic ants, one at a time, into the blue trousers. This is done by pressing the back end of the plastic ants and letting your finger slip off it. This will result in the plastic ant springing back into its original position and “jumping” into the air as a result.

The first player to flip all four of their ants into the blue trousers wins!

I predict this game will be a big hit for my 6 and 3 year old. No real rules to speak of and fast-paced game play will make this a fun and exciting game for them. After I explained the rules to my little geeks, I asked them their initial thoughts.

Having both the boys claim their ant color of choice, position themselves wherever they wanted around the big blue trousers, we are set to play. But will it be fun?

As expected, the game was a success, but also tested my little geek’s patience. The ants are not easy to flip, or better put, they are not easy to aim. Flipping is easy, but the ants tend to go where they want and it took all three of us a number of times of trial and error (mostly error) to get our own specific form worked out.

The winner, by far, was my oldest little geek. He must have magic powers or something, because he was able to consecutively flip his ants into the trousers at record speed. I have to figure out how this ability can be used for good and make him successful in life. The next strongest player was my middle little geek, who was always just behind his older brother, much to his disappointment.

I sucked at the game. I could not, for the life of me, get those silly ants to go into the pants. Oh, they wanted to, but I always came a little too short of the mark or just a little to much to make it go in. Clearly, there is work to be done in the area of “dexterity games” for this father geek.

After playing the game a number of times, we talked about what we learned and what benefits the game could provide. We all agreed the game was entertaining and when I asked them what they thought the “Geek Skills” were, they both agreed that hand/eye coordination was a given. When I also suggested that strategy and tactics were part of if (in regards to where you position yourself, the timing of when you should flip your ants, and so on), they did not agree. As far as they were concerned, the game was a race and you simply just had to flip faster than the other players.

True, that might the be case, but I do believe there is room to start the process of teaching the basics of strategy and tactics, but agree that the game does not provide a lot of depth. Still, this is a little geek game for the youngest of your little geeks and it is unfair (and unrealistic) to expect the game to be anything other than fast and fun. Which it is.

I highly recommend Ants in the Pants to parents and grandparents looking for a fun game to play on the table or floor. Takes seconds to teach and everyone plays at the same time. Very little downtime and quick set up/clean up makes this a game you can get out, play a bunch, and then move on to the next activity, quickly. My little geeks now get this game out themselves and play with it with friends and each other. Great to see them actively seeking out games on their own and having  a great time playing.

2 Responses to Ants in the Pants Game Review