Off Your Rocker Game Review 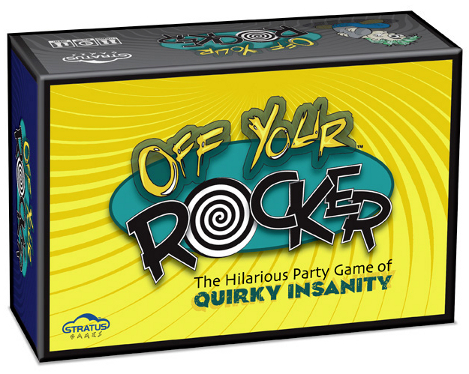 Welcome to your group therapy session, Doctor! The patients  are waiting and look forward to working with you. Just know a few things before you begin. First, they don’t really want you to succeed, as they kind of like being crazy. Second, while they won’t lie, they won’t be overly eager to talk to you about what is going on in their head. Well, to a point, anyway. Other than that, have fun! Remember, your job is on the line, but try not to think about that. GOOD LUCK!

Off your Rocker, by Stratus Games, is comprised of 200 Quirk cards (contains 2 quirks per side, for a total of 800 quirks in total), 40 Point cards, and 1 sand timer (counts down 3 minutes). The game box is small making it an easy party game to travel with to your next party or party-like destination. 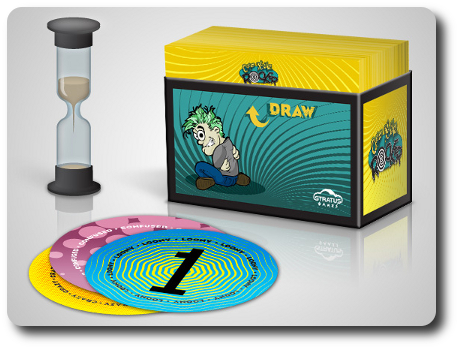 To set up the game, first put all the players in a circle.

Second, assign one player (and a backup) to manage all the Point cards and sand timer. This is done to help game play go smoothly and quickly.

That’s it! Time to get crazy. Or, in some cases, crazier.

Welcome to the Mad House

The game is played in rounds, with each round being something of a group therapy session. A typical round is played as follows.

The group now randomly selects a Quirk card. There are 2 quirks per card side and either the front or the back of the card can be used. The quirk describes the odd affliction that everyone in the group will manifest during the question and answer period of the round. For example, “each answer must contain a word that rhymes with ‘cat’ “. Once selected and understood by all the players in the group, the card is set aside and the Psychiatrist is invited back into the room. 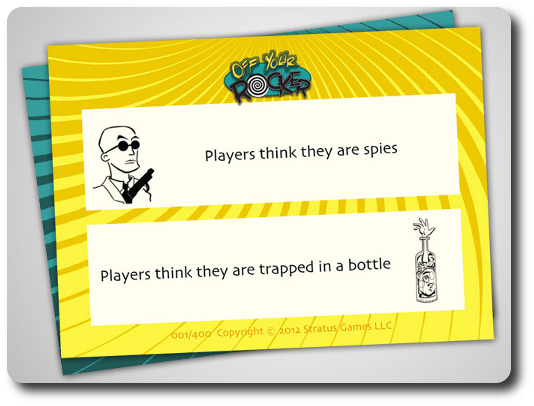 The Psychiatrist can begin with any player they like in the circle, but can only ask each player one question each. Any question is valid except those that directly relate to the selected quirk. Put another way, the Psychiatrist cannot ask a question that requires any member of the group to state what the specific quirk is. For example, the Psychiatrist could not ask, “What’s your quirk?” or “Does your quirk involve robots from another dimension hellbent on taking over the local fast-food chain?” Instead, questions asked by the Psychiatrist should be phrased so that it allows for the quirk to manifest within the answer, both verbally and psychically (as in “body language”).

After the Psychiatrist has asked each player in the circle a single question, they have two options. The first option is to guess what the quirk is that’s afflicting the group. The answer need not be word-for-word matching the Quirk card, but the players in the group should decide if it is close enough to be valid. The Psychiatrist only gets one shot at the answer, so if they don’t feel they know enough, they can take the second option.

If at anytime a player in the group incorrectly answers a question or their behavior directly contradicts the selected quirk, the group (or any member of the group) should state in a very loud voice, “YOU’RE OFF YOUR ROCKER!” This is a verbal clue that the player who was answering the Psychiatrist’s question was blatantly or unintentionally misleading and doesn’t support the quirk attempting to be guessed.

If the Psychiatrist is able to guess the quirk during the round, they earn 1 Point card. This is taken by the Psychiatrist and they sit down, rejoining the group. If there is any doubt, the players in the group take a vote.

The players in the group now vote among themselves who they think gave the best performance based on the quirk. The vote is cast with all the players simultaneously pointing to a player. Players cannot vote for themselves or the Psychiatrist (which would be crazy). Each player who gets a vote (regardless of the number of votes) will only get 1 Point card. The player who gets the most votes is the Psychiatrist during the next round unless a player has won the game. Note that the Psychiatrist cannot participate in this vote but is welcome and encouraged to help with the vote counting.

All collected points can be kept hidden if the player wants to spend the time and energy to do so. Nutty people sometimes have trust issues.

The game continues until one of two possible endgame conditions are met.

If the players think the basic game is too simple, they can include the option of allowing the Psychiatrist to request the group select 2 quirks from the Quirk card. The selected quirks are used simultaneously during the question and answer period of the game. If the Psychiatrist guesses both quirks correctly, they will gain 2 points. Guessing only one or failure to guess both correctly will result in the Psychiatrist being awarded zero points for the round.

To learn more about Off Your Rocker and read the full rules, visit the game’s web page.

I was asked by Stratus Games to assist in some early playtesting with Off Your Rocker. I had my groups help out during this exercise, and even when the game was still being developed, we had a great time playing it. The game itself hasn’t changed much from its early playtesting release. Improved and streamlined, but the core game mechanisms and thematic game play are just as strong as ever.

Therefore, there is nothing to predict. Our groups have played this game. All I have to do is put it in front of them and state, “Hey, guys! Remember this game?” Which they will as this game is very rememberable.

Off Your Rocker is a favorite, if not the favorite, party game for our Child Geeks. It’s a game you play as a group, laugh as a group, and everyone is encouraged to be silly and creative. For the Child Geeks, this was like recesses or playtime or whatever it is they call it nowadays when they released the kids into the playground to burn off energy. Even so, the Child Geeks didn’t just run amok. They showed a surprisingly high level of self-control when answering the questions, and demonstrated outstanding listening and communication skills when playing as the Psychiatrist. The only part of the game that will need to be modified for the Child Geeks are some of the quirks. All family friendly, but some will be difficult for them to portray or understand. For example, it is impossible for a 5-year-old to act like they are stuck in the 80’s when they don’t even know what a Walkman is. Another example is a quirk that wants the player’s to act like they think the Psychiatrist is suicidal. Suicide is not something a Child Geek will readily understand. Adults should use their best judgement in all cases.  The Child Geeks approved this game and loved playing it every chance they got. 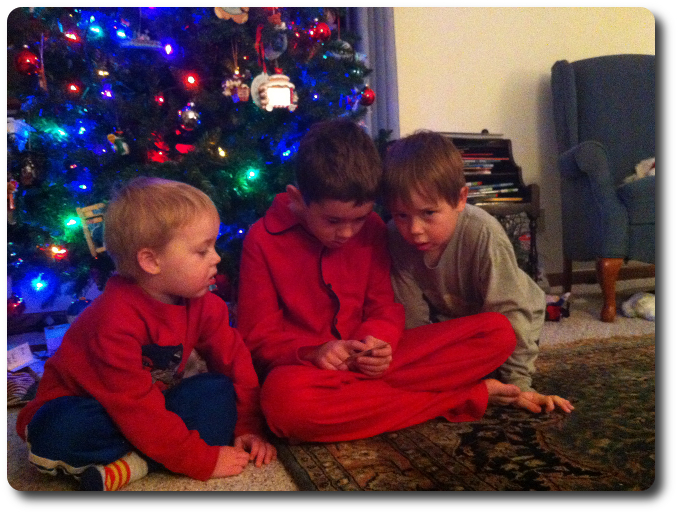 Parent Geeks shared their Child Geek’s love for this game. The only ones who did not were the ones who weren’t comfortable acting strange in front of large groups. This is the only negative side of the game, according to the Parent Geeks. Players must be willing to open themselves up to silliness, put some of their inhibitions aside, and fully play to the quirk. If a player holds back, plays rather reserved, or doesn’t get into the feel and energy of the group, the game will fall flat for them and somewhat negatively impact the game for everyone else. As such, the Parent Geeks (and even non-gamer geeks) wanted me to make sure to tell you two things. First, do get this game. Second, don’t play this game with fuddy duddies.

Gamer Geeks, despite the poise and air of elitism they wrap around themselves like a wool cloak, loved this game. This came to me as a big surprise as most Gamer Geeks will poo-poo a party game. Turns out, however, there is a lot more “party” than “game” in Off Your Rocker, and that’s what made all the difference. Take a moment to absorb that. The game itself wasn’t what pleased and lead the Gamer Geeks to approve it in the endorsement. It was the party and entertainment the game provided and amplified. So, there you go. Turns out even a party game can win over the Gamer Geeks as long as the game includes a party in the box. Which, lucky for everyone, Off Your Rocker does.

This is a wonderfully silly, creative, and social party game. It takes the old stuffy 20 Questions and breathes new life and energy into it. It works beautifully with large groups, but you’ll most likely want to break up very large groups into smaller ones. Then again, maybe you won’t. This is a game that feeds off a player’s energy and exponentially improves for every player you have in the circle. Like all party games, however, it can succumb to the apathy of party poopers. Know your audience before you introduce this game. For example, I would not bring this to a party where I would be meeting new couples and families for the first time. Hmmm…awkward.

If you are looking for an energetic and entertaining party game, you can’t go wrong with Off Your Rocker. Do play this game when you get a chance and don’t be surprised if it drives you crazy with hilarity.