Two games in one are included here that play very differently. One is very passive in its approach as the players compete to quickly match a pattern that can shift. The other is an aggressive area control game that requires critical thinking and foresight with defensive and offensive positioning. Two very different games offered from one little green bag.

This is two games in one by Looney Labs. The title of the game, Treehouse, is the largest of the two games and is comprised of 1 rainbow Pyramid stash (4 Pyramid trios in the colors of black, red, yellow, and green in sizes small, medium, and large, for a total of 12 Pyramids) and 1 Treehouse die (a custom six-sided die). The bonus game is Pharaoh, which uses the Pyramids from Treehouse and also includes 1 standard six-sided die, as well as a cloth 5×5 square grid. All the components, including the two rule sheets for both games, fit in a small green pyramid shaped bag making the game exceedingly portable.

Note that Treehouse has been released before by Looney Labs, but it only included one game. The new release in 2012 is the game edition we are discussing in this review. 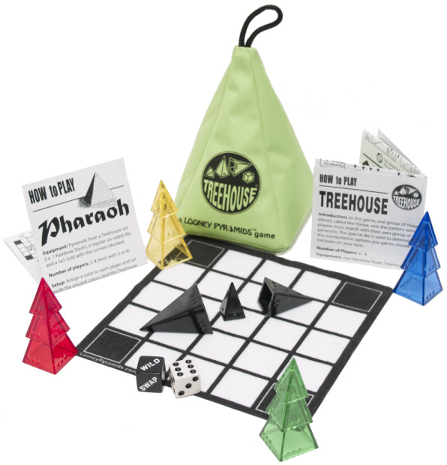 Playing in the Treehouse

Treehouse is a pattern matching game. The goal for every player is to change their Pyramid pieces to match the “Treehouse” in the middle of the playing area. This is done by rolling the custom six-sided die (the Treehouse die) and completing the action the die text suggests.

To set up Treehouse, first give each player 1 set of Pyramids (1 small, 1 medium, and 1 large) of the same color.

Third, each player now stacks their Pyramid pieces into a “tree”. A “tree” is a set of 3 Pyramids (small, medium, and large) with the large Pyramid on the bottom, the medium in the middle, and the smallest on the top. Players should place their trees in parallel to the center Treehouse. The instructions suggest that the players imagine parallel lines on which they will play to and on. 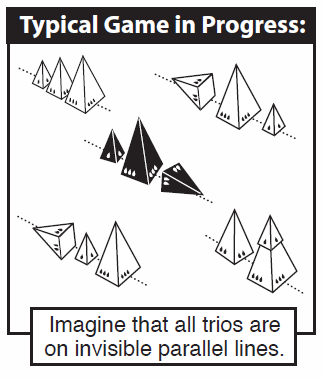 Fourth, determine who will go first and pass them the Treehouse die.

The game is played with each player taking a turn and rolling the Treehouse die. Each die face has a word instead of a number value. The word on the die describes the action that must first be taken using the player’s Pyramids. If the player cannot complete the action using their pieces, they must use the center Treehouse pieces. If the player is still unable to complete the action, they re-roll the die. The actions are summarized here and are highly detailed in the game rules.

Once the player completes their action, the die is passed to the next player going clockwise.

Players continue to tip, aim, hop, dig, and swap their Pyramid pieces and the Treehouse pieces until one player’s set matches the Treehouse set.

The Kings of the Nile 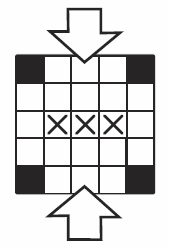 Example of a 2-player goal-line arrangement

To set up the game, first place the cloth 5×5 square grid in the middle of the playing area. Players should sit so they are facing one of the sides of the square. In a 2-player game, have each player sit opposite of each other.

Second, have each player select a set of Pyramid pieces (1 small, 1 medium, and 1 large) of all the same color. Any unclaimed sets are removed from the game. The pieces are placed on the edge, but not on the game grid and should be on the side that is closest to the player.

Third, determine who will go first and pass them the standard six-sided die.

The only other movement restriction are as follows:

Once the player completes their turn, they pass the die to the next player going clockwise.

The first player to occupy the goal-line with all three of their pieces wins the game.

Lots of Games in One

Treehouse is just one of many games that use the Looney Pyramids. Looney Labs provides a pocket guide that details 13 other games that can be played using the Pyramids and there is a large fan community that creates new games and makes them freely available.

To learn more about Treehouse and read the full rules, visit the game’s web page.

To learn more about Pharaoh and read the full rules, visit the game’s web page.

Neither of these two games are overly difficult and should be fairly easy to teach to my 5-year-old and my 8-year-old. Unlike Pink Hijinks, which I found to be a fairly uninteresting puzzle game, both Treehouse and Pharaoh have some meat to them. Still not a fan of a random die roll determining what I can and cannot do, but the available actions allow for more thought and multiple ways to work with the Pyramid pieces. That does interest me. I don’t mind restrictions if the boundaries it creates still allows for creative problem solving and critical thinking.

Teaching the game, as I predicted, was very easy. Treehouse is very abstract, which means your players will have a slightly steeper learning curve if they are not familiar with abstract games. Pharaoh is much like Tic-Tac-Toe, and shouldn’t be a problem for anyone to grasp. The only questions my little geeks had were directed towards the Dig and the Aim actions in Treehouse. I had to demonstrate these a few times using different set ups until they both felt comfortable with it. Other than that, no problems from any of our groups.

And so, as I set up the games for my two oldest little geeks, I asked them their thoughts on Treehouse and Pharaoh so far.

“Treehouse looks pretty simple – just keep moving your pieces until you match. Pharaoh looks more fun because I get to attack other players!” ~ Liam (age 8)

Both of my little geeks are ready to go. I wonder if my 5-year-old will enjoy these games or not, as he didn’t show much interest in Pink Hijinks and left the table before the game was over. Let’s see if this game keeps his interest or just as quickly loses it.

Both of my little geeks stuck with the games, playing them all the way through, and were happy to play another (although, not right away). The games’ pace was fast enough to keep them from getting bored, and there was enough “thinking” to keep them engaged, but not too much to cause their brains to hurt. My 8-year-old, and all Child Geeks who were 8 or over, had no problem playing both games. My 5-year-old played both games very well, but did better with Treehouse than with Pharaoh. Combat games with strategic movement and thinking two moves ahead are just a bit too advanced for him still. Defensive and offensive positioning is lost on him and he tends to focus in on the moment versus future rounds. As a result, however, he did very well with Treehouse and was able to be as competitive as adults. The Child Geeks enjoyed both games, and depending on their age and game play preferences, enjoyed one more than the other. 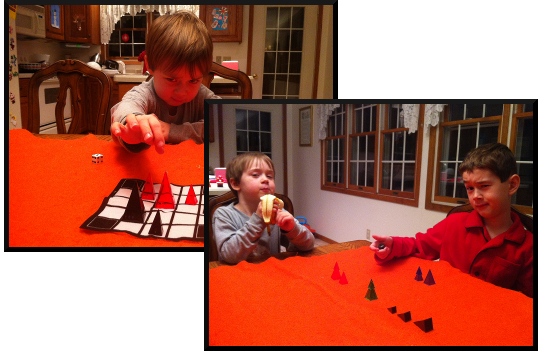 Parent Geeks thought Treehouse was a fun puzzle solver and they were especially pleased that it allowed more than 2 players to compete at once. Pharaoh had a very different feel than Treehouse, and they applauded Looney Labs for including it in the game package. According to one Parent Geek, “This is a really great idea. One purchase allows you to enjoy a passive or an aggressive puzzle solver!” I totally agree because depending on the Parent Geeks I played the game with, one of the two games was much more loved than the other. When I asked if they would buy the game, everyone who enjoyed one or both said yes. The Parent Geeks, be they gamers or non-gamers, all fully approved both games.

Gamer Geeks liked what Looney Labs did with the two games in one approach, and think the game system for the Pyramid pieces is a neat idea. The game itself, however, they did not approve. “It’s just another roll-and-move puzzle solver”, said one Gamer Geek. Yes, it is. Despite the fact that you have a bit more flexibility in “what” you move, Treehouse is still a puzzle game that dictates what you can do with a random roll of the die. Pharaoh wasn’t such a big deal to the Gamer Geeks, either. “Tic-Tac-Toe with some combat thrown in”, is what the Gamer Geeks said. While the Gamer Geeks all said they enjoyed the game enough and would be happy to play it with non-gamers, families, and their little geeks, they didn’t think Treehouse or Pharaoh was a Gamer Geek’s game.

I rather enjoy Treehouse and Pharaoh, but like the Gamer Geeks, I don’t think the two games equal a Gamer Geek’s game. For a family game, it is superb. Playable by all I put it in front of and sits 2 to 4 players with ease, scaling in difficulty appropriately without ever leaving any of the players behind. While an adult will sometimes be very annoyed by the results of the die rolls, one cannot help but acknowledge that using a die to direct the player’s actions is an elegant (if not random) way of making the game accessible to everyone. Analysis paralysis is reduced a great deal because the choice is limited and directed. You either can or cannot do the move. And if you can do the move, how you move is pretty clear. That’s just what the younger little geeks need and frees up the Parent Geeks to play the game as equals, giving their little geeks a chance to play at the table as a real gamer. That, in itself, is worth 3 stars.

If you are looking for a fun and easy to teach family game that comes with not one, but two ways to play that will appeal to aggressive and passive players in equal measure, do take a look at Treehouse and Pharaoh.