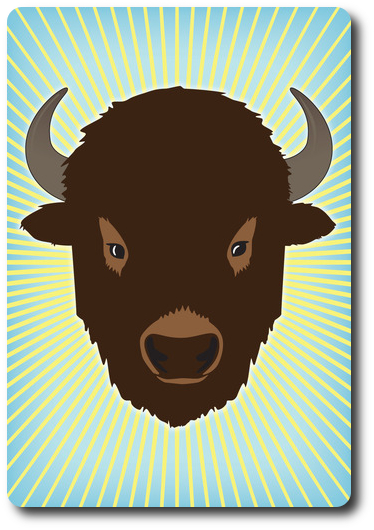 Quick! Name a hairy adventurer! GOOD! Now name an undead superhero! AWESOME! If you are keeping up, then you’re a perfect candidate for this game of quick matches and even quicker name dropping. Your knowledge of literature, pop-culture, history, politics, and just about everything else you can think of will be challenged! Also, expect to feel really stupid at times, as the easiest of answers might not come to you.

Buffalo, designed by Mary Flanagan, Sukdith “Sukie” Punjasthitkul, Max Seidman and published by Tiltfactor, is comprised of 216 Person cards (blue) and 216 Descriptor cards (orange). The Person and the Descriptor cards both have 12 “Buffalo” cards, which show nothing more than the head of a majestic buffalo. The cards are made of solid card stock and very durable.

To set up the game, first separate the cards by color (orange and blue) and give each deck a good shuffle.

Second, determine how many rounds (total cards) the game should consist of and draw that many cards from each deck, face down. There are 216 cards per deck. That’s a lot of rounds. I suggest you deal 10 cards per person. For a long game, use the entire deck of both cards. Whatever cards are not used should be placed back in the box.

Third, set each deck, face-down, in the middle of the playing area and apart from each other. There should be room in-between both decks for cards to be played.

That’s it for game set up. Time to get buffaloed!

The Name of the Game

Buffalo is played in rounds with all the participants playing at the same time. One player should take on the role of the Card Drawer. They still play the game, but have the additional job of drawing cards from the decks.

To begin the game, the Card Drawer will draw 1 card from each deck and place them, face-down, next to each other simultaneously. Now all the players attempt to be the first to name an individual that the two cards describe. The Person cards identify the “what”. For example, a lyricist, a monarch, or a musician. The Descriptor cards describe the “what”. For example, immature, humble, or handsome. Combined, the two provide a descriptive adjective and a noun. For example, “an inspirational movie star”. 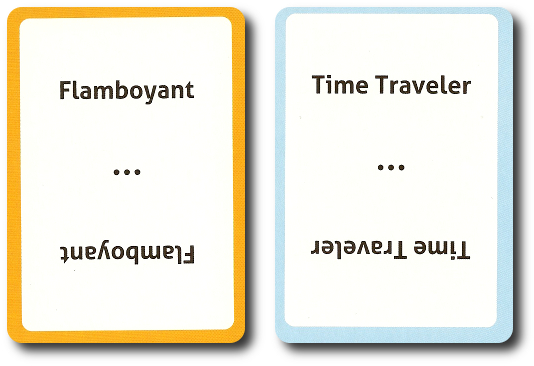 I wonder WHO this could be?

The first player to shout out the name of an individual who matches at least 2 played cards wins the cards used in the match. The name provided need not be a real person. Any character in literature, movies, songs, and television can be used. The only catch is that the name must be known by others players in the game. All cards collected by any player are placed in front of them and held until the end of the game.

Any cards still in play remain face-up until 1 player makes a match or all the players agree they cannot make a match using the cards provided. If such is the case, 2 additional cards (1 Person and 1 Descriptor) are drawn and the processes repeats itself. This adds more possibilities, as a match is made using 2 or more cards. If two or more players shout out an answer at the same time, the player who named a real-life person wins. If both are real, then the cards are distributed as evenly as possible.

It is important to note that claimed cards need not be one of each card type. If a player can successfully name an individual using 2 Person cards or 2 Descriptor cards, they claim the cards used. The only rule that must be followed is that at least 2 cards must be used to create a match. Of what type is going to heavily depend on a player’s creativity and knowledge recall ability.

Within each deck are “Buffalo” cards. When drawn, they are simply set aside. The first player  to make a match using any of the visible cards collects ALL the cards in play (including the “Buffalo card”)! Again, if there is a tie that cannot be broken, the tied players split the cards as evenly as possible.

When both decks of cards run out, the game is over. All the players now count their cards. The player with the most cards wins the game.

To learn more about Buffalo, see the games web page.

I have some misgivings here. First, this is a Trivia game. How much trivia they need to know is not yet clear, but Trivia games have a tendency to upset younger players. Any game that you cannot possibly hope to win simply because you don’t know enough is not a game that many people would want to play casually. Second, Gamer Geeks oftentimes don’t care for Party games due to their lack of engagement and depth. Not all Party games, mind you, but the vast majority I have played with Gamer Geeks don’t resonate well with the gamer elitists.

That being said, I think Buffalo will do very well with the Parent Geeks. The game would appear to be light, fast, and casual. All the kind of things a Parent Geek wants to play after a long day at the office or watching their little geeks destroy their house. For the other groups, maybe we’ll see mixed, but I wouldn’t be surprised if we see some rejections, too.

Teaching Buffalo is very simple and best done by demonstrating how cards are matched. This is the way the game was taught to me at Gen Con 2013 in a very large and loud convention hall. Despite the noise and distractions, the game was easily taught and quickly played. Note that the game does require its players to read, but for those players who cannot, any player can simply read the cards out-loud to assist those who either cannot read, have poor eyesight, or are simply too lazy to do it themselves.

After teaching Buffalo to my entire family, I asked them their thoughts on the game so far.

“I like it. I can see this being a very creative game.” ~ My Mom

“So I can name anything that matches and I’ll get the cards if I’m the fastest? Awesome!” ~ Liam (age 9)

Looks like my party players are ready to party! Let’s play the game and see if it’s a winner or it leaves us feeling run-over.

I’m pleased to report that my fears were unfounded. The Child Geeks were able to participate without issue. For those who could not read, we simply read the cards out-loud, which worked just fine. The younger Child Geeks were obviously at a disadvantage, but only a slight one. Not nearly enough to suggest that they couldn’t be competitive. Indeed, the Child Geeks were claiming cards just as quickly as their opponents, regardless of age. This greatly pleased the Child Geeks and it was clear that their egos were inflating exponentially each time they claimed a card set. According to one Child Geek, “What I like about this game is that it shows other people how smart I am and how stupid my parents are!” Yes, that got some laughs. All the Child Geeks voted to approve Buffalo and told their dumb parents to like it, too.

The Parent Geeks also very much enjoyed the game and found it to be a fun and entertaining experience with their family and their peers. They liked how easy it was to play and the number of players the game could comfortably hold without slowing the game down. According to one Parent Geek, “This is one of those party games I would play regardless if there was a party or not.” Another Parent Geek said, “I can see this game being an excellent icebreaker at parties or whenever I just want to play a fun game with friends and family.” All the Parent Geeks voted to approve Buffalo, and not because their smart kids said so. 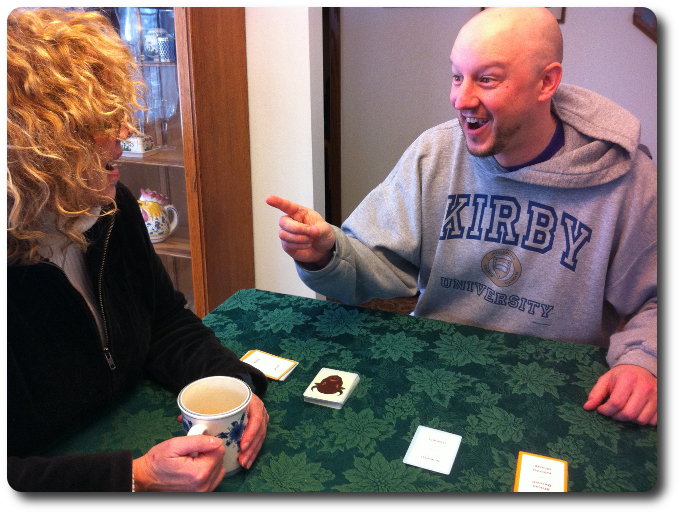 Me, razzing my mom, because she didn’t know who Charlotte Elspeth Pollard was (score for you if you do)

The Gamer Geeks, despite my initial misgivings about Gamer Geeks and Party games in general, very much enjoyed themselves with Buffalo. According to one Gamer Geek, “I can see this being a game I would play with my friends before or after Cards Against Humanity.” Another Gamer Geek said, “This is an excellent and engaging game. It’s easy to learn, easy to teach, and can be highly competitive. Excellent stuff.” What was perhaps the biggest surprise was how much fun the most elite of elitists enjoyed the game. According to one of the self-professed gamer snobs, “I would play this game again.” It really doesn’t get any better than that, folks! All the Gamer Geeks voted to approve Buffalo.

Like all Party games, the game itself is there to keep your guests engaged and entertained. Buffalo certainly accomplishes this with surprising ease, but not everyone found the experience enjoyable for the same length of time. Luckily, any game playing session can be as long as the players like. First to 30 cards, for example. As such, Buffalo never overstayed its welcome, which is also due in part to the way the game is played. Real-Time games keep everyone at the table. With no downtime, except between cards, the game’s overall speed and tempo clocked well with everyone. What was a surprise was how well all our players, regardless of age, were able to remain competitive. This is not often the case for Trivia games, where the dominate players are those who are older and well-read. Our Child Geeks were able to keep pace and even beat the Parent and the Gamer Geeks at claiming cards. This is not a game about how much you know, but how quickly you can recall what you know. A Child Geeks’ mind is a thunderstorm of activity which is hard to focus at times, but when it is focused, look out!

I highly recommend Buffalo to all I speak to. It’s fast, fun, highly replayable, and always a challenge. It’s great for small or large groups, can easily be adjusted for time, can seamlessly add or remove players from the game without upsetting game play, and has always taught me something new. For example, my 9-year-old told me that the answer to “Handsome Philosopher”, was in fact, him.

The more you know…

One Response to Buffalo Game Review