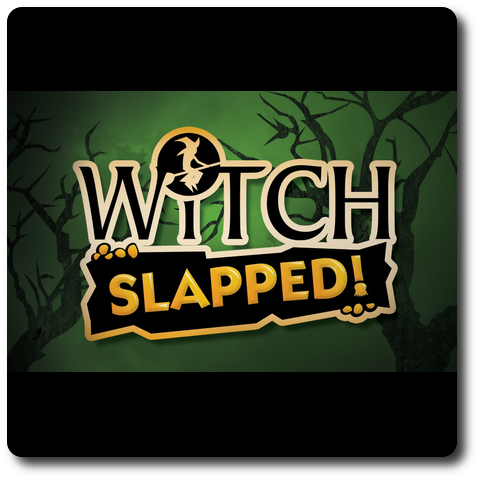 Spells and witches go hand in hand, like black cats and broomsticks. In this game, you will be playing as a witch who has the ability to cast great and terrible spells. Of course, so too do your opponents. The player who is able to cast the most deadliest spells the fastest will cause chaos, but the player who can cast spells the smartest will win the game.

Witch Slapped, designed by John Harris (I), William Sininger and to be published by Prolific Games, will reportedly be comprised of 52 Spell cards, 36 Target Witch cards, 20 Spell Component cards, 18 Lives cards, 5 Cauldron cards, and 4 Effect cards. As this is a review of a prepublished game, I cannot comment on the game component quality. Artists  Jody Henning and John Sauer have done a great job of making the cards clear and colorful.

To set up the game, first give each player 1 Witch to represent themselves in the game and have each player start with 9 Life. Then give each player their set of Target Witch cards, which should include only the player’s witch and their opponent’s witches. All other witches can be returned to the game box.

Third, place the Cauldron cards in the middle of the playing area where everyone can reach them and the card’s number value is visible.

That’s it for game set up. Time to boil some witch’s brew…

Witch Slapped is played in rounds and phases. A single round of game play is summarized here.

The dealer says “GO!” and all players, as quickly as possible, take the face-down card dealt to them and look it over. They must now make a quick decision.

Players MUST have no more and no less than 5 cards in their hand before they can pick up a new card and decide to keep it or pass it along. This continues, again and again, until the next phase is triggered.

As soon as a player has 4 or 5 matching Spell cards, they should slap the “4” Cauldron or “4-5” Cauldron (depending on how many matches they have). This triggers the second phase of the round. All other players must now slap a Cauldron, but the number value on the slapped Cauldron card MUST be equal to less than the number of matching Spell cards in the player’s hand. Once the Cauldron is slapped, it’s taken by the player who slapped it, even if it was slapped by mistake. 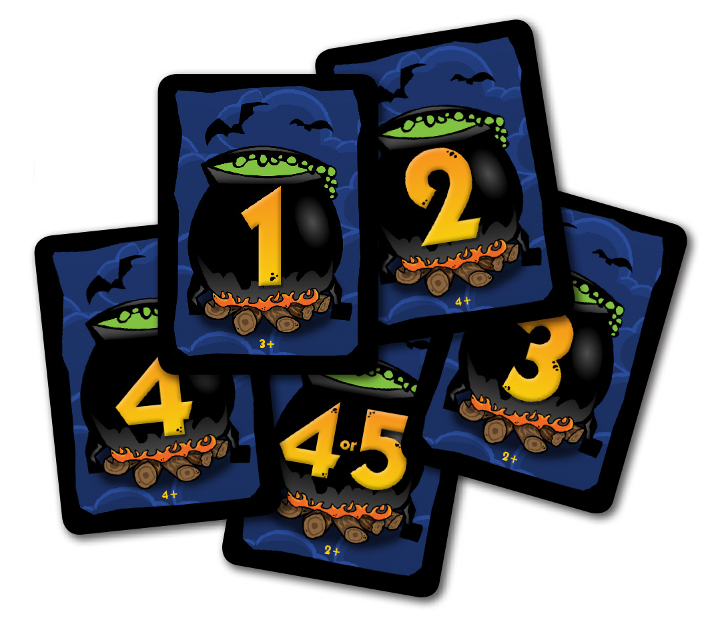 After every Cauldron is taken, the next phase begins.

Now each player secretly decides which opponent they want to cast a spell on. The type of spell and its effect are based on the type and number of Spell cards, but limited by the number on the Cauldron card. Spell effects can range from a slight annoyance to a deadly curse that slowly weakens the player’s witch to death! Counter spells are done the same way, with the player selecting a Witch card that represents the recipient of the Counter spell benefit. Which, of course, is mostly likely the player’s witch.

Spell types include the following. Each type does something slightly different in the game with the most common effect being damage. 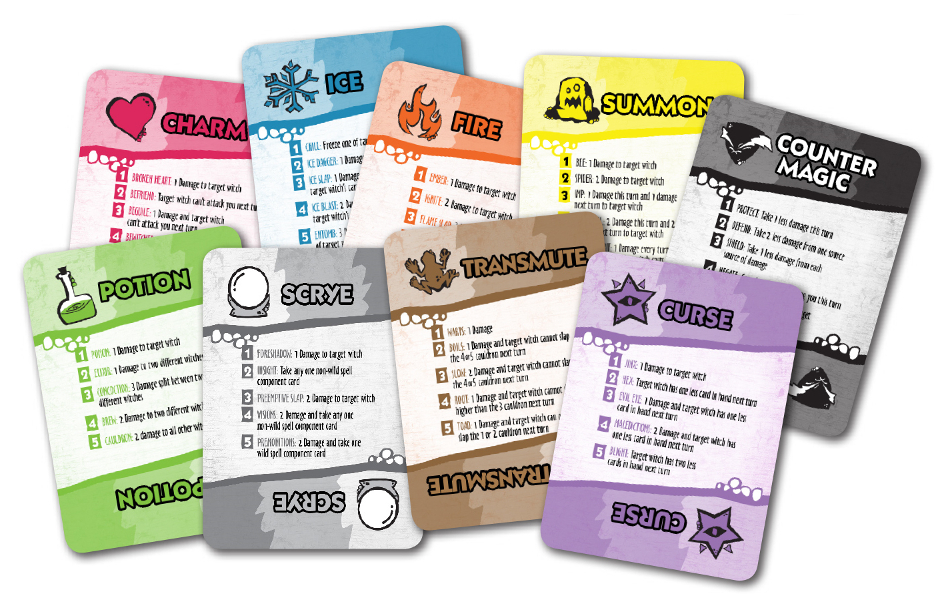 All spell effects are resolved at the same time, as is damage. If a player slapped a Cauldron that they cannot use, they suffer damage equal to the Cauldron value, along with any other spell effects that target them.

When a player reaches zero or less Life, they are out of the game.

Next Round and Winning the Game

The next round is identical to the first, except the dealer is the player with the least amount of Life. The winner of the game is the last player with a Witch who still has at least 1 Life point.

To learn more about Witch Slapped, visit the game publisher’s website or visit the Kickstarter campaign.

The Child Geeks spent most of their time laughing and yelling out, “OH, NO!” when they were unable to get the Cauldron card they wanted or were the target of a nasty spell. Which, as it turned out, was most of the time. You’d think that such disappointment would spoil game play, but you’d be wrong. According to one Child Geek, “This game is so fast and fun that you don’t have time to think about what you did wrong.” Another Child Geek said, “It’s OK when lots of people target you for spells because they will be the target the next time around. It’s a good thing not being the witch with the most health in this game.” As fast and as frantic as the games were, the Child Geeks were clearly playing their cards with a purpose and targeting other opponents with meaningful hits rather than random blows. When all the spells were cast and each player turned into a toad, they all happily approved Witch Slapped.

The Parent Geeks had the same amount of fun (if not slightly more) than the Child Geeks. According to one Parent Geek, “I really dig this game. It combines set collection – which I love – with speedy game play, which I am not familiar with but am really liking. As soon as one game is over, I want to play another.” Another Parent Geek said, “This is a great game to play with the family and with other adults. Plays fast and is a lot of fun. I really like how you can increase the damage and effects by taking your time and collecting more cards of a certain type.” It was the set collecting aspect of the game and how the more cards of a certain Spell type did different things that really pleased the Parent Geeks. Each hand was something new with interesting outcomes. When the games were over, the Parent Geeks approved the game.

The Gamer Geeks surprisingly enjoyed themselves. To a point where I had to remind them we had a bigger game to play and we needed to stop playing the card game. According to one Gamer Geek, “The set collecting is fine and the speed of the game is OK at best, but what really made the game interesting to me was all the different effects. I had to put a lot more thought into my cards than I originally thought. Do I go for big damage or do I protect myself this round? The game challenged me more than I thought and that really pleased me.” Another Gamer Geek said, “Fast and furious, that’s what this game is. But it’s also smart. You can’t just collect cards at random. You have to consider what you want to do and who to do it to. This is an excellent game filler and one I’d play it again.” When all the games were over, the Gamer Geeks approved Witch Slapped.

Now here is a game that you should not judge by its cover. Upon first glance, it looks to me a hybrid between Slap Jack and any set collecting game you care to mention. But look closer. The speed of the card passing forces players to make hard decisions quickly. The different types of Spells offers different types of outcomes. The number of cards you have for a Spell set changes the spell’s effect. But it all together and you have a game that is much more complicated than it first looks, but not so complicated that a child can’t play it and be competitive against an adult.

My only complaint is that there are a lot of different Spell card types. It’s difficult to quickly learn what does what, giving players who are familiar with the game a clear advantage over those who are playing it for the first time. But not such a strong advantage where the new player is clearly out of luck. Instead, knowing the game previously to playing it offers the more experienced player a deeper understanding of how the cards work. This will buy the experienced player seconds and make choices easier. And in this game, having a few extra seconds could mean the difference between a big Cauldron and a death spell.

Fast, fun, and furiously hilarious at times, Witch Slapped takes set collecting and pushes it to maximum overdrive. Lots off fantastic combos to explore and memorable moments to be had. Do try this game with family and friends when time allows. You might find it enchanting.