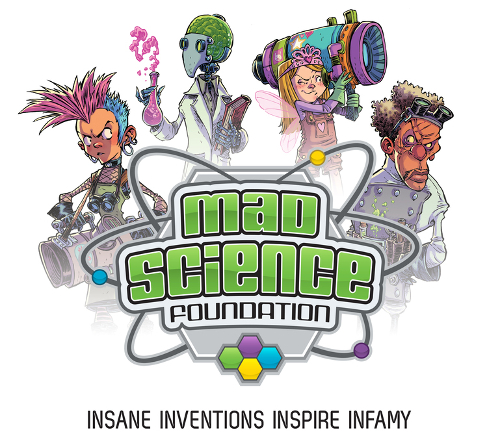 The line between madness and brilliance is sometimes thin. For example, Robert Oppenheimer is known as the “father of the atomic bomb”. He was a brilliant man, but his efforts lead to creating one of the most destructive weapons known to mankind. Is that madness? In this game, you play as a scientist that some say is as mad as Robert, but you just think yourself brilliant and misunderstood.

Mad Science Foundation, designed by Sharang Biswas, Max Seidman, and published by Cryptozoic Entertainment, is comprised of 1 Infamy track, 42 Scientific Resource cards, 5 Minion Resource cards, 6 Quirk cards, 4 Headquarters card, 30 Invention cards, 1 Sassy AI standee, 1 Crooked Director standee, 1 Truckload O’ Cash standee, 1 Spy standee, and 4 player markers. The cards are as thick and as durable as your standard playing card. The Infamy track and standees are made of solid cardboard. Artist Robb Mommaerts did a great job of capturing the oddness and the eccentricity of the different scientists and their love for big red buttons.

Welcome to the Lab

To set up the game, first shuffle the Quirk cards and deal 1 face-down to each player. Players should look a their cards, but should keep them hidden at this time. Any Quirk cards not dealt should be returned to the game box.

Second, shuffle the Headquarters cards and deal 1 face-up in front of each player. Players should orientate their card so it’s sideways, indicating it’s just a prototype. Any Headquarters cards not dealt should be returned to the game box.

Third, each player takes the player marker that matches their Headquarters card and places it on the “zero” space found on the Infamy track.

Fifth, from the Invention deck and add a number of Overworked Minions to it based on the number of players in the game.

Sixth, give the oldest player the Crooked Director standee and place the other standees to one side of the game playing area.

That’s it for game set up. Time to do some science!

Quirk cards give players a special mission. If they can achieve the requirements listed on their Quirk card, they will gain additional Infamy at the end of the game. Players should keep their Quirk cards hidden at all times, but they are welcome to look at them at anytime during the game. Doing what the Quirk card says is optional, but worth pursuing since the player with the most Infamy at the end of the game is the winner. 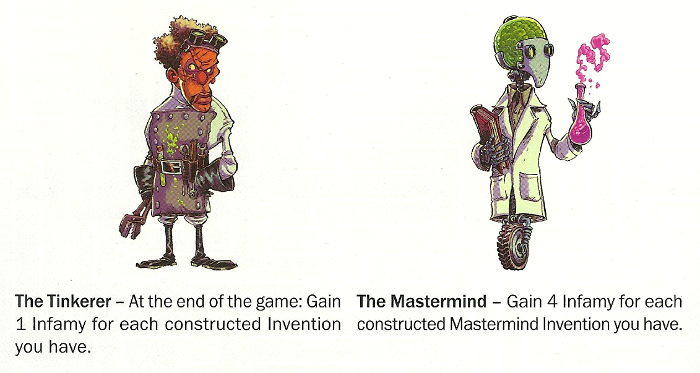 The World is Not Enough…

Mad Science Foundation is played in rounds with no set number of rounds per game. Each round has two phases. A single round of game play is summarized here.

The player who currently controls the Director reveals the top card from the Invention draw deck (or top 2 cards if the Overworked Researcher is in play) by flipping it over and placing it face-up for all to see.

Then the player who currently controls the Director draws and reveals a number of Resource cards from the Resource draw deck based on the number of players in the game. If any Minion cards are revealed during the card drawing, the card and matching standee is placed with the rest of the cards.

Once all the cards are revealed, the players who currently controls the Director organizes the cards into a number of piles equal to the number of players. The number of cards in each pile and type are up to the player organizing the piles, but they should carefully consider what and how many cards they are putting in each pile while they are at it. Failure to do so might cheat them of valuable cards.

Starting with the person directly left of the Director player, each player will take 1 pile of cards and any standees that are part of it. The player who made the piles will be the last to pick a pile and the only pile left to take is the one no one took. This is why it’s important for the player who is making the piles to carefully consider what they are creating.

Starting with the player who currently controls the Director, each player may construct and activate Invention cards in any order they like. 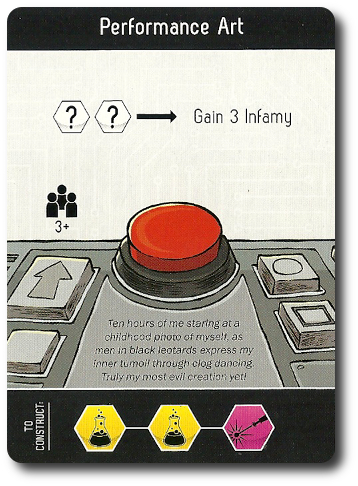 Resources come in four different types. These are Cryptomium, Lasers, Dark Matter, and Sharks. The amount of type of Resources the player has is public knowledge, meaning the Resource cards are always played face-up and organized in front of their owning player in whatever fashion they like. 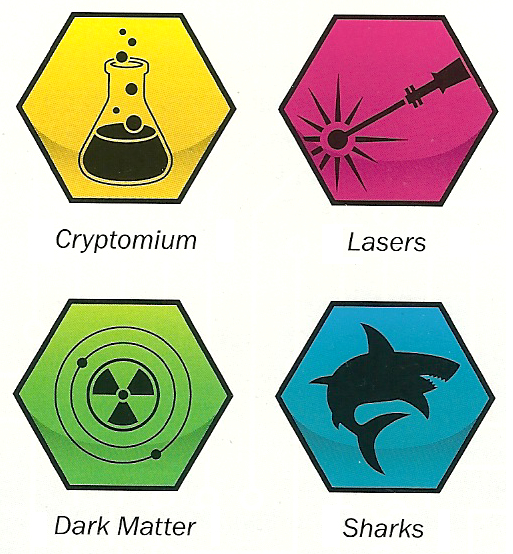 Minions can be found hidden in the Resource cards. Minions Include the Crooked Director, Truckload O’ Cash, a Sassy AI, a notorious Spy, and an Overworked Researcher. Each will help the player to a certain degree and may be required for specific actions. 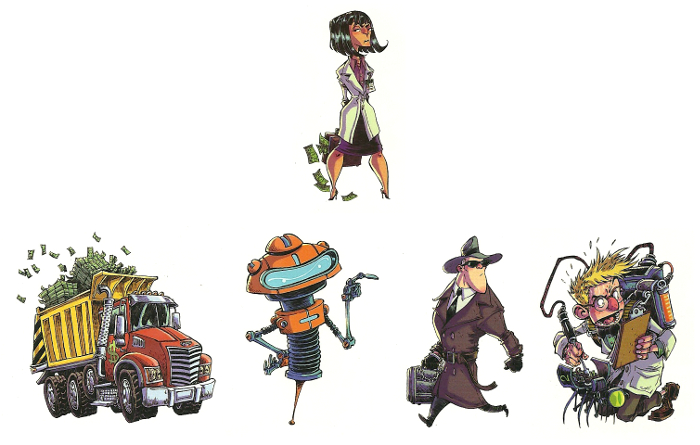 After each player completes their turn, the round is over and a new round now begins.

The game comes to an end when the last card in the Invention deck has been dealt. The round ends as normal and then the players reveal their Quirk card and adjust their Infamy score to reveal their final total. The player with the most Infamy wins the game!

The Child Geeks really enjoyed themselves, finding it entertaining to pretend they were pressing the BIG RED BUTTON on their constructed Invention cards, laughing like little mad scientists. According to one Child Geek, “The best part of the game is activating your Inventions in the best possible way to score big points.” In some ways, players build an engine that allows them to take additional actions and score Infamy each round. This was not lost on the more experienced Child Geeks who had played deck-building games in the past. But even more important, it piqued the interest of the less experienced Child Geeks who wanted to explore more games like Mad Science Foundation. The end result was universal approval by the Child Geeks who all found the game to be fast, fun, and challenging.

The Parent Geeks also enjoyed the game, both with their family and their peers. According to one Parent Geek, “I think the game is a good mix of resource collecting a deck-building, but you are not really deck-building. You are Invention constructing.” Another Parent Geek said, “I like how all the cards are visible in the game. I first thought this would make the game too easy and not very entertaining, but boy, was I wrong!” In fact, having all that information only served to make the game more intense as players knew exactly what their opponents were up to and capable of. Of course, having this knowledge heavily influenced pile selection and building, making each phase of each round an interesting exercise in taking action and reacting to other opponents. The Parent Geeks decided that Mad Science Foundation hit all the right buttons and voted to approve it.

The Gamer Geeks were skeptical at first, finding the game’s description and quick run-through of game play to be fairly simple. According to one Gamer Geek, “The game appears to be well made and the rules are tight, but it also appears to be really light. I’m not sure this game will be welcomed at the elitist’s table.” After playing it, the Gamer Geeks started to change their mind. One Gamer Geek said, “I wasn’t sure this game would be up to the task, but I was wrong. There is a great mix of tactics and strategy to play with, as well as resource collecting and specific player powers with the Minions. It all works very well.” Another Gamer Geek said, “It’s a light game, but has enough meat to fill me up. I think this is a perfect filler game or a great choice for a lighter game night.” When the votes were in, the Gamer Geeks were pleased to approve Mad Science Foundation.

The game was a wonderful surprise. When I first read the rules I wasn’t certain the game could pull off so many little side game mechanics and bring it all together. The resource building, engine building, card drafting, and variable player powers are all game mechanics that have been used before, but when you start to combine them, the connections between the different game aspects can feel muddled. Or even worse, forced. Not the case here. Everything works really smoothly and feels like part of the natural progression of the game.

I also wasn’t certain I would enjoy a game that forced me to show what I was collecting, but this turned out not to be the case. In fact, it served to be just the opposite. By knowing what my opponents had and were working on, I knew exactly where I needed to focus my attention and what risks to take. This was especially true when I was the Director and I divided up the resources in such a way so as to ensure that no one player had a solid hand. Didn’t always work, of course, but the game gives the players a lot of information and just enough ability to use it to make each decision meaningful.

I really enjoyed this little game, finding it to be just the right mix of entertainment and challenge. While it played brilliantly with families, it also did very well on the gaming elitist’s table, making everyone happy. Give the game a try and see if it makes you happy, too.