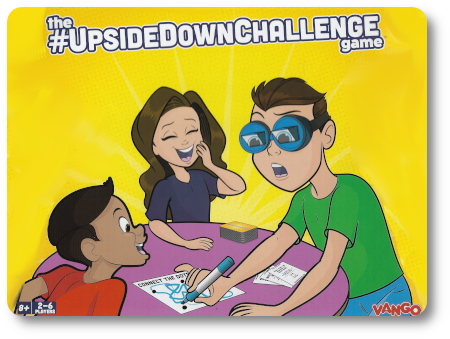 Roman emperor and Stoic philosopher, Marcus Aurelius, said, “Everything that happens, happens as it should, and if you observe carefully, you will find this to be so.” In this game, what you observe everyday is turned – literally – upside down. The sky is at your feet, the table is hanging from the ceiling, and left is most certainly right. Prepare to enter a world where even the easiest of tasks like writing a word becomes a legendary chore. It’ll be challenging, to say the least, but to win you only need to observe your new temporary reality with its wacky flip-flopped rules.

The #UpsideDownChallenge Game, published by Vango, is comprised of one pair of Upside Down goggles, one drawing pad, and 30 Challenge cards (five of which are left blank for the game owner to provide their unique twist on the game). The goggles are high quality, made of thick plastic with durable nylon adjustable strap. The Challenge cards are as thick and as durable as your standard playing card. The drawing pad is made of exceedingly thin paper, almost being of the same thickness as the cheapest single-ply toilet paper you can think of. It does the trick, but you’ll want to use your own pads of paper. Not included with the game, but necessary to play, is a pen or a pencil. Players will also need a time-tracking device. I suggest you use your smartphone’s built-in timer.

Getting Ready to Flip Your Reality

To set up the game, first shuffle the Challenge cards and set them in the middle of the playing area, face-down.

Second, determine who will be the first player and hand them the goggles.

That’s it for the game set up—time to see if you can live in a world that is upside down.

Up is Down; Down is Up

The #UpsideDownChallenge Game is played in rounds and turns with no set number of rounds per game. When playing for the first time, any player can draw the first Challenge card. They read it out loud and attempt to complete it while wearing the goggles.

There are several different types of challenges. Some only require a player to draw an object or write a word. There are a few physical challenges, as well, that include pouring water from one cup to another, fist-bumping the player to your left (on the first try), and even running through an obstacle course. Some of the challenges require the player to complete the task within a certain amount of time. 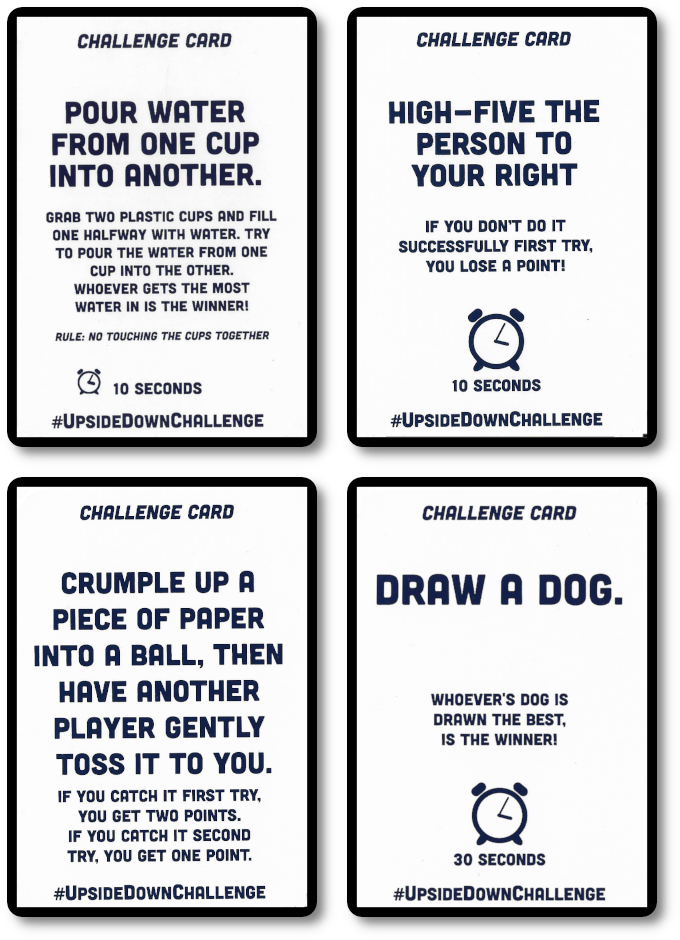 Most of the tasks are very straightforward and self-explanatory. When completing the tasks, the players are expected to follow a simple set of rules:

If the player completes the task, they get the number of points indicated on the Challenge card. The next player in the turn order sequence now attempts to complete the challenge by wearing the goggles and following the same rules. If the Challenge card only awards points to one player, the group votes on who should get it based on the results of everyone’s attempt at the end of the round.

Once every player has had a chance to attempt to complete the challenge and points are earned, the round is over. A new round then begins by drawing a new Challenge card.

The game continues, with players taking turns attempting to complete the same challenge each round, unit one player has earned five or more points. The first player to do so is the winner!

To learn more about The #UpsideDownChallenge Game, visit the game’s webpage.

The Child Geeks enjoyed the game but enjoyed playing with the goggles even more. According to one Child Geek, “The game is fun, and I like seeing how the other players keep messing up. It’s really funny! But I like playing with the goggles more and just walking outside with them. It’s like being in a different world where the sky is down.” Another Child Geek said, “Even the simplest of things like drawing a tree feels really hard. But you get used to it. I can now walk all around the house with the goggles on, but my mom tells me to stay away from the stairs.” Yikes! When all the votes were in, the Child Geeks gave The #UpsideDownChallenge Game a thumbs-up… or is it down … Whatever. They liked it.

The Parent Geeks found the game to be entertaining and funny, suggesting it was a pleasant distraction that generated several chuckles and grunts of frustration. According to one Parent Geek, “Games like this are perfect for just unwinding with the family around the table. After a hard day of just being at home, it’s nice to take on the world from a different perspective.” Another Parent Geek said, “A delightful little game that gave me a headache. Those goggles really messed with my eyes. Thankfully you don’t have to wear them very long.” When the final challenge was completed, and the points all counted, the Parent Geeks gave The #UpsideDownChallenge Game their full approval, finding it to be good family fun.

The Gamer Geeks found the game to be absolute rubbish but enjoyed the goggles. According to one Gamer Geek, “The game is junk. You could have the same game with just wearing blindfolds or having everyone take a lot of shots of really strong and cheap alcohol. Of course, the goggles meet you half-way, I suppose, but the real joy here is wearing the goggles and watching others make asses out of themselves.” Another Gamer Geek said, “Not a Gamer Geek’s game. Not by a long shot. Great for families, though, and I know my kids love the goggles. I like them, too. They make everything look pretty strange. A bit trippy and disconcerting, to be frank.” All the Gamer Geeks rejected The #UpsideDownChallenge Game, but everyone liked those goggles.

The #UpsideDownChallenge Game is the kind of fun only a family or kids are going to enjoy. It’s a game meant to entertain a group around the family table, and I believe it does its job pretty well. The goggles make each activity different, but not overly complicated. The biggest non-starter is going to be for those who wear glasses that correct poor eyesight. The goggles do not allow players to wear glasses, essentially giving everyone who does not wear glasses a considerable advantage. Sort of. Perfect vision is not a game-changer here.

Not that it matters, as this is a ridiculous game.

In case you were wondering, the game’s title – which is a hashtag – is intended for social media sharing. The game rules and the five blank cards explicitly state the game publisher’s desire for you to share your thoughts using the hashtag, which is also the game’s title. Fun bit of marketing creativity there, I must say. 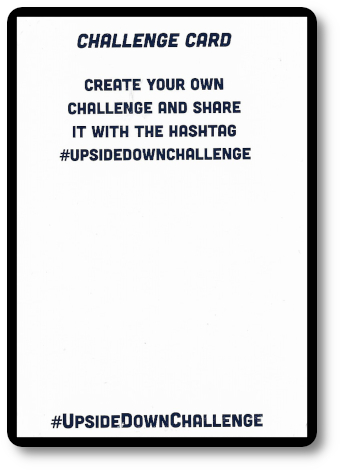 Overall, The #UpsideDownChallenge Game is one you’ll enjoy and most likely forget. The goggles, however, are going to live on and be enjoyed by the kids for much longer and well away from the gaming table. It’s fascinating to see the world upside down and even more attractive to observe how the simplest of activities suddenly turn into difficult tasks. I had my youngest try on the goggles before we played the game to see how debilitating they would indeed be. He could barely walk down the hall. That said, the human brain is an incredible thinking machine. The longer you play the game, the easier it is for the player to correct their actions.

Also, they make you look like a mad scientist that is slightly cross-eyed. Total win, I suppose. 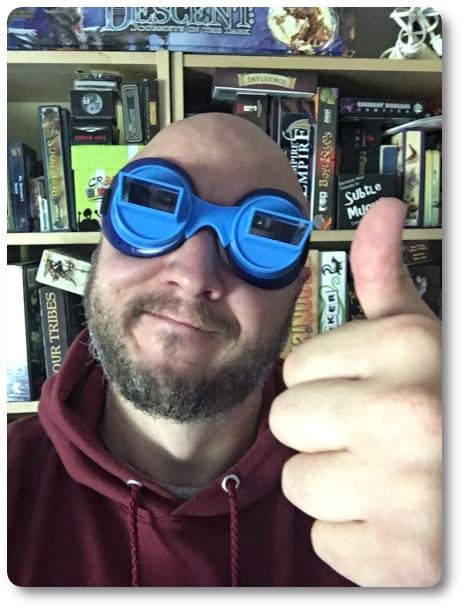 Should you get this game? If you have younger Child Geeks, I think you’re going to enjoy yourself. For the family, the game is going to be a pleasant and enjoyable experience, as well, regardless of the age range. For you, elitist Gamer Geeks, do as one of your peers suggested and avoid it. Or don’t. During the time of COVID, everything is upside down. You might find that a game you wouldn’t consider in a thousand years is exactly what you need now in this crazy upside down time we find ourselves in.