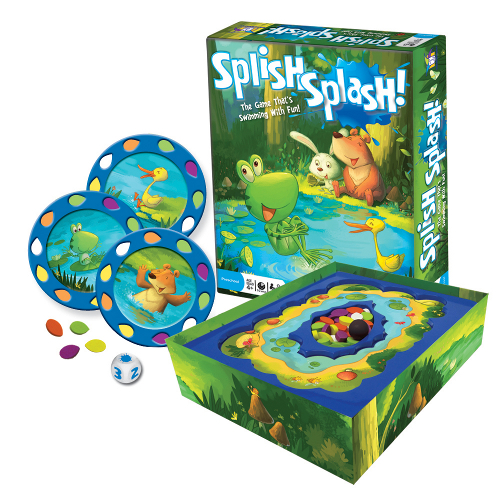 What could be better on a hot day than a quick dip in the pool or a nearby pond? NOTHING! Recreate the fun of a hot summer’s day playing in the water with Splish Splash! as you and the other players attempt to make the biggest splash in the pond! Fun and chaos will ensue, but hidden underneath the surface of this kids game is a surprisingly entertaining experience for the entire family!

Splish Splash! is comprised of 50 wooden water droplets of different colors, 4 player boards, 1 custom six-sided game die, 1 wooden pebble, and 1 game board. The game board stays in the box and has a small “pond” cup in the middle that holds the wooden droplets. All the game components are of high quality and very colorful, which is typical of Gamewright’s games and what I’ve come to expect from their products.

On a player’s turn, they will roll the custom six-sided die. The die result determines what action the player will take on their turn and how many times.

If wooden water droplets splash out of the “pond”, the player collects these and attempts to match the color to an open space on their playing board. If it does match, they place the wooden droplet on the matching space, covering it. The player does this for all the water droplets that splash out.

If the water droplets do not match an uncovered space on the player board, they are simply returned to the “pond”.

The game continues with the next player to the left retrieving the wooden pebble and rolling the die.

To learn more about the game and to read the complete rules, see the game’s official web site.

My little geeks have always enjoyed action/dexterity games such as Angry Birds: Knock On Wood and Knock Your Blocks Off. Such games allow the player to be much more active while playing a game then the traditional card and board games that more or less require to player to “stay put”. Staying still can be difficult for little geeks as they are mostly just a little ball of pent up energy always on the verge of exploding. The additional level of activity also makes the game much more interactive and almost always makes the players focus in and pay more attention.

My only real concern about the game is the wooden pebble. Or, to be more specific, how much damage the wooden pebble will cause. That little pebble is solid and I just know, without having access to a crystal ball or being imbued with mystical powers, that my little geeks are going to whip that thing at the game board the first chance they get. This is despite any words of warning, threats (real or imaginary), or legal and monetary consequences I might impose to help them remember to not do so.

I demonstrated the correct way to drop the pebble  to my little geeks. This was done by me explaining in my “Dad Voice”, as my little geeks like to say, that the pebble is dropped at least 1 foot about the game board. I gave them the option of dropping it higher if they wanted, but they always had to drop it and let gravity do the work. I gave each of them several tries so they could get a feel of the level of difficulty and the results of a good pebble drop. This turned out to be  a great deal of fun and we kind of forgot about playing the game for a little bit as a result.

Once everyone had enough tries to feel comfortable dropping the pebble into the “pond” and I answered any questions they might have had, it was time to play the game! While I set up the play area, I asked all the players their thoughts on the game.

“Looks like a little kid game, but I like how I get to drop the pebble into the pond and make it explode.” ~ Liam (age 7)

“I like the pretty colors and how the game teaches color matching.” ~ Nana (i.e. “Grandma”)

Most excellent. Looks like the early opinions of the game are all positive and all the players are ready to jump in! Let’s the see if the game is as fun as it looks or if it will leave us all wet and disappointed.

First off, no one lost an eye or damaged property playing the game. Everyone dropped the wooden pebble correctly and I was most pleased that I didn’t have to remind any of the players about this rule. This might be the result of my little geeks being the smartest people on the planet or that fact that I really labored the point.

For the first game, my little geeks found out that the higher the pebble is dropped, the more droplets will splash out. However, the higher you go, the harder it becomes to hit the “pond”. An unexpected game twist was the increased level of difficulty as the game progressed. This was the result of wooden water droplets being removed from the “pond” once collected by the players. This left less droplets to splash out making it all the more important to drop the pebble in just the right spot.

The game was a lot of fun to play and was pretty chaotic. Everyone cheered when there was a big splash of wooden water droplets and then quickly scrambled to collect them all. After the first game, we tried the game variants that allowed the player to toss the wooden pebble instead of dropping it. We also played with the game variant that stopped a player’s turn once they splashed out at least one wooden water droplet. This turned out to be the perfect combo and make the game all the more challenging and fun. We now spent less time picking up after each player’s turn and more time focusing on getting the wooden pebble just right. This turned a simple game of color matching into an intellectual exercise of physics. A player could now influence the wooden pebbles trajectory and speed to maximize wooden water droplet splashing. We all agreed that the best way to play the game was using these game variants and continue to play with them to this day. 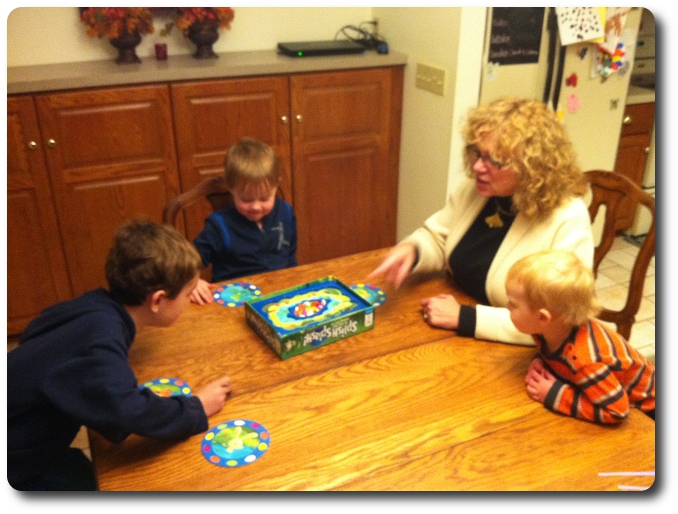 The game was fun for all the players and even caught the attention of my 2-year-old!

Gamer Geeks, this is a kids game. This statement should be enough to make you look elsewhere for a game to play, but don’t walk away yet. While the game is exceptionally simple, it’s also an excellent exercise in hand/eye coordination and dexterity. I found it to be a challenging and worthwhile game experience when we started tossing the wooden pebble and was just as frustrated and as excited as my little geeks throughout as I became personally invested in each toss. Clearly not a “gamer’s game”, but a fun game all the same. Splish Splash is only rejected from a Gamer Geek’s perspective because of the game’s lack of depth. Like I said, it’s a kids game, but it’s a fun one and you’ll enjoy playing it with your little geeks.

Parent Geeks, other than the game’s choking hazards, this is a fantastic game for the family. Your little geeks will get to work on their color matching and recognition as they cover up their player board giving you an opportunity to ask them to name and identify colors. You can also use the game as an excellent opportunity to discuss cause and effect and introduce them to the wonderful world of physics!

Child Geeks, this is an excellent game that will challenge and entertain you as you attempt to make the biggest splash at the table! The game is very much luck based, so don’t get frustrated if you don’t get the wooden water droplet color you need to win the game. When you are playing, imagine you are jumping into a pond and splashing all the rest of the players! In no time you and everyone else at the table will be laughing and cheering for all the players!

Gamewright Games has released yet another wonderful game the entire family can play. It is exceptionally gratifying to be able to play games with my little geeks that I also find to be entertaining. My only negative  comment about this game is it is only for four players, and here’s why. The game draws a crowd. Whenever we play it, people always approach to see what all the noise is about. A true testament to how much fun the players are having, but also unfortunate that it does not sit more. Hardly a “big issue” and nothing that should stop anyone from trying the game. In fact, my negative comment is really something of a positive endorsement.

Splish Splash is much fun and can be set up and played multiple times very quickly. It’s challenging and engaging without being heavy or complex. The game’s visual and tactile appeal should be immediately apparent as the wooden water droplets spray out and have all the player’s scrambling to put them back in the “pond” as quickly as possible so they can have another turn! I have no doubt you and your family will enjoy Splish Splash! for many, many games to come. I know we certainly do!