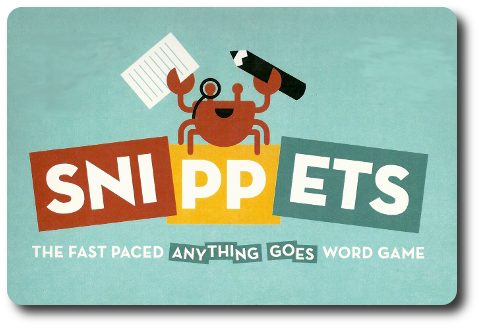 The English language is difficult to learn because it’s something of a hodgepodge of other languages thrown together, blended, poured into a big cultural glass, and served with a small umbrella. Many words that we consider to be “English” are actually words from other languages. In this game,  you’ll be asked to create words from small snippets. You’d think that would be easy, but not always.

Snippets, designed by Shaun Salzberg and to be published by The Master Theorem Games, will reportedly be comprised of 4 Answer pads, 4 pencils, 250 Snippet cards, and 1 sand timer. As this is a review of a prepublished game, I cannot comment on the game component quality.

To set up the game, first give each player 1 Answer pad and a pencil

Second, shuffle the Snippet cards and place them face-down in the middle of the playing area. This is the Snippet draw deck for the duration of the game.

Third, place the sand timer next to the draw deck.

That’s it for game set up. Time to test your vocabulary skills.

From a Snip, a Snippet

To begin the game, one player draws the top-most card from the Snippet draw deck and places it face-up where all the players can see it. Another player should turn the sand timer over to start the clock as soon as the Snippet card is revealed. 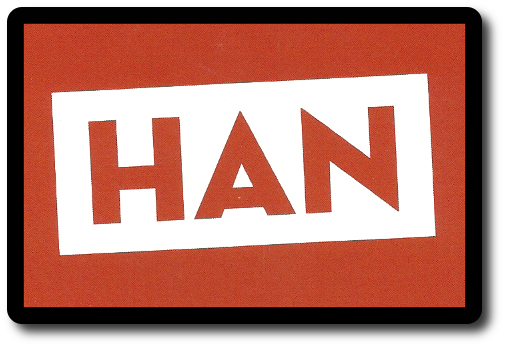 Yes, he shot first. Let’s all move on…

The players now have about 60 seconds (sand timers are not consecutively accurate) to create as many words as possible using the letters displayed on the Snippet card. Of course, there are rules to be followed, but the rules are not limiting.

Using the example “HAN” Snippet card, all the following would be considered legit.

When the sand timer has run out, all players put down their pencils share their words one player at a time. All other players should listen to the words and either indicate that the word said is not legit or was also included by them.

How are words not legit? If an opponent wants to challenge a word, they can. The player must then prove that the word exists (use a smartphone here). The group votes if the word should be stricken from the lists or kept in play. Or the player could have incorrectly used the Snippet letters by either rearranging them or not including all of them together. In which case, the word is not valid.

For every word not challenged or duplicated by another opponent, they earn +1 point. Then the next player goes repeating the process of sharing their words. This continues until all players have collected and recorded their points for the round.

Creativity is its Own Reward

The player with the fewest crossed out words (those not duplicated by opponents) earns a bonus creativity award for the round that is equal to +3 points. Long and archaic words usually win, which means you won’t have a chance to ever get the creativity bonus points if you are playing with a research scientist of English professor.

The player with the longest words (count the letters here) will get the bonus braniac award that are also worth +3 points.

Some Snippet cards will have a special bonus on them which describe a condition that, if met, awards even more points. 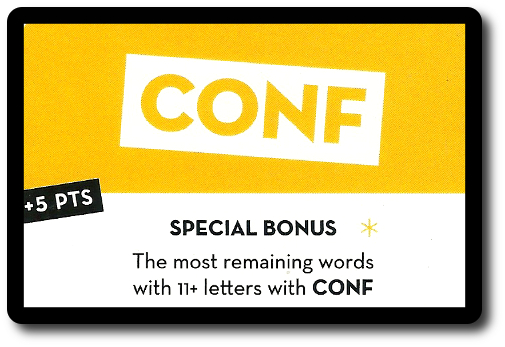 The player who has earned the most points at the end of the round is given the Snippet card as a trophy. A new round now begins by drawing a new Snippet card and getting creative.

The first player to collect 3 Snippet cards wins the game!

To learn more about Snippets, visit the game publisher’s website or visit the Kickstarter campaign.

The Child Geeks were lukewarm to the entire game, having played vocabulary and spelling games in the past. According to one Child Geek, “If you don’t know how to spell as well as your opponents or don’t know a lot of words, you’ll never win.” The same could be said about Trivia games, but games with spelling involved always tend to touch a certain chord with the younger gamers. Another Gamer Geek said, “This game is only good if you play it with players who are  your same age or grade. Then everyone is starting at the same place and have no real advantages.” Needless to say, the Child Geeks didn’t mind playing the game with just their peer group (and within their own age/school grade group) and disliked Snippets immensely when playing it with their Parent Geeks. The end result was a game that was given a loose thumbs-up by the Child Geeks that ultimately lead to a mixed level of approval.

The Parent Geeks found Snippets to be a lot of fun and very creative. They quickly saw that earning points was one part vocabulary and one part creativity. This mix of the two worked well and entertained the Parent Geeks from start to finish. According to one Parent Geek, “I like the game. It challenges me to think fast and then come up with creative ways to play off the words I already have.” In fact, the Parent Geeks found writing a list of words to be a big help when it came to coming up with new words. As one Parent Geek put it, “Having the words in front of me helps me remember new words.” When all the games were over, the Parent Geeks voted to approve the game, but not as a family game. They, too, found that Snippets could be very frustrating if played with younger aged Child Geeks.

The Gamer Geeks found Snippets to be fairly bland, noting that the game play was repetitive, the game’s idea was based too much off of other spelling and vocabulary games, and didn’t do much to entertain. According to one Gamer Geek, “The game’s concept is sound but it doesn’t reach to do more than just be yet another spelling and vocabulary game. These are getting boring and its a boring genre. The game designer should have done more to spice it up.” Another Gamer Geek said, “Kind of snore, really. Everything is obvious, the player who wins is always the one with the biggest vocabulary, and there are no real rules to confine the crazy words players come up with. I’ve won two games on words that don’t even exist, but no one challenged me on them.” In the end, the Gamer Geeks voted to reject Snippets.

Snippets is a game that swims in a very small pond with many other similar games. It’s hard to standout in a crowd like that. Nevertheless, Snippets does its job and delivers a game that is both challenging and fun to play. The limited time to be creative keeps everyone on their toes, but the near endless possibilities given to the players to be as creative as they want also adds a lot of territory to explore. The end result is a very short runway that happens to be miles and miles wide. Creates for some interesting words and game play.

Overall, I was neither impressed or disappointed with the game. While I would not go so far as to agree with the Gamer Geeks’ that the game is bland, it doesn’t really bring much that is new to the table. Understand, of course, I say this from the perspective of someone who has played many, many games. For someone who hasn’t, Snippets is sure to challenge their ideas of what a typical vocabulary and spelling puzzle game could be. If you are such an individual, I encourage you to try Snippets the first change you get. For everyone else, expect a solid game that does little to break new ground.