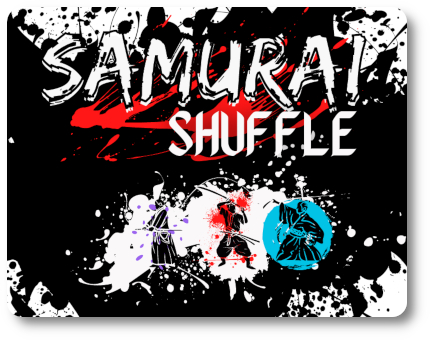 Japanese-born American cartoonist and comic book creator, best known for the comic series Usagi Yojimbo, Stan Saki said, “A samurai should always be prepared for death – whether his own or someone else’s.” When the sword is drawn, there are no more words to speak. Each warrior must live in the moment and the next simultaneously, for both could by their last. So draw your sword, warrior, and may the best – or luckiest – among you be victorious.

Samurai Shuffle, designed by Derek Saenz and published by Toga Pig Games, is comprised of 31 cards, two small cubes (one black and one white), and two Wound tokens. The cards are as thick and as durable as your standard playing card. The game is very compact and comes in a small “mint tin” box that can easily fit in your back pocket. Of course, if you decide to store it in the back of your pants, expect people around you to ask you for a mint – constantly. They’ll be disappointed when they learn you don’t have a mint to give, but this type of engagement works excellent for getting folks to play the game with you.

First, find and remove Combo, Turn, and Setup cards. Set them aside.

Second, separate the remaining cards by the card’s back color (black and white), giving each player all of the cards of one specific color and the cube that matches the color of their cards.

Third, place the Setup card in the middle of the playing area and flip it, so the card’s face shows the sparing mat. Have each player place their cube in the middle space directly in front of them. Set the wound tokens to one side. 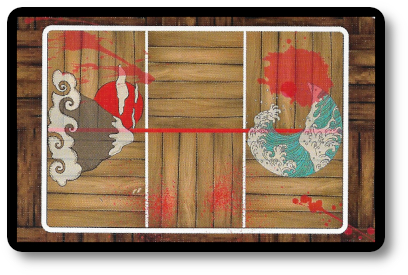 Fourth, have each player find and set aside the Focus cards and then shuffle the remaining cards together. Set this deck of cards face-down. This is the player’s draw deck. Have each player draw the top three cards from their draw deck and add the two Focus cards set aside. Each player should now have five cards in their hand.

That’s it for game setup. Time to duel!

The Way of the Warrior

Samarai Shuffle is played in rounds, with each player participating in the round simultaneously. A round of gameplay is summarized here.

Both players draw one card from their draw deck and add it to their hand. If players don’t have any cards to draw, they disregard this step.

Players now look at the cards in their hand and play two in front of them, face-down. The cards represent basic attacks, blocks, and maneuvers.

Both players now reveal one of their two face-down cards (player’s choice). These two cards are now resolved.

This card allows the player to inflict one wound on the opponent but only if the opponent’s cube is in a space directly adjacent to their cube (players cannot attack diagonally). 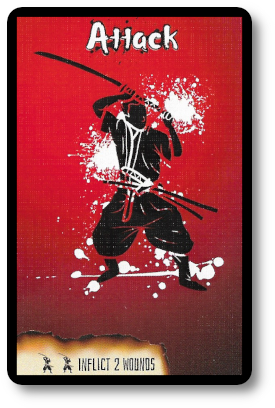 This card allows the player to block one Attack from an opponent’s adjacent cube, thus canceling any possible wounds. 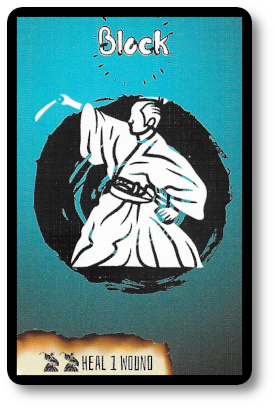 This card allows the player to take one card from their discard pile and shuffle it into their draw deck. 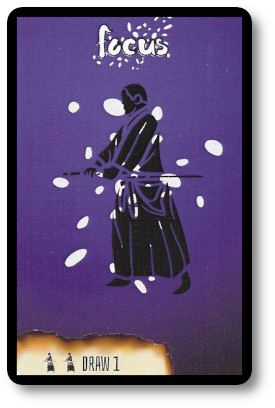 This card allows the player to move their cube on the sparing floor towards the Ocean or Mountain space by one. There is a red line down the middle of the card. This defines a boundary that neither player’s cube may cross. Thematically, the player’s fighter is shifting left and right. 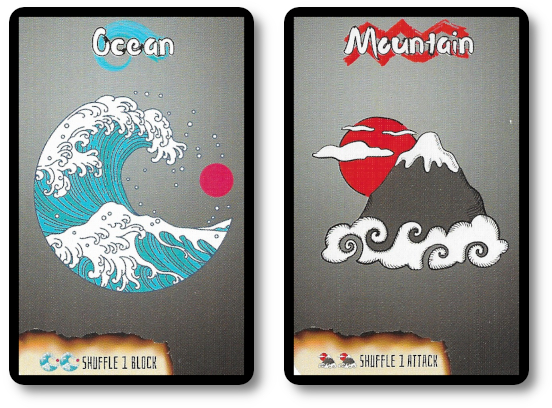 Players now repeat what they completed in step three; however, there is a chance that players have revealed a combo. A combo is any two of the same card.

This combo allows the player to inflict two wounds instead of one on their second Attack.

This combo allows the player to heal one wound after blocking any attack.

This combo allows the player to draw one additional card after shuffling a card back into their draw deck.

This combo allows the player to take one Attack card in their discard pile and shuffle it into their draw deck after shifting their cube.

This combo allows the player to take one Block card in their discard pile and shuffle it into their draw deck after shifting their cube.

Players now discard the cards they played to their discard pile. Focus cards, if used, are returned to the player’s hand.

That’ completes the round! Then, another round begins starting with step one noted above.

The game continues until one player takes two or more wounds during the round. This player’s warrior has been beaten and leaves the sparing mat with their face downcast or dragged off due to being dead. The other player’s warrior has proven their prowess and is declared the winner.

To learn more about Samauri Shuffle, visit the game’s webpage.

The Child Geeks immediately understood and enjoyed the game, finding it fast and furious! According to one Child Geek, “The game is really exciting! You never know what your opponent will play, but you can try to figure it out. When you score a hit, you feel like a real samurai!” Another Child Geek said, “I thought it would be like Rock-Paper-Scissors at first, but you start to think it is a real sword fight when you play. I really liked it.” All the Child Geeks thought the game’s speed, depth, and challenge were perfectly matched to its theme and were always eager to play it again when the game was over. This resulted in, with no surprise, the game being fully approved by the Child Geeks.

The Parent Geeks also enjoyed the game, remarking how fun it was to play and how easy it was to transport in their pocket. According to one Parent Geek, “Small games sometimes tend to leave little in the way of a rememberable impression. That is not the case for this game. It fits in a small tin like you’d find normally holding mints, but this tin is holding a really fun game. I took it to a pub and the office. I’ve played it in meeting rooms and on the family table, on hightops, and on the floor in the family room. Wherever we played it, we enjoyed it.” Another Parent Geek said, “Fast and brutal, the game makes you feel like you are in a real match, and you have to watch your step. One slip-up will put you in the hurt bag for sure. Great little game.” When the swords were sheathed, the Parent Geeks bowed reverently to Samuari Shuffle, giving it the respect and admiration they believed it deserved.

The Gamer Geeks thought differently. Which is not to say they didn’t enjoy the game. They did, indeed, remark several times how they were enjoying themselves, but never to the level of excitement shown by the Parent and Child Geeks. According to one Gamer Geek, “A good game. I like how there are elements of memory and deduction, but there is also a lot of luck. A bit too much luck for me at times, but I don’t think that takes away from the game. It does stop it from being truly great. It’s fun, and I think that’s enough.” Another Gamer Geek said, “A neat attempt to capture the brutality and swiftness of a real sword fight, asking the players to think two steps ahead and suffer the consequences if they didn’t think right. I found the game entertaining.” After the final battle, the Gamer Geeks believed the game put up a good fight but were mixed on the overall level of endorsement.

Samurai Shuffle is fast and to the point. It’s great to bring with you to the pub, your favorite local restaurant, or have in your bag when you want to play a game with a friend. It takes very little space and provides enough engagement for the two players to make it worthwhile. All of our players enjoyed the game, but the level of enjoyment is based on what you are looking to get out of it.

The Child Geeks were looking for a fast game with exciting twists and turns.

The Parent Geeks were looking for a casual game they could play with little effort and enjoy themselves a great deal.

The Gamer Geeks were looking for a game that required forethought, strategy, tactics, and engagement.

Here Samurai Shuffle falls short, but not by much.

You have to think ahead and deduce what your opponent has played. Memorizing cards would help here, but it’s not worth the effort due to the game’s length of play. The game also requires you to think tactically if you want to get those combos out the door while at the same time defending your fighter from the onslaught of sword blows aimed at their head. The game is engaging; as a result, rewarding the player who leans in, takes notice, and plays accordingly.

Strategically, the game isn’t much to speak about. Outcomes are still based on luck, and even the most brutal and most decisive blow can be easily deflected if the right card is in play. It can feel deflating to set up a masterful combo only to have it lightly turned to the side at the last moment by a simple card. This is what stopped the Gamer Geeks from gushing but didn’t seem to bother the Child and Parent Geeks whatsoever.

If you are looking for a game that requires thinking, tactical maneuvering, and deduction, you need to get Samurai Shuffle to your table. And due to its petite size, you can forgo your table and take it on the go. Do try this little game when time permits.