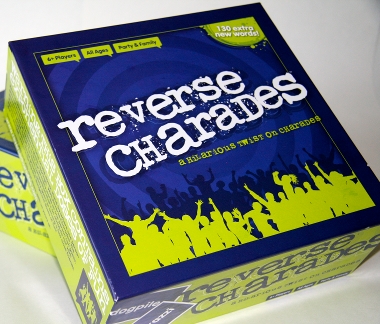 Reverse Charades is a new take on the classic acting and guessing game from which it derives its title. All the same rules are here, which is to say that none of the players can speak or mouth out words. Pointing to objects in the room, including other players, is permitted. In all cases, the game invites you to invent your own rules where and when needed. And while none of this should sound new to you, there is a very important aspect of this game that makes it unique.

In the classic game of Charades, one player is the “actor” while the other players work together to determine what is being pantomimed. The reverse is true for this game. Instead of a single actor and multiple guessers, the roles are flipped and there is only one guesser per team while the rest of the team become the actors. In this way, the classic game of Charades is elevated to a new level of chaos, hilarity, and cooperative play.

The rules of the game are very straight forward. Divide the players into equal teams, determine how many points wins the game, and then select which member of each team will be the first guesser. On a team’s turn, one of the opposing team members holds up the word cards for the actors to see and starts a 60-second egg timer. As soon as the timer is started, the fun begins.

Each team’s goal is to have the guesser correctly name as many word cards as possible within the given 60-second limit. The opposite team keeps track of the points and provides new cards when the word is correctly guessed. Each team gets one “skip” of any card of their choice per guessing round, but only one.

One point is earned per correctly guessed word. In contrast, one point is lost if any words or noises are made or mouthed by any of the actors. When one team has a earned points equal to or greater than the predetermined number of points necessary to win the game, a winner is declared and goes on to rule the world with an iron fist. Total game play time is variable, but can be shortened or lengthened by adjusting the number of points necessary to win the game.

The game easily accommodates large groups and age ranges. Rules are very straight forward and provided documentation is a fun read. A bit of tongue and cheek is employed in the rules and game description to help keep the mood of the game light and fun. The word cards are double sided, bright and easy to read, and provide literally hundreds of guessing words to play with.

In addition to what you get in the box, the publishers also plan on providing free downloadable content from their web site to support and expand the game.

I like to count myself something of a veteran when it comes to games, as I have many, many hours of table time under my ever expanding belt and can roll the dice with the best of them. Complex resource management games and in-depth strategic and tactical games are no stranger to me. And yet, I am frightfully unskilled in the party game department. I believe this to be the direct result of my lack of interest in throwing parties in general. Something about multiple people using my household plumbing has always made me a bit skittish…

While I am no “expert” on the party game genre,  I can tell you with absolute confidence that which I like and what plays well with my family.

Reverse Charades does an outstanding job of keeping everyone entertained and engaged. I’ve played Charades before and enjoyed it, but Reverse Charades provides an entirely different and more enjoyable experience. I attribute the higher level of enjoyment squarely on the cooperative play aspect. Playing off each other, adjusting to other player’s interpretation of the word to be guessed, and then laughing as a group filled me with a great sense of accomplishment and satisfaction.

Best of all, the kids can join in the fun even if they don’t know how to read. A simple house rule we employed was the “pausing” of the 60-second timer (that is, tilted sideways) and the words whispered to the younger players so they knew what to act out. This worked brilliantly and my two oldest sons were in the mix and acting out the words with as much vigor as the adults.

This game also introduces a new geek skill, Cooperative & Team Play. Many children’s games keep the rules simple and the interaction between players limited in order to reduce game complexity. This is an excellent course of action and one that slowly changes as you begin to play more complex games. In Reverse Charades, your young little geeks will be part of a team and must play with others on a cooperative level in order to succeed. If you have kids, I don’t need to remind you how important cooperative play is on the playground and in the home.

Active listening and communication skills are also taught in this game, along with reading. But, again, knowing how to read is not a prerequisite. To a much lesser extent, writing (keeping track of the scores) and simple math (adding and subtracting from the score) are also used.

All in all, I really like this game and it will be making an appearance on the rare occasion I have people over to my house for a party. This is a no brainer for my family and my little geeks love to ham it up, act crazy, and then see Mom and Dad do the same. If you are looking for a new family or party game, Reverse Charades would be an excellent addition to your game collection. You can purchase the game via PayPal from the game publisher’s web site.