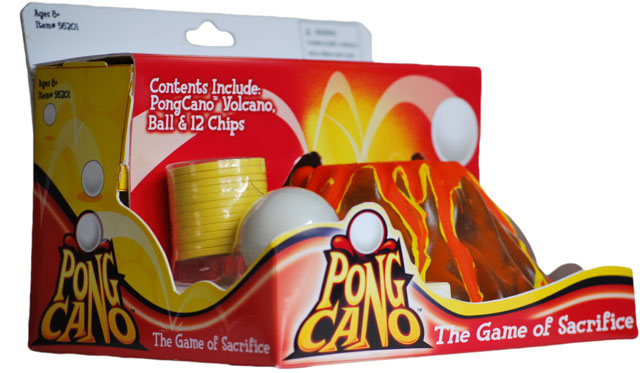 In PongCano: The Game of Sacrifice…to a plastic volcano, players race to be the first to collect all the PongCano chips, but such an easy task is anything but. Players must bounce a ping-pong ball into a volcano with a small opening in order to claim their prize. Do it correctly, and victory is yours! Skill, a steady hand, and a cool head will win the day, but having a lot of luck certainly wouldn’t hurt either.

PangCano is comprised of a plastic Volcano cup, a ping-pong ball, and 12 PongCano chips (roughly the same size but thicker than a standard Poker chip). All the parts are solid and durable plastic. The Volcano cup has lava spewing forth from it, which is a nice touch. The end result is a game made of quality components that is visually appealing.

PongCano needs to be played in a space that allows all the participants to sit around the Volcano cup. Tables work very well as does the floor. Once you have the space, set the Volcano cup in the middle of the playing area. Equally divide the PongCano chips among all the players. Any unused chips are placed in the Volcano cup. Pass the ping-pong ball to the first player and begin!

Players take turns attempting to bounce the ping-pong ball into the Volcano cup. Based on the outcome of the bounce, one of two actions are immediately taken.

Note: If a player no longer has any chips, they are still in the game, even if they cannot place any chips in the volcano!

Game play continues until one player has claimed all the PongCano chips.

My little geeks love another game very similar to PongCano called CUPONK, but  PongCano is designed to be more “at the table” and is better suited for a gathering of friends and family. This focus on social play will appeal to my little geeks as will the fact they get to bounce a ball on the kitchen table. I can tell you that this is something that has never happened in my household before without a quick corrective word from a parental figure in a tone that clearly communicated disapproval. My little geeks were eager to point this out to me, with a smirk.

I have two concerns about the game. First, there is no time limit specified. This wouldn’t be an issue if the usual game lasted only about 10 to 30 minutes, but I don’t think that is the case here. The game ends when a player has all the chips. This conditional requirement might not occur for a very, very long time. It is likely my little geeks will grow board of the game well before it is even close to ending. The same statement is true for any adults I might play this with. Second, the Volcano cup is pretty small. This will make the game difficult and frustrating for my little geeks if they don’t sink the ball into the volcano from time-to-time. If they get too frustrated, they’ll stop having fun and the game will be put away. This is not how any game should end.

To address these two concerns, I will be implementing a time limit on the game. I will also allow all the players to get as close as they want to the Volcano cup with the only rule being that the ball must bounce on the table once before it can be counted as a score if it should go into the cup. These two house rules should adequately address my early concerns and can be adjusted or removed fairly easily without directly impacting the original rules of the game.

After taking literally only a minute to explain the game, another minute to demonstrated, and less than a minute to answer any questions my little geeks had, we put the volcano in the middle of the table, passed out the chips, and elected the 4-year-old to go first. But before we started, I asked each little geek their thoughts on PongCano.

Will they still think the game is cool after they fail to sink the ball into the cup after 20 tries or will their frustration boil over like the hot lava from the volcano? Let’s find out.

My entire family loves playing PongCano. It’s a great game we can place on the family table right after supper and enjoy as a family within seconds. This game is especially appealing to my littlest little geek (age 2) who likes to get the game down on the floor and put the chips in and out of the volcano over and over again. When we bring it to the table, he insists on putting all the chips in the volcano before we can start. He is too young to play it yet, but he already is enjoying the game in his own way.

My initial concerns about the game were spot on. My little geeks had a difficult time sinking the ball into the cup, but improved when I invited them to get closer. Note that I said “improved”. Their average number of successful tries increased enough to make the game entertaining to them, but hardly made the game a walk in the park. We also used the time limit. This put the pressure on the players and made everyone get really excited towards the end. Once the timer beeped, we stopped the game, counted the chips, and declared a winner. This sense of urgency does not exist in the original game rules until all the chips are in the volcano or one player has all but a few chips to claim victory. The time limit really seemed to make the game all the better for us as we raced against the clock and each other. Your results may vary.

My only displeasure with the game is that it does not come with a rule book. The rules are printed on the back of the game packaging box that would otherwise be tossed when the game is removed, but must now be saved. In truth, PongCano is not rules heavy (you could write down the rules on the back of a napkin) and after playing it once you could remember the rules without issue. But what if you only play the game once a month or not at all for several months? You could easily forget.

The simple solution here is to write down the rules on a small pieces of paper and put it in the cup with all the other pieces. Simple and elegant, and some would argue, unnecessary.  The entire game itself is stored by placing the chips and ball in the Volcano cup. This makes the game very easy to pick up and store or simply set aside, as the game’s footprint is exceedingly small. Adding a small piece of paper would not impact this in the slightest. 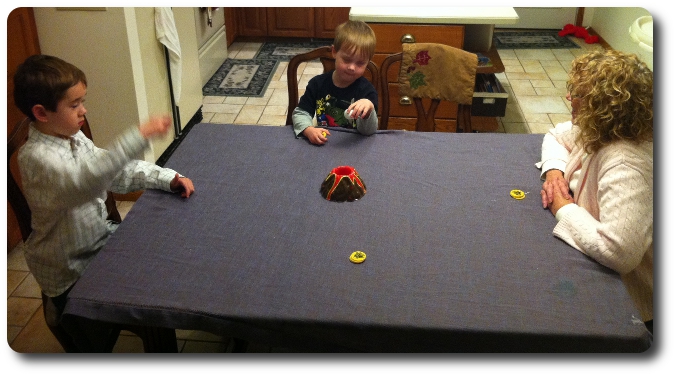 After I taught the game to my little geeks, they went right to their grandma and taught her!

Gamer Geeks, while visually interesting, this is not a Gamer’s game by any means. First off, you’ll be terribly annoyed that the game can technically never end once started. Without a set number of rounds or defined time limit, you can expect a game to be either played in less than 5 minutes or until everyone gets tired of playing the game and moves on to something else. This, in addition to having no depth or challenge other than feats of dexterity and hand/eye coordination, make the game a pleasant quick filler at best. And yes, I realize PongCano would also be really great for parties with various alcoholic drinks, but so would Settlers of Catan (take 1 drink each time the Robber is rolled, for example).

Parent Geeks, this is a fantastic game to play with family and friends. Expect laughs, boos, and lots of throwing up of hands into the air in total disbelief as an opponent makes a 1-shot-in-a-million and claims victory. While the learning curve for the game is exceedingly easy for everyone (take ball, bounce into cup, repeat), do expect your little geeks to get frustrated. This can easily be avoided with the two house rules I described above or by implementing a house rule or two of your own. This is also a great game to bring to a friend’s house when they have you over for dinner. After the dishes are cleared, invite everyone to the table, slap down the volcano, and just see how big their eyes get and how wide their smiles stretch.

Child Geeks, this is a fun game you can play by yourself, your friends, moms and dads, grandmas and grandpas – anyone you can think of! It’s so easy to play, you can be the one to explain the rules, set up the game, and get everyone started. Expect lots of disappointment at first when you try to get the ball into the Volcano cup. You’ll most likely miss many times, but don’t give up! Each time you try, you’ll get better and you’ll be bouncing that ball into the cup in no time!

I rather enjoy PongCano and consider it a better game than CUPONK. For the record, I am not the least bit infatuated with CUPONK and wouldn’t be upset if it should magically disappear one evening. My little geeks like playing it, however, and ask for it often. With PongCano now available, I’ll be offering it up as an alternative to a game we can all share and enjoy as a family. If you are looking for a fun family game that can easily fit and play on your family table, look no further than PongCano!

One Response to PongCano Game Review