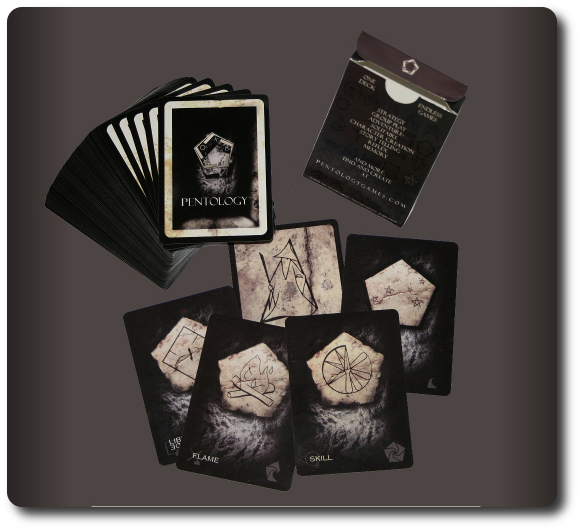 The Pentology deck is comprised of 60 cards, with two of each card in the deck.  The deck is then further divided into Character cards and Characteristic cards. The artwork is iconic in nature and throughout there is a strong sense of art direction and purpose. The cards are thick and of high quality with a light gloss. The text and images on the card are easy to read and distinguish. In summary, quality through and through.

The Character cards represent what could be considered fantasy archetypes, but not your standard fare. Represented are the Guard, the Gypsy, the Magus, the Brute, and the Thief. You could derive from this list the traditional fantasy fighter, thief, ranger, wizard, and bard hero types, or you could expand on them. The choice and direction is yours and there simply is no wrong way to go about it.

The Characteristic cards represent actions, characteristics, outcomes, elements, and events. Blocking, brawling, loyalty, betrayal, water, flame, and so on. The intent of the cards is to suggest direction and meaning, but it is up to the players to define what the meaning of each card really is and how it further influence the game.

Throughout the cards, there are two key game mechanics. These are Progressive Position and Variables.

Progressive Position defines the card’s strength or weakness against other Character and Characteristic cards. In total there are five different positions represented by five shapes: Circle, Cross, Triangle Square, and Star. A position is always stronger than two and weaker than two. The order of inferrior and superior is as follows: 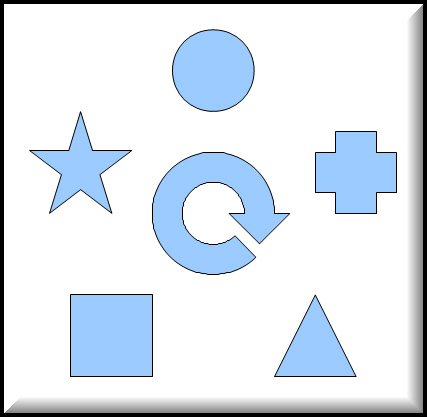 The Character cards are also related to these shapes:

The Characteristic cards are further subdivided with variables, which are represented by “waves”. The waves are small icons located at the bottom right of the card and have either one or five wave icons.

The game itself comes with five different games, ranging from solo to group play. Each game is meant to introduce a different level of play the cards can provide, from the very basic to the more complex and abstract. A growing list of games created by a fan community is also being built, providing unlimited and endless possibility of games to be played with Pentology.

Pentology has a great deal to offer. My little geeks already enjoy a number of traditional card based games (War, Go Fish, and Crazy Eights to name a few). They also already understand that cards can mean different things depending on what game is being played. Put another way, they appreciate that the cards themselves provide the medium in which the game is played.

When I introduced Pentology to my two oldest little geeks, they immediately wanted to sit down and look them over. I encouraged them to talk about what they saw on the cards, tell me if they started to recognize any patterns, and asked them what they thought each card meant. In all cases, they had no problem finding the Variable and Progressive Position icons and were able to separate the Character cards from the Characteristic cards. As far as what they meant, they had no idea. When I explained that they could mean anything they wanted, they became excited and immediately started giving the cards meaning.

When they asked me to play the game with them, I said we could play any game they wanted, but they would have to create! This really excited them! They had done this type of game creation before using traditional playing cards, dice, and my HeroScape miniatures (a game, I might add, I have never, ever won). They instantly got to work and started making up an epic game. I only gave them three rules to follow:

Rule #1: The game has to use the cards and either the Variables (waves), the Progressive Position, or both game mechanic

Rule #2: They could add any additional game components to it (dice, counters, miniatures, etc.)

Rule #3: Both of my little geeks had to agree to the rules before they taught it to me

And so, I left them on the living room floor to design their game and took my youngest little geek (age 1) into the other room to play with cars and trucks. But before I did so, I asked them what they thought of Pentology.

“These cards are awesome! I can make all kinds of games with these!” ~ Liam (age 6)

“I am going to make a hero game with fighters and wizards and dinosaurs!” ~ Nyhus (age 4)

With that, I left them to create a masterpiece that I was certain was going to be designed to never let me win, but would be an absolute blast to play.

Pentology is as good as you make it. I cannot stress this enough. The cards provide you with a creative means to whatever end you can imagine. This is refreshing for me, but some might find it a rather daunting task to formulate their own games using the tools Pentology provides. Luckily, for those who do not have the time to create their own games, there are a number already available to you to play, both in the rules and on the Pentology web site.

My favorite Pentology game to play with more experienced gamers is Spellweave, which is a complex game of hand management and tactical thinking. With my little geeks, we really enjoy playing Day of Battle and Storytelling, which is not so much a game but a fun interactive group adventure.

The game my two oldest little geeks created was called (and I’m not making this up) “Chimpooki!”, which is a bit of an inside family joke. “Chimpooki” was the Pokemon character I created  that was the second cousin (twice removed) to Pickachu. Chimpooki wore thick black glasses, had buck teeth, and was bright orange. My little geeks and I would run around the house playing “Pokemon Battles” where one of them would be the Pokemon trainer and the other two would be the summoned Pokemon. Whenever I was summoned, I was Chimpooki with the power of fart blasts.

Anyway, wow, labored that point. Here are the rules to Chimpooki as explained to me by my little geeks:

1. Give each player a six-sided die and 5 game counters

2. Separation the Character and Characteristic cards. Each player is randomly given a Character card. This card represents their Summoner. The remaining Character cards are removed from the game.

3. Deal out five Characteristic cards per player, face down. These cards represent the five rounds in which the game will be played. Remove the rest of the Characeristic cards from play.

1. All players secretly select one of the cards in their hand and place it face down in front of their Character Card.

2. The cards are revealed! These cards represent the magical energies the Character is summoning.

3. All the players then roll their dice and add the value to the number of waves on the card – if there is ever a tie, the rule of Progressive Possition is used – if there is still a tie, both players take damage! (add one counter to the Character card)

4. The player with the least smallest amount of Power (dice roll + wave) is the looser and takes 1 damage (add one counter to the Character card).

6. Repeat step 1 until all the Characteristic cards have been used (five rounds of play)

The winner of Chimpooki is the player who has the Summoner with the least amount of damage!

WOW! I was blown away at the level of creativity! The game designed showed they understood the basics of tactics and strategy, of hand management, and the luck mechanic that could spoil even the strongest of cards which would require the player to do some basic risk/reward management! More importantly, they designed the game to be played quickly and with a well defined end goal. Chimpooki is, by far, one of the most entertaining games I have ever played with my little geeks simply because they created it…also, I win from time to time, too.

Pentology is a gem. It provides all one needs to be freely creative to design and play their own games. The core rules of Progressive Position and Variables work very well with all the cards and add a great common ground when designing games. For the young budding game designer in your family, Pentology would be a wonderful tool to practice making and playing games, expanding on themes, and improving rules of play.

The sky is the limit with Pentology and I couldn’t be happier. For so little, it delivers a seemingly endless variety and replay.

Pentology was provided to Father Geek for review purposes. Father Geek was not paid, bribed, wined, dined, or threatened in vain hopes of influencing this review. Such is the statuesque and legendary integrity of Father Geek.