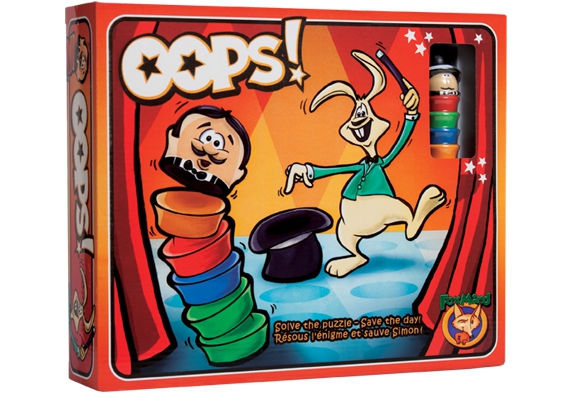 In Oops!, the player is challenged to solve simple logic puzzles by moving colored pieces on a board to reassemble the magician. It is not an easy task. There are several rules that limit movement and stacking which must be taken into consideration. With five different levels of difficulty, players will learn the basics and gradually move to more complex puzzles. The game teaches and challenges at the same time making each game an entertaining and growing experience.

Oops! is comprised of a 1 Magical Game Box that holds the game pieces and flips to be used as the playing area, 1 puzzle booklet that contains 50 puzzles with solutions), and 9 Magician pieces (7 colored pieces, 1 hat, and 1 head). Also included is a small sack to place all the pieces in but is more or less unnecessary as all the pieces fit easily in the Magical Game Box when not in use. All the puzzles pieces and Magical Game Box are made of solid plastic and the and the puzzle book is easy to read and to follow. A quality game that is both durable and easy to play!

To set up the game, flip the Magical Game Box cover over. There is a hinge in the center that allows you to pull the top out and over to reveal the playing area. Remove the Magician pieces and the puzzle book before closing the box.

The puzzles are ranked. The more stars they have the more difficult the puzzle. Each puzzle is numbered 1 through 50 which allows the player to start at the very easiest puzzle and work their way through the puzzle book. The numbers also allow the player to jump right to a specific puzzle.

Each puzzle has an illustration that clearly shows how the playing area should be set. This is an excellent exercise in pattern and color matching, as well as strengthening the little geek’s visuospatial skills!

Once the playing area is set and double-checked against the puzzle illustration, the player is read to solve the puzzle! 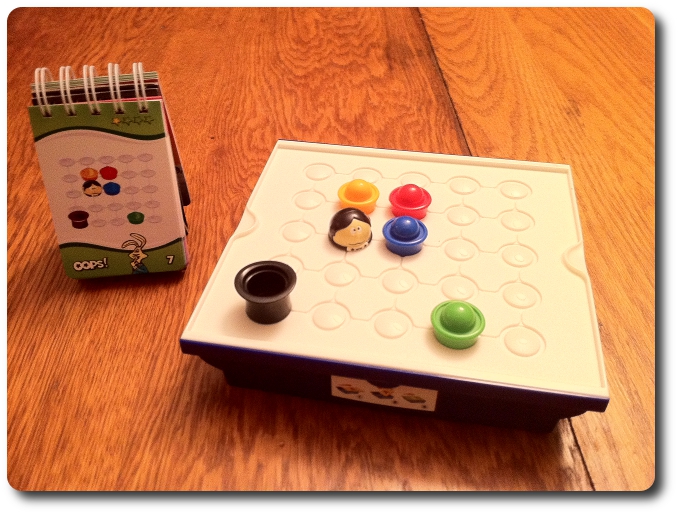 The Magic of Puzzle Solving

The goal of the puzzle is to move all the pieces scattered around in the playing area into one single stack with the hat piece on the bottom and the Magician’s head at the top. The color order of the pieces between the two is not important. Colors are used to set up the puzzle and to help the player understand the steps to complete the puzzle if they look at the puzzle solution.

When moving a piece, the following rules must be followed:

It reads like a large list of rules, but it will only take a few tries before the rules are understood. The suggested approach for little geeks is to start with Puzzle #1 and move through the puzzles as they complete them. This will allow the player to slowly be introduced to more complex puzzles and reinforce the strategy and logical thinking of the previous puzzles.

Solving the Puzzle and Checking Your Work

If all the pieces in the paying area are stacked using the movement rules, then the puzzle has been solved correctly!

Learn more about the game and read the rules by visiting the game web site.

My little geeks have always enjoyed puzzles. This is especially true for my now 4-year-old who enjoys solitary activities more than his two brothers. There is just something about puzzles that keeps me coming back to them, too. I think it is the challenge of it and the inflated feeling of achievement that one gets when you complete it. You might not have saved the world, but competing a 5000 piece puzzle is most definitely note worthy. The same can be said about logic puzzle games such as Oops!

When I showed my little geeks the game, they were immediately interested in how it worked. It could be argued that all games are puzzles with each player attempting to determine the best approach to victory and working with the defined rules to achieve the victory condition. What makes this game different, however, is that it is a single-player game. Most games have an opponent that adds a different level of complexity (and stress) each time you play. Oops! does not have any of this as a single-player designed experience.

When I explained the rules to my little geeks, all but my oldest stuck around to play the game. There were just a too many rules for my 4-year-old to grasp in the morning and his 2-year-old brother is pretty much his shadow. As the two youngest little geeks went into the other room to play, my oldest and I worked through several easy puzzles together to get the movement rules down and to address any questions he might have. It only took two puzzles before he understood what he could and could not do and was ready to try a puzzle on his own.

As he set up the next puzzle he’d attempt to solve, I asked him what he thought of the game so far.

“I like this! It really makes you think but it isn’t too hard when you really think about it. I also like how easy it is to start the puzzle over.” ~ Liam (age 7)

Most excellent. Let’s see how he feels about it after an hour or so of play.

Oops! is a hit, at least with my wife, my 7-year-old, and me. It is a simple logic puzzle that is fast and fun to figure out. What makes it equally enjoyable is the size of the puzzle. Each puzzle is very small which reduces any sense of being overwhelmed. My oldest in particular has really taken a shine to the game and will just sit there taking his time figuring out how the puzzle should be solved. I did note a number of times that his frustration was getting the better of him and casually suggested he “take a break”. He did, came back refreshed, and was able to solve the puzzle.

Of course, I couldn’t miss this golden opportunity to make my son aware that frustration and anger clouds the mind and will stop you from thinking clearly and logically. I know, so very Jedi of me, but it is the truth. What the puzzle game really does and does well is test and stress the mind to a point where it actually strengthens the reserve and mental stamina of the player. By being challenged in small doses, one can easily be aware of their own state of mental being and correct accordingly. If only all situations in life were that easy to deal with.

The end results is a game that my oldest little geek and I enjoy playing together. Yes, this is a single-player game, but there is no reason why two or more people can’t sit around the playing area and work as a group to determine the puzzle solution. This makes for an excellent cooperative exercise and strengthens to cooperative and team play geek skills. 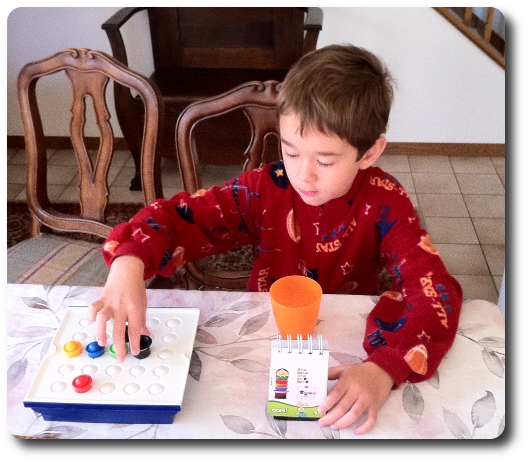 My oldest little geek was immediately focused on solving the puzzles which he found challenging and rewarding!

Gamer Geeks, as interesting as this puzzle game is, it is not for you and your gaming buddies. I would venture to guess that most puzzle games would fall slightly short of being Gamer Geek approved because of the lack of “game” in the game, if that makes any sense. There is only one solution and only a few ways to get there. Solve the puzzle and there is no replayability without an element of randomness that always makes the puzzle different. This is close to impossible, however, as it would be very hard to develop a puzzle game that always offered a random puzzle to solve. This seems like a contradictory statement to my earlier declaration that all games have a puzzle-like element to them. But a puzzle game that is purely just a puzzle has pigeonholed itself. Without a “game” other than the challenge of solving the puzzle, it just isn’t going to appeal to Gamer Geeks. However, if you are a Gamer Geek who enjoys a good single-player puzzle, Oops! should please you.

Parent Geeks, this is a great puzzle game that is sure to please and challenge you and your little geeks. The game is single-player but is very inviting and works well for two or more people to sit down at the table and work through a puzzle together. Expect quality time with your little geeks and some very rewarding moments when your little geek solves the puzzle and has a smile as big as Texas on their face. Reward them, for many of these puzzles are not easy! Do start with the easy puzzles first and work your way through to the more difficult puzzles. This will reduce stress and make the puzzle difficulty increase seem natural and very manageable.

Child Geeks, this is a great game to get out and play whenever you feel like you need some quiet time or want a challenge. If you like puzzles, you’ll greatly enjoy Oops! You’ll also enjoy how fast it is to set up and play! Uh-oh, can’t figure out the puzzle? Try a puzzle that is less difficult or try again using the puzzle guide to easily help you set it up and start over. If you get really lost, follow the step-by-step instructions that show you how to solve the puzzle and then try it again.

I very much enjoy Oops! for what it is and even get it out to play on my own when I am looking for a quick solitary diversion while I eat lunch. The puzzles are light, quick to set up, and challenging. Game breakdown and storage is a snap and everything about the puzzle game works brilliantly. If you are looking for a unique game for you and your little geeks, do check out Oops!

One Response to Oops! Game Review