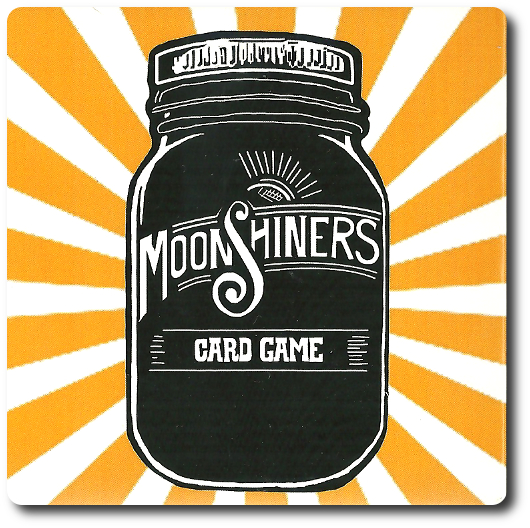 Up in the hills and mountains, where paved roads turn to dirt paths, people live their lives in quiet solitude. Their philosophy matches the rough landscape and the difficult life they lead. Rough living makes these people tough and nothing is tougher – or stronger – than their homemade liquor. A Hillbilly hoedown is in the works and the best moonshine will win the day.

Moonshiners, designed by Steve Zimmermann and published by Dragon Heart Studios via the Game Crafter, is comprised of 6 Player cards, 91 Item cards, and 21 Moonshine cards. The cards are as thick and as durable as your standard playing card. The illustrations depict the various ingredients needed to create moonshine (illicitly distilled or smuggled liquor) and the over-the-top stereotyped individuals commonly referred to as “Hillbillies”.

Well, In the North of Carolina, Way Back in the Hills

To set up the game, first separate the Player, Item, and Moonshine cards into different decks.

Second, shuffle the Player cards and deal 1 to each player face-up. This card represents the stereotypical Hillbilly the player will be using during the game and lists the ingredients needed to distill the Hillbilly’s signature brew (shown at the bottom of the Player card). Any Player cards not used should go back in the game box. 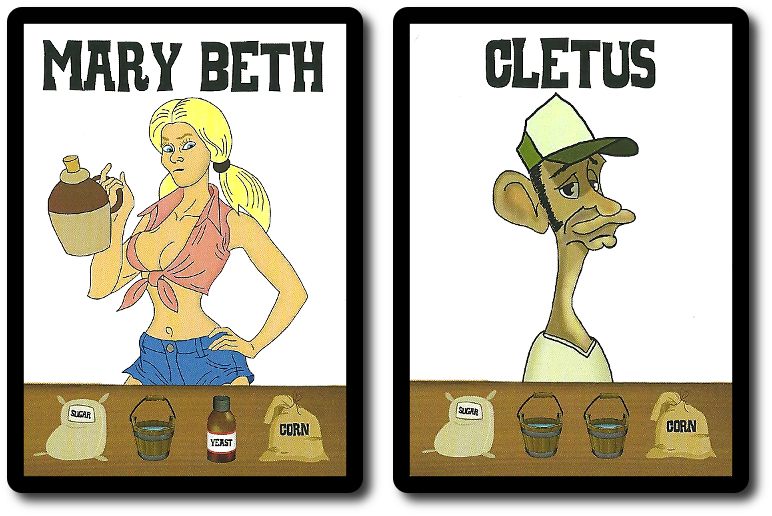 Fourth, place the Moonshine cards next to the Item deck and within easy reach of all the players.

That’s it for game setup. Select who will be the first player and begin.

Me and My Old Pappy and He Had Him a Still

Moonshiners is played in rounds and turns. There are no set number of rounds per game and every player will have 1 turn per round. A player’s turn consists of selecting 1 action out of a possible 3. These actions are summarized here.

If the player has cards in their hand they do not want or need, they can discard them to the Item discard pile, face-up. There is no limit to the number of cards a player can trade in on their turn.

Sabotage, Steal, and Calling the Cops

There are several cards in the Item deck that are meant to cause trouble. Some of these cards can be kept for later use and others penalized the player as soon as they are drawn.

This Item card allows the player to randomly take 3 Item cards from an opponent. From these 3 Item cards, the player decides which ones to keep (adding them to their hand) and discards the rest. The opponent who lost their 3 Item cards immediately draws 3 new ones from the Item draw deck. 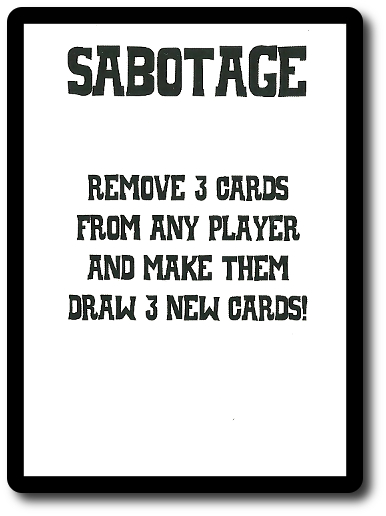 This Item card allows the player to take 1 Moonshine card from any opponent they like. This card causes a great deal of trouble and has been known to create a passive aggressive atmosphere at the gameing table among the players. 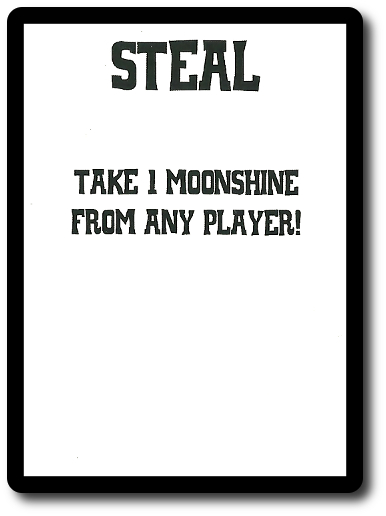 If this card is drawn by the player, they must return 1 Moonshine card back to the middle of the playing area. They then continue to draw back up to 7 cards. 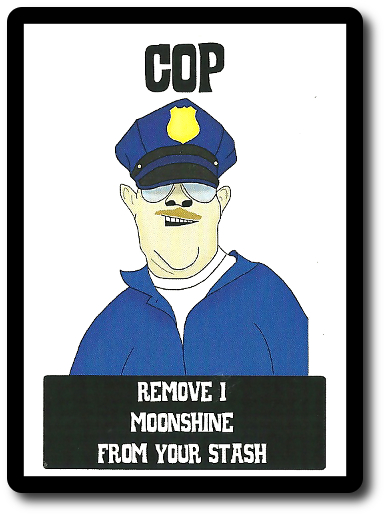 Man’s Best Friend blocks “Cop”, “Steal”, and “Sabotage” cards. If one of these nasty cards is played or drawn, the player can immediately play their “Hound Dog” card to negate the card’s effects. The “Hound Dog” and the card it chased away are then both put in the discard pile. After playing the “Hound Dog” Item card, the player draws 1 card to bring their hand back up to 7. 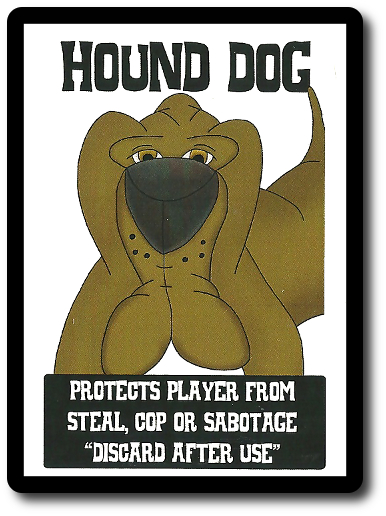 If the player has 1 Item card per listed ingredient on their Player card, they can place those cards face-down in front of them, announce they have made Moonshine, and place the Item cards in the discard pile. “Wild” Item cards can represent any 1 specific item needed by the player. 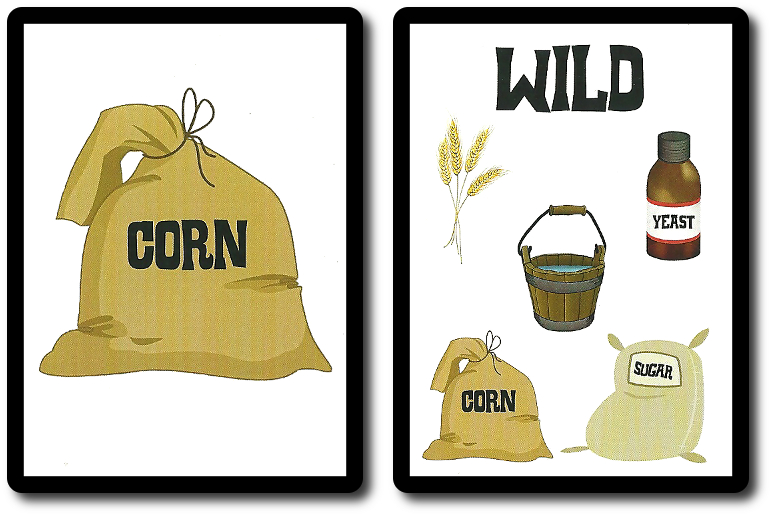 They then take 1 Moonshine card and place it next to their Player card. 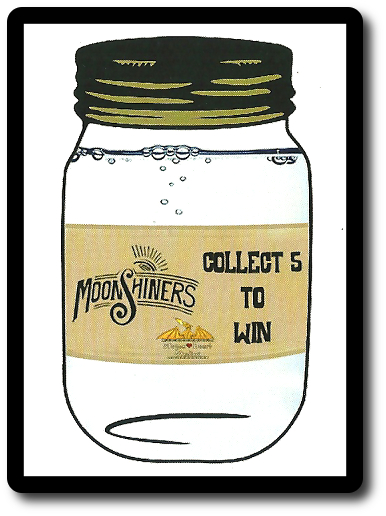 After the player has taken an action, the very last thing they do is draw back up to 7 cards by taking as many as needed from the Item draw deck. If the draw deck is depleted, shuffle the discard pile to create a new draw deck. Players must react to “Cop” Item cards if they are drawn.

He Brewed White Lightnin’ Till the Sun Went Down

The game continues until 1 player has collected their 5th Moonshine card. This player has won the game and will most likely go to the jail for a very, very long time if they are caught making so much illegal hooch.

To learn more about Moonshiners, visit the game’s web page.

The Child Geeks enjoyed themselves and the frantic nature of the game to collect items. The various Item cards that cause problems were always met with disdain and with glee, depending on who was giving and who was receiving. One aspect of the game the Child Geeks really enjoyed was that it seemed impossible to have a runaway victory. Just because a player had 2 more completed Moonshines than their opponent did not mean they would win. According to one Child Geek, “As soon as a player begins to make a lot of Moonshine, they become a target and really get hammered.” But even opponents who are being slowed down by constant attacks can still make Moonshine, keeping everyone in the game and on their toes. As one Child Geek put it, “I don’t really understand why all these people want to make this stuff, but I’m happy to help my character make it the fastest!” When all the games were over, the Child Geeks voted to approve Moonshiners. 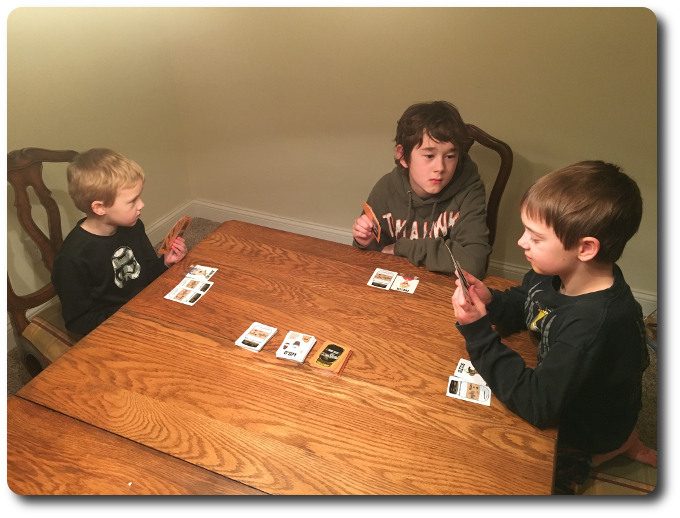 After only 1 round of game play, the Child Geeks had no problem playing the game by themselves

As you can imagine, the more conservative Parent Geeks were not pleased with this game. The “Mary Beth” Player card and her illustrated cleavage was thrown out immediately. Her lack of use in the game did not hinder game play in the slightest. Nor did the creation of illegal liquor, as the game did not glorify it in any way or suggest it be consumed. According to one such Parent Geek, “This is not a game I would play with my kids and it’s a game I would think twice about before playing with friends.” The conservative Parent Geeks appreciated all of this, but the game never sat right with them. The more progressive Parent Geeks also removed “Mary Beth” when playing with their kids, but didn’t think the game was glorifying or highlighting anything socially inappropriate. According to one such Parent Geek, “The illustration of the mountain babe is ridiculous, but the game itself is fine. It’s stupid easy and that’s perfect for a light family game.” When all the games were over, the Parent Geeks were undecided when it came to their endorsement, resulting in a mixed level of approval.

The Gamer Geeks are some of the most progressive elitists you will find. They played Moonshiners and hated it. According to one Gamer Geek, “I like the idea of competing to make the best hooch, but the game is just way too simple. All you are doing is collecting cards, playing a card to slow someone down, and hoping you get enough to make liquor faster than your opponents. It’s boring.” Another Gamer Geek said, “I think I would play this game again, but only if I was drinking what the Hillbillies in the game are drinking.” The game was found to be too easy, too light, too predictable, and too shallow to be of any interest to the gaming elitists. They snobbishly rejected it.

Moonshiners is not a difficult game and most certainly falls into the “casual game” category. Its use of Hillbillies and the creation of moonshine is a thematic narrative pretty much everyone can understand, making the game easier to approach. It lacks any sense of humor other than the illustrations on the Player cards, which I’m sure might insult a few who look at them too closely. However, the game is meant to be light and to be a fun distraction. Not a game that is disenfranchising or making social slurs towards backwoods bumpkins. I myself am only 3 generations away from eating possum, and did not once feel insulted.

While the Gamer Geeks came down harshly on Moonshiners, I am not in total disagreement with their discouraging remarks about the game. There is very little need to think in this game and the constant hunt for “Ingredient” Item cards turns into a repetitive exercise. When you do get Moonshine created, it can easily be taken from you, which makes the process of creating it feels like wasted effort. Several suggestions were given, such as the ability to trade “Ingredient” Item cards with a General Store or the ability to trade with other players. All great ideas, as it would allow for a deeper level of player interaction, trading, and even negotiation.

Throughout all the games, I wanted Moonshiners to be more. It has the essential building blocks of being a deeper and more strategic card game, but favored simple play that kept it and the players from doing much more than just playing with what they had instead of what they wanted. And therein lies the game’s most important need: the ability to empower the player. Cards dictate everything, putting the player’s needs to the side. The end result is a game you play once and don’t feel like you want to play again.

But let’s not be too harsh. Moonshiners was designed to be a game that would not require a lot of brain power to play. For what it is, it does it’s job. The question every player will need to ask themselves is if the game leaves them thirsty for more or has enough kick as it is.