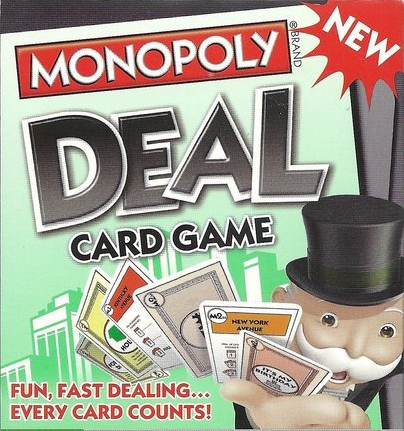 Monopoly Deal is a card game where the players race to be the first to collect 3 complete property sets. Along the way, they will have their property taken from them if they don’t manage their money in their bank wisely.

This card game consists of property cards, property wild cards, action cards, rent cards, and money cards for a total of 106 cards to play with. There is an additional 4 rules cards provided that makes the entire deck 110 cards in total. Truth be told, however, the game is very easy to learn and the rule cards will be unnecessary.

Each player starts with 5 cards and draws 2 cards at the beginning of their turn. On the players turn, they can play up to 3 cards. These cards can be played into the players “bank pile”, “property sets”, or the “action pile”.

The bank pile is used to store money during the game. Unlike Monopoly the board game from which this card game is based off of, the bank pile is not used to buy properties. Rather, all the cards in the bank pile are used to pay other players when required and to protect property sets. Think of the bank pile as a financial wall that protects the player’s property investments.

Money cards are placed in the bank pile, but action cards can be placed there, too. Most cards, other than wild cards and property cards, have a money value. The player is able to either play the card as an action or place it in the bank pile to ensure they have enough funds to fend off debt and rent collectors.

The property sets consists of the same names and colors of all the properties in the Monopoly board game. Included are the railroads and utilities. Some of the cards are “wild cards” that allow you to match them with 2 or more property colors.  Depending on the properties, a complete set might be 3 or 2 cards. For example, Boardwalk and Park Place complete a set with only 2 cards, while Connecticut Avenue, Vermont Avenue, and Oriental Avenue complete a property set with 3 cards. Houses and Hotels can be played on completed property sets to greatly increases the total value of the property set.

A player can obtain money and property two different ways. The first is to play the money and action cards directly to their bank pile and play the properties down in front of them to create property sets. The second and much more fun way is to obtain money and property from other players. This is done by playing rent cards and other action cards into the action pile. If the rent card played matches one of the player’s properties, they can demand the amount of money the property set is currently worth from another player. This could be anywhere in the range of 1 to over 10 million dollars. The player who must pay that amount then determines if they want to pay by taking money out of their bank pile or giving away property sets, or both. This is a very important aspect as it allows the players to choose how best to manage their own side of the game.  Do they weaken their bank pile to protect their properties or do they give up some of their unwanted properties saving their bank pile to protect much more wanted property sets at a later time?

Play continues until 1 player has 3 complete property sets and is declared the winner.

I really like this game. It has the same feel as its board game counterpart but none of the repetitive roll-move-roll-buy-roll-move mechanics. There is also a great deal of player interaction which makes the game much more entertaining and exciting. Players on the verge of winning might suddenly be bombarded by debt and rent collectors which they might not be able to financially handle and be forced to give up their property sets. This gives the game a much more chaotic and exciting feel. While a Monopoly board game could take many hours to complete, Monopoly Deal will take only about 15 or more minutes and leave the player hungry for more.

This game does require reading and simple math. Younger children who cannot read yet will struggle with the card text. I suggest you match the younger kids up with the older kids or adults as soon as possible so they can get into the action and have as much fun as the other players. And fun they will have. 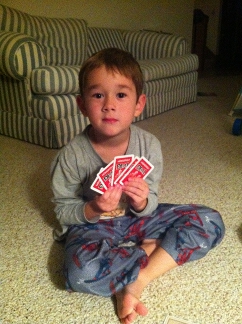 More important than the reading and the math is the surprisingly entertaining depth of  strategy and tactics that must be used by the players. I was highly skeptical at first of this game and was overjoyed to learn that there was much more to it than the previously mentioned repetitive roll-move-roll-buy-roll-move mechanics I so greatly loath. I mistakenly assumed that Monopoly Deal was a card version of the board game. Nothing could be further from the truth. There’s a lot going on with the game and lot of choices, but not so many as to overwhelm and stifle game play length and speed.

Critical decision making is also here, but again, not to a point where it will bog down a player with heavy choices. On a player’s turn they are limited to only three things, but each card is playable somewhere. There is never a “bad” card in the players hand. Even if the player doesn’t want a specific property, they can always play it out to give it away later to protect more valuable property sets.

My oldest son really likes the game. Mostly, I believe, because of the player interaction portion where he gets to tell his parents to give him money and property cards. Like father, like son in this case. I have always enjoyed games where the players interact as opponents or cooperative team members. A game without interaction seems like everyone playing the same game of Solitaire to me. Yes, you are all playing the same game, but you aren’t playing with each other.

In conclusion, get this game. I think Monopoly Deal is vastly superior to its board game counterpart in every way. The next time someone says, “hey, let’s play Monopoly”, I’ll be sure to bring out  Monopoly Deal and completely fail to mention I have the board game.