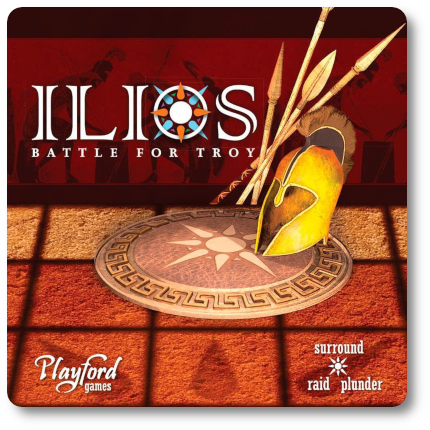 Chinese general, military strategist, writer and philosopher, Sun Tzu, said “The supreme art of war is to subdue the enemy without fighting.” This is absolutely the case for this game. To beat your opponent, you must wage a war of patience and tactics. Victory will go the cleverest of generals, not the strongest.

Ilios, designed by Eliot Hochberg and published by Playford Games, is comprised of one game board, two cloth bags, 40 Warrior tiles, 38 discs (in four different colors), and seven expansion tiles. The game board and tiles are made of thick and durable cardboard. The discs are made of solid wood.

To set up the game, first place the two Oracle tiles and all the Warrior tiles into a cloth bag.

Second, each player takes a turn drawing three tiles from the bag, ensuring that the tiles drawn are hidden from their opponents. This is the player’s starting hand. Give each player their selected color of discs.

Ilios is played in turns with no set number of turns per game. Each player’s turn is comprised of four steps which are summarized here.

Note that Wasteland tiles can never be occupied.

If a tile is surrounded by eight sides (one of those sides can be a Wasteland tile), with player discs, or is on the edge of the game board (reducing the number of needed tiles surrounding it), it can be plundered. The surrounded tile is removed from the game board and kept aside by the player whose color disc occupies the tile taken. The disc, however, remains on the game board.

As the game progresses, more than one tile can be surrounded by a single play. Resolve each surrounded tile before continuing to the next step.

As their final action, the player draws one tile from the bag, adding it to their hand.

This completes the player’s turn. The next player in turn order sequence now goes starting with step one.

The game comes with an expansion titled Troy. The rules of the game remain largely the same with a few additions. The Troy tile is placed in the middle of the game board and the Warrior tiles with an eight value are used as the Wasteland tiles, one per player. The new tile, the “Horse”, allows the player to jump over open or occupied squares (including the Wasteland), meaning the player need not place the Horse on a space that is adjacent to another tile. The jump is up or down, left or right. Never diagonal. The other change is how you plunder the Troy tile. It first must already be surrounded and then occupied by the player. This where using the Horse (representing not only a real horse, but also the Trojan Horse) comes into play. Finally, when a player reinforces, they can use the Oracle tile to trigger a special ability if they have plundered it. Each plundered Oracle tile lets the player to return a tile to the bag and draw again if they are unhappy with their initial draw.

To learn more about Ilios, visit the game’s web page.

The Child Geeks learned how to play, but the game never really took off for them. According to one Child Geek, “I don’t really understand the game, although I did win twice. It just feels a bit off.” But not all Child Geeks found the game to be a bit too far afield to grasp, so to speak. Another Child Geek said, “I thought this game was going to be like Checkers. It’s not. But it isn’t Chess either. I like it and I like how you can play with other people.” When all the games were over, the Child Geeks voted and it was clear that this group understood the game, but didn’t all agree if it was a game for them. The Child Geeks gave Ilios a mixed endorsement, with the more skilled Child Geeks leaning towards full approval.

The Gamer Geeks enjoyed the game’s depth, but not the “luck factor” that was the result of the blind pull from the bag. However, they also agreed that having a hand of tiles to always pick from offset this by giving the player options. In fact, one of the the aspects of the game all the Gamer Geeks agreed upon is that Ilios was a game in which a player would never be stuck.” According to one Gamer Geek, “Because the draws are random and the board fills up, it is only a matter of time before a player has no options left at their disposal. The game designer’s idea to force the player to reveal their tiles, proving they are stuck, but then allowing them to proceed was a good approach. It keeps the game going.” All the Gamer Geeks liked the game’s speed, but that’s the last point of the game that they all agreed on. From there, the elitist camp of gamers split into two. One group who found the game to be fun and the other who thought there were better abstract games out there that played just as fast and gave the player’s more control. The final vote showed that the Gamer Geeks gave Ilios a passing grade, but not fully.

This game is so abstract it took all our players a turn to “get it”. Not a bad thing, but it makes teaching the game a two-step process. First, you have to explain it. Second, demonstrate. Normally this is a pretty “duh” statement. Of course you explain and then demonstrate. How else would you do it, you silly-billy? But in this case, I put emphasis on first explaining and then demonstrating. This is because of how a player’s turn works. You need to make decisions before you place a tile, then you work with the tiles. Placement is important, but even more important, is understanding how a single tile placement alters the landscape of the game.

To enjoy Ilios you need to enjoy abstract games. Yes, the game has a theme, but it’s pasted on. Nothing about the game suggests war, warriors, or a battlefield. What you have is tiles that define movement, discs that define occupation, and that’s it. You are moving pieces on the game board, shifting and counter-shifting, until the game is over. None of our players ever thought they were battling it out, but nor did they have difficulty understanding the game’s intent. For those who love abstract games, you won’t have any issues. For those who need to associate pieces moving on a board to a larger narrative, get ready for disappointment.

This is a fast game, good depth, and interesting choices to be made. While others in our review groups were not sold on the game, I rather enjoyed myself. What makes this game fun, for me, was the interaction with the other players. Having others place pieces on the game board made everything feel fresh and exciting. I never knew what to expect, but I was always given several options regardless of the how the game progresses in front of me. No one player ever ran away with the game and the final points were always entertaining to tally. Victory sometimes went to the obvious players, but there were more than a few upsets, as well.

Overall, I enjoyed Ilios and would recommend it to anyone looking to introduce an abstract game to new players or are looking for a short game to enjoy during longer gaming sessions. The fact it can be played with four players is a big plus, allowing you and three others to go head-to-head in an abstract showdown where a direct assault is never the right answer. You need to be subtle, work through your moves, and set yourself up for success. More importantly, take advantage of an opponent’s mistake to gain ground. Do play a game or two of Ilios when time allows.

One Response to Ilios Game Review