If Only I Had… Game Review 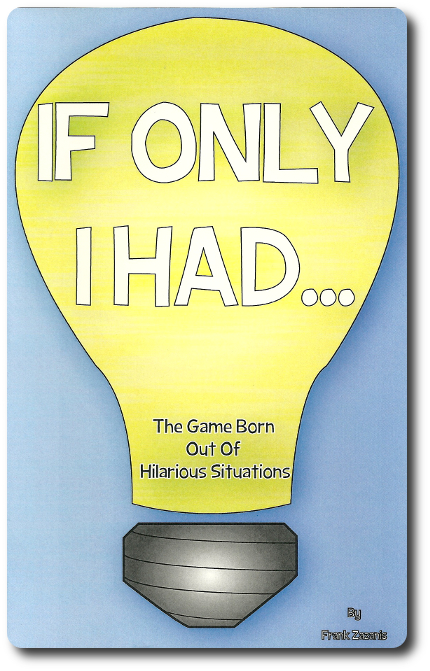 Billy Wilder said “Hindsight is always twenty-twenty.” There is simply nothing as painful as perfect clarity. How many times have you found yourself in a bad situation, knowing full well how you could have avoided it? Personally, I’ve lost count. The human mind is constantly attempting to figure things out, and for some of us (most of us) the brain spends a lot of time regretting decisions. In this game, you have a chance to provide your own thoughts on the best way to have avoided a bad situation.

If Only I Had…, designed by Frank Zazanis and published by General Nonsense Games, is comprised of 50 Scenario cards and 150 If Only I Had… cards. The cards are durable and as thick as your standard playing card.

To setup the game, first separate the cards into two different decks: Scenario and If Only I Had… cards. Shuffle both decks and place them face-down in the middle of the playing area.

Second, deal to each player 4 If Only I Had… cards. Players should keep their cards hidden from their opponents until played.

This completes the game set up. Determine who will be the first player and begin.

The Trouble With Hindsight

If Only I Had… is played in turns with no set number of turns per game. A typical game turn is summarized here.

Example of some of the Scenario cards

All the players (except the Victim) now select 1 of their If Only I Had… cards from their hand that they think the Victim will like best and places it face-down in a pile next to the Scenario card.

Example of some of the If Only I Had… cards

The other players now have a chance to defend their choice and attempt to persuade the Victim to pick their card, as well. After the Victim hears the arguments, they can select a second winner.  The player who owns the selected If Only I Had… card takes it and keeps it in a pile next to them. The remaining If Only I Had… cards and the Scenario card are discarded.

All the players, except the Victim, now draw 1 new If Only I Had… card to replace the card they played.

The game ends as soon as a player has earned 8 points.

To learn more about If Only I Had…, visit the games’ web page.

This is Apples to Apples, plan and simple. Or, to be more correct, it plays just like Apples to Apples. As such, it will be enjoyed by the Child Geeks and the Parent Geeks (if they can still tolerate games like this) and thoroughly despised by the Gamer Geeks. I’ll be lucky if they don’t tar and feather me for making them try this game.

The things I do for you people…

Teaching If Only I Had… is best done with a few examples. You should also mention that the final selection of the game turn’s winning If Only I Had… card is highly subjective. There is no one right way to go about it. As such, players should always select a card they think the Victim will like the best and then argue for it like a madman. Note that the game does require its players to read. Reading the cards for younger Child Geeks somewhat spoils the fun of figuring out who played what.

After teaching If Only I Had… to my oldest little geek, I asked him his thoughts on the game so far.

In my son’s defense, I do put a lot of games in front of him. Games like If Only I Had… and Apples to Apples are popular in the family and Humor game genres. They are also overdone. Let’s play and see if this game is any different from the many others or just one more game my family and friends will soon forget.

I got the impression the Child Geeks were bored with If Only I Had... To be fair, they have played games like this one many, many, many times before. The only new things this game provided was new questions and new answers. That was enough, apparently, for most of the Child Geeks to enjoy it. According to one Child Geek, “This game isn’t hard and it can be fun if people try to be funny.” There’s an important point to make here. While the goal of the game is to attempt to pick a card the Victim will select, the real fun comes in reading the crazy responses the other players have selected and then arguing your position. In many respects, it’s a lot like the very adult-oriented game Cards Against Humanity that is all about selecting the most off-the-wall response as possible and then arguing why yours is the most messed up. Except, in this case, the game won’t make you feel like a horrible person after playing it. In the end, enough of the Child Geeks enjoyed the game to give it their approval, but not all the Child Geeks liked the game. According to one Child Geek who voted against it, “This game isn’t anything new. I don’t think it’s worth getting excited about.” Gads, I’m turning our Child Geeks into Gamer Geeks.

The Parent Geeks thought the game was OK, but were not impressed with it. According to one Parent Geek, “I don’t want to sound negative, but this game really didn’t do anything for me and maybe that’s because I’ve played a lot of games like this. I don’t know…it was just more of the same and that isn’t interesting to me.” Another Parent Geek said, “If I hadn’t played Apples to Apples to death, I would consider this an alright game. If I had never played Apples to Apples, I would think this game is brilliant.” When all the votes were taken, If Only I Had… did not receive enough love to get the Parent Geek approval. 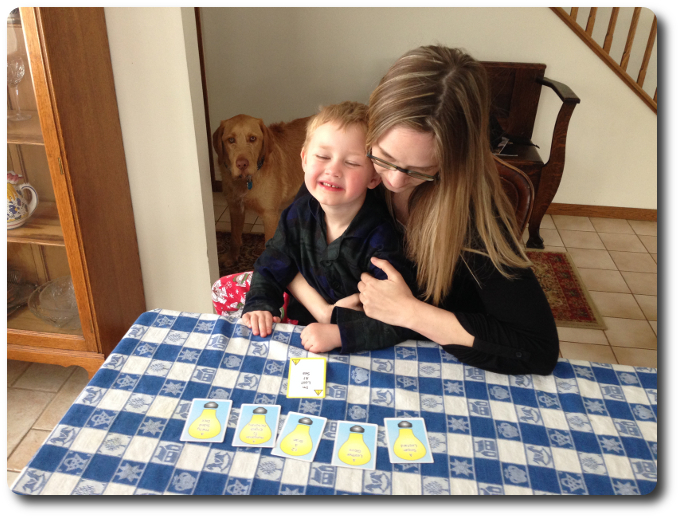 My wife reads the cards out loud, making my 4-year-old laugh. My dog is not amused…

The Gamer Geeks humored me and played a game of If Only I Had… Turns out that might have been a mistake. The Gamer Geeks really, really disliked this game. They claimed it was a blatant copy/paste job not worth the cards it was printed on, totally unoriginal, and a complete waste of their time. Ouch. According to one Gamer Geek, “What really pisses me off is that this game isn’t trying to do anything new – and before you tell me the questions, answers, and arguing is new, Cyrus, shut up – they aren’t.” I could go on, but I don’t think I should. The Gamer Geeks rejected If Only I Had…

Games like If Only I Had… have a difficult time getting much love nowadays. Apples to Apples (since 1999) has taken all the focus and games (with very few exceptions) tend to lose credibility when compared to it. When they are, they are oftentimes seen as blatant ripoffs of the original and kicked to the curb. Is that fair? No, not really, but it’s the reality of the situation that game designers should be aware of.

Personally, this game made me tired. I found it to be lacking originality and heart. I felt like I had played this game since 1999 (the year Apples to Apples was published and entered my life, by the way), which lead me to ruminate about what I could be doing instead of playing If Only I Had... I just went through the motions when playing as did most of the other players.

I would not recommend this game, even to players who are not familiar with Apples to Apples or love Apples to Apples, because the game lacks a certain sense of organization. Everything was way too random where I often didn’t feel like the cards I had in my hand had anything to do with the Scenario card played. And, yes, if I only played this game once or twice, my statement would be highly questionable. But after playing this game over 10 times with different people, I just don’t see anything other than randomness thrown in the box.

I the end, If Only I Had… wasn’t much fun for me and for many of our players. A shame, really. I hope the game designer finds the time to take a hard look at what is in the box and attempts to give us something new. The component quality is pretty good, but the final offering leaves much to be desired.