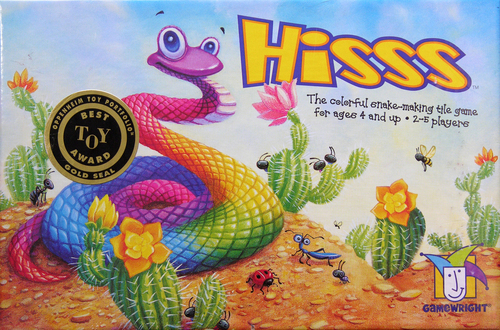 Players take turns drawing cards that represent snake sections in an attempt to “build” an entire snake in the middle of the table. A snake is completed when it has a head, at least one mid-section, and a tail. When a player completes a snake, the cards that formed the snake are places their score pile.

There are 3 types of cards that are used in the game:

A snake section will have a color on it for each uncapped end of the snake on the card. A mid-section will always have 2 different colors, and a head and a tail are only 1 color. The one exception are the “rainbow” colored sections that allow the player to attach it to any other colored section. Color is relevant because you cannot extend, or cap a snake unless the color matches.

When the draw pile is depleted, the game ends and the player with the most cards in their scoring pile wins. Ties are broken by the longest snake claimed.

This game is not a total loss. It does incorporate colors and very simple pattern matching. These are skills that very young little geeks require and can build on. It’s difficult to make this game a good deal entertaining by doing so, but it’s there.

It is a safe prediction that this game will quickly find its way to a garage sale table soon as my little geeks finds something else to distract them, like another game or an activity that is a bit more involved. Possibly even a ball of yarn or rock to throw. Still, as an early development game, it has merit, but will not have much staying power.

We are getting entirely too many positive reviews on this site, so I took it upon myself to be “that guy” to show the other end of family gaming that is all too prevalent when your kids are 2 and 4 years-old. I plan on doing so by highlighting games that are extraordinarily mind-numbing in and of itself for adults, but we play it anyway because it’s just greatly rewarding to see the kids have fun.

Let me be clear. One can have a good experience doing just about anything if the correct attitude is presented. I love playing games with my little geeks. With games like this, I am constantly having to remind myself that I am setting the foundation for relationships with my kids and future gaming where the gaming itself is satisfying rather than just the experience. I urge you to check out Nate’s article, “When I Don’t Want to Play“. This is a review about the game, not the experience gained by playing it with my kids.

As for the game, skip it.  It falls squarely in the corner of mind-numbing. Draw and place, draw and place, and hope the end is near. The winner will be the one who happens to draw the most snake completion cards when they are needed. There are simply better games available on the market today for your little geeks to play. FlipOut, for example, which is all about color matching, pattern matching, and memorization.

Another issue I have with the game is the table space that it can take up. As the snakes grow, one has to constantly shift them around to fit on the table. This breaks the visual memory for young kids because they remember things like “the snake with a open red midsection is near me”. Shifting them around disrupts the memory pattern, not to mention it causes a great deal of consternation at my family gaming table when the snakes get bumped around and cut into pieces.

There is a very small amount of strategy in the game. If you are winning, then you want to close down options as quickly as possible for extending existing snakes. If you have the lead, then you want to make it harder to rake in the cards on the table. Therefore, you want more partial snakes. You do this by choosing to minimize the open colors if you have the choice to do so over opening up a new one. This limits the options for the next card draw to be placed legally on an existing snake. This strategy is complete lost with my boys, but it is there.