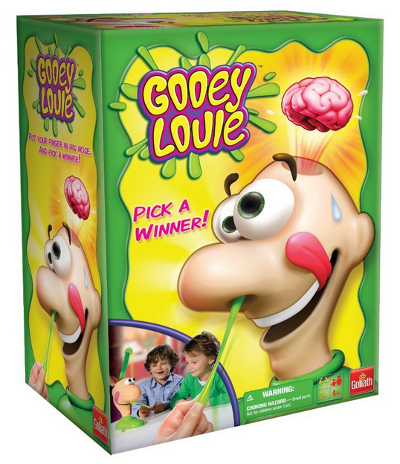 My wife and I did a quick count. We determined we utter the phrase, “get your fingers out of your nose” no less than 10 times a day to our little geeks. Of course, we are only counting the times that we catch them in the act. Nose picking is considered to be rude in many cultures, dirty, and for the young, a means to obtain a tasty treat. Regardless of how you feel about it, we all do it. It was only a matter of time before a game designer looked at society and said, “hey, I can make some money here.”

Gooey Louie, published by Goliath Games LLC, is comprised of 1 plastic cartoon head (of Louie), 1 brain on a spring (that fits into the plastic cartoon head), 1 base (that the head fits into), 12 “Gooeys” (which are soft, stretchy, and green faux boogers), 1 rubber band, and 1 custom six-sided Player Action die. 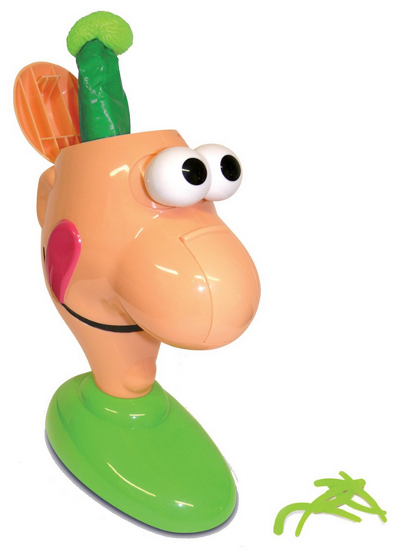 Note: Prior to playing your first game, an adult (or a terrifically skilled and highly talent little geek) will need to loop a rubber band around one of the Gooeys and attach it to a hook that is enclosed in the plastic head. The plastic head also needs to be attached to the base.

To set up the game, first reset Louie’s head. This is done by pushing in his eyes and then stuffing Louie’s plastic brain into the top of his head via small hinged door. I know…sounds terribly violent.

Second, take the 11 Gooeys and stuff them into the small opening above Louie’s nose via an even smaller hinged door.

That’s it for game set up. Pass the dice to the first player and begin!

Picking for a Winner

Gooey Louie is played in turns with no set number of rounds, although one need only do the math to realize that a game’s maximum length will only ever be comprised of 12 turns. On a player’s turn, they will complete the following steps.

During this step, the player takes the custom six-sided die and rolls it. There are 4 possible outcomes of the die roll.

During this step, the player will take their fingers and physically push them up into the nasal cavity of Louie’s plastic head. When the player feels the soft gel-like Gooey, they pull it out. Of course, only players who rolled the action on the Player Action die that allows them to pick the Gooeys need stab Louie in the shnoz.

Once the Gooey is picked, one of two things are going to happen. If the Gooey is not the one connected to the trigger via the rubber band housed up inside the plastic head, the player will have completed their turn and the next player in the turn order sequence will have their turn starting with step 1 noted above. If the Gooey is connected to the trigger, the top of Louie’s head will fly open and the plastic brain of Louie will spring out! Louie’s eyes will bulge out, too, but not once does he stop smiling….

The game ends as soon as Louie pops his brain. Which makes a grotesque kind of sense, when you think about it.

If players are looking for a bit more competition, Gooey Louie can be played using rules that define a victory condition. Game set up and play for this game variant is the same as noted above with one small difference. When a player triggers the brain explosion, they are out for the duration of the game playing session. Gooey Louie is then reset and the remaining players begin anew. When there is only one player left who has not triggered the brain to spring out like the Xenomorph from Alien, they are declared the winner.

To learn more about Gooey Louie, visit the game’s official web site. Yes, a game that is all about picking boogers has its own web site. Oh, don’t look so surprised….

This game is gross, is all about boogers, and features an exploding brain. Of course the Child Geeks will love it. The only way they would love this game more is if it were made of pure sugar wrapped in chocolate and served on the top of their mile high birthday cake. I’m pretty certain the Parent Geeks will tolerate Gooey Louie, at the very least. There is nothing about the game that most Parent Geeks will find worthwhile other than the fact they are playing a game with their Child Geeks.

One need not have access to a crystal ball or a mystic third eye in the center of their brow to know that the Gamer Geeks are not going to approve Gooey Louie.

Teaching the game will take you less time than it took you to read this sentence. Roll the die, pick a Gooey, and pray to your Sinus Gods that you didn’t pull the one attached to Louie’s brain. Rinse and repeat. After I taught the game to my little geeks, I asked them their thoughts on Gooey Louie so far.

My thoughts exactly. Let’s dig deep into this game and see if we strike gold or goo.

The Child Geeks, as predicted, enjoyed Gooey Louie, but did not love it. “Fascinated” is a better term for what I observed. The only Child Geeks who did seem to pay the game a great deal more attention than what I would consider “normal” were the very young Child Geeks. Case in point, my 3-year-old, who could not get over how awesome the Gooeys were. He became very upset when I told him he had to put them back in Louie’s nose. The older the Child Geeks got, the less interested they became. The allure of something gross and boogery certainly grabbed their attention, but the repetitive and all-to-predictable game play bored them. Despite their general lack of interest in the game, they still voted to approve it. According to my 5-year-old, “Dad, this is a game about boogers. Of course I”m going to give it a thumbs up!” So much for objectivity…. 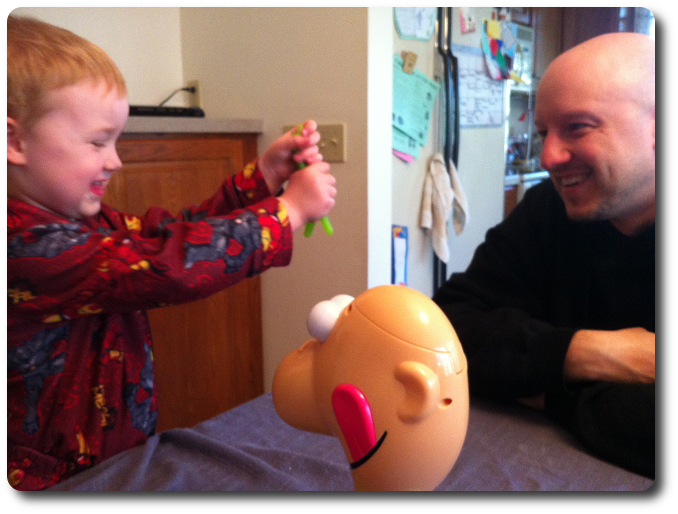 My youngest little geek shows me his hard-earned booger trophies

The Parent Geeks, again as I predicted, tolerated Gooey Louie. According to one Parent Geek, “there is nothing about this game that I enjoy or want to experience, but I’ll play it every night if my children want to.” I wonder if Child Geeks realize how much their Parent Geeks sacrifice for them? Doubtful, but I wouldn’t go so far as to suggest that Gooey Louie is “painful” to play. It’s just very, very simple. The brain popping out makes everyone at the table jump (including the Parent Geeks) and that always gets a laugh. Some of the Parent Geeks felt this was enough to warrant an approval, while others did not. In the end, the Parent Geeks remained mixed and divided on whether or not to approve Gooey Louie.

The Gamer Geeks did not play or show the slightest bit of interest in this game. Good thing, too, because I doubt I’d be able to print any quotes they might have provided.

Gooey Louie is a game driven on two basic principles. The first is luck. There is no way to tell what Gooey will trigger the brain explosion, and as the choices become fewer and fewer, it is simply a matter of time before a player picks the wrong one. The second is that boogers are gross and gross is cool. I recall collecting Garbage Pail Kids Cards as a child and having conversations with my mother about how “gross and inappropriate” they were. Or, more accurately, being scolded and lectured about how gross and inappropriate they were.

I didn’t bother to listen.

CURSE YOU KARMA AND YOUR IRONIC SENSE OF HUMOR! It would appear that it’s now my turn to be putting my hands on my hips, tilting my head to the side, and going on and on about why “this” and “that” is gross and inappropriate. I’m not so far gone or out of touch to realize that I am now my parents. I wish I had listened better to what they told me as I’m sure I could have used some of their argument to strengthen mine. My little geeks don’t seem to be listening to me.

Of course, there is nothing really gross or inappropriate about Gooey Louie, other than the fact it’s simulating picking another person’s nose. Which is, of course, the game’s point. That might be enough for more sensitive parents to avoid the game altogether. As for me, I see no harm in it, but nor do I see much value. I already play more complicated and fulfilling games with all three of my little geeks. Gooey Louie is serving as nothing more than an interesting distraction for the moment that I am sure will soon be forgotten. But for those families who have younger Child Geeks who are just now starting to show an interest in games or a young family who is looking to start their own family game night, Gooey Louie is sure to be a welcome addition to the family gaming library. At the very least, the game will bring people together and laugh. Heck, you might even learn new techniques on how to pick your nose. You’d think that would be enough for everyone, but it’s snot.*