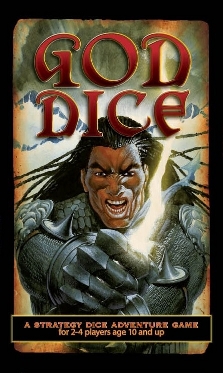 God Dice is a light tactical dice rolling game.  Instead of number crunching, the players match symbols on the dice to patterns that represent special abilities that only their character’s can perform.

A player’s turn is broken down into three phases.

The first phase is referred to as the “Declare Attack Phase”.  On a player’s turn, they can choose to attack any other character.  The character who is attacking is called the “attacker”; the defending character is called the “target”.

The second phase is referred to as the “God Dice Phase”.  The God Dice are two six-sided die that have only letters on them.  The attacking player rolls the dice to determine on who the fickle favor of the mystical gods fall.  This roll could end the battle immediately by flat-out killing the target character, make the attack automatically fail, force the target to change, or provide a slight advantage to the attacking or target player.  Note that a player’s turn could technically end here, denying them a chance to battle one of the other characters.

The third and final phase is referred to as the “Attack Phase”.  The player takes 9 dice (the God Dice are not used during this phase) and rolls them on the table.  The goal is to match a predefined pattern on a character card that does a specific attack action.  The attack actions include “basic” attacks, “battle” attacks (which are more powerful than the basic attacks), “magic” attacks, and “power” attacks.  There is also a “wild” attack which allows the player to choose any attack action they want.

The player has an opportunity to re-roll their dice during the Attack Phase.  To do so, the player selects one value to re-roll.  This value can only be re-rolled once per turn, forcing the player to make a tactical decision on what they should re-roll now or keep for re-rolling later.  After the value has been selected, the player picks up all the dice that show the player specified value and re-rolls them.  The character continues to roll dice until they either match a pattern they want to use, all the dice have been re-rolled, or the player is unable to re-roll any dice.  Note that a player might not get a chance to re-roll one or more dice values if none of them are showing.

When an attack has successfully been made, the target reduces their “Life” value.  If a character’s Life value should ever reach “0” or less, they are removed from the game.  If the target character is still alive, they can be used in future battles.

Play continues until there is only one character left on the table.  That player is declared the winner and goes on to have a victory danish of their choosing. 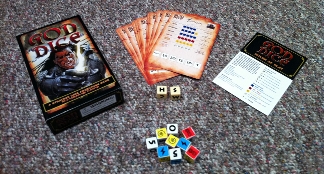 I like to play this game with my kids a lot.  There is very little math required which makes it easy for them to count up the dice and keep the game moving quickly.  The pattern matching is very straight forward and the bright colors make it easy for the kids to quickly see what they have rolled and what they need.

When I play with my two oldest sons, we like to put in sound effects for the battles.  This makes it a lot more fun and we really get into it!  Ever hear a 3 year old make the sound effects of a flaming ball of doom and then laugh hysterically as his father jumps around the table acting like he is on fire?  No? Then you haven’t lived, my friend.

This game uses risk and reward mechanic, as well as tactics.  My sons have to determine when the right time is to re-roll or when to not.  Should they use one of their attacks now or press their luck with another roll? Should they stick with magic or power attacks?  The tactical decisions my sons have to make are light by comparison to more complex games, but that decision making can be a very intense experience for them.

This game also makes for a great quick filler between other games or for a final game of the night.  The mechanics are easy and the game is fast.