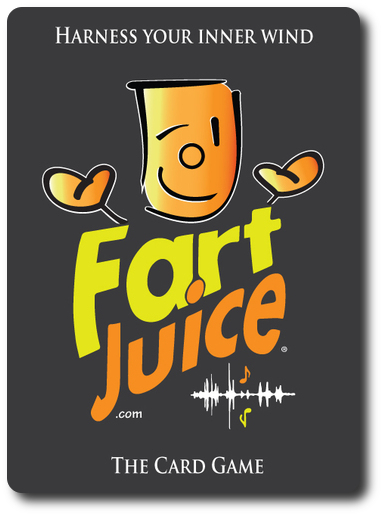 When gas escapes via the exit found on one’s posterior, many refer to it as a “fart”. This escape of bodily gas can be very large in volume and have a strong odoriferous characteristic. In most civilized societies, one excuses themselves or apologizes for “breaking wind”. Kids, on the other hand, find it terribly funny and fart as loudly as possible. This is why I avoid Chuck E. Cheese’s.

Fart Juice, designed by Martin Peter van der Walt and to be published by Osaki Games, is comprised of 132 Fart cards, 12 Location cards, and 1 standard six-sided die. As this is a review of a prepublished game, I cannot comment on the game component quality. The subject matter of the game is rude, crude, and highly juvenile, but I wouldn’t call it offensive. Imagine, if you will, being surrounded by kids telling fart jokes. It’s that kind of comedic mentality that runs deep in Fart Juice. This is not a highbrow game, ladies and gentlemen, but that’s a good thing. This game was invented to help make a child smile who was battling cancer. And smile the child did. Mission accomplished.

Can’t Hold It In? Let It Out in Style!

Note: Game set up and play summarized here is for the Basic game. Information on the Advanced game can be found summarized in the Game Variants section below.

To set up the game, first separate the 14 Advanced Fart cards and return them to the game box.

Second, shuffle the Fart cards and deal 8 to each player, face-down. This is the player’s starting hand. Place the remaining Fart cards face-down in the middle of the playing area. This is the draw deck for the duration of the game. Leave room for a discard pile and a dead pile (cards out of play). Place the die next to the draw deck at this time.

Third, give each player 1 Location card, face-up. These are to remain visible for the duration of the game.

That’s it for game set up. Play proceeds clockwise starting with the first player after the dealer of the Fart cards.

There are 10 different types of cards in Fart Juice. Each are summarized here.

There is little creativity and love in a “Normal” Fart card. These types of farts represent the vast majority of gas released by people everyday. While useful, they provide nothing in the area of pizzazz. 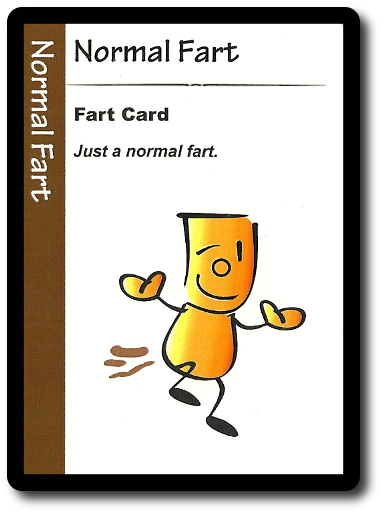 With just a little bit of control and practice, any individual can produce unique farts. The “Secondary” Fart cards represent such farts. Each represents a subtle level of control that ranges from concentrated releases of gas to loud bangs. 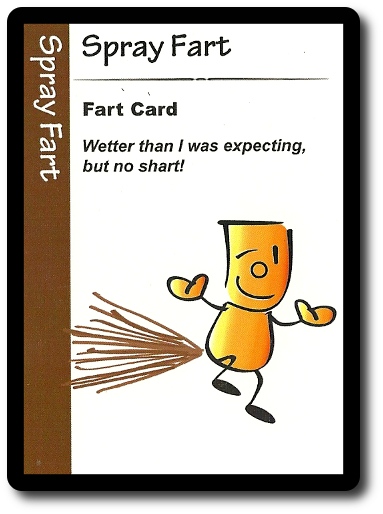 Now we are entering in the realm of true fart aficionados. These farts are only possible if the individual takes their gas releasing seriously and practices. Each “Primary” Fart card is an artistic masterpiece and a true example of mental and physical control. Not for the faint of heart of weak of butt. 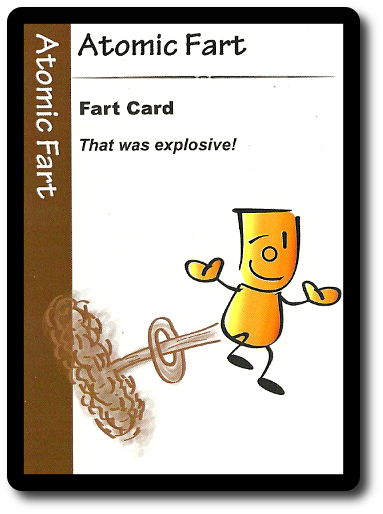 There are always those who push the envelope. Thrill seekers looking to move past life’s mediocrity. “Special” Fart cards introduce us to what is possible if we unshackle ourselves from self-doubt and embrace total bowl control. These farts take a special kind of crazy to attempt, for one little mistake will result in ruined pants. 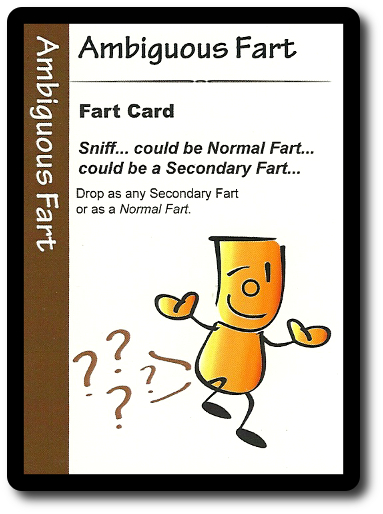 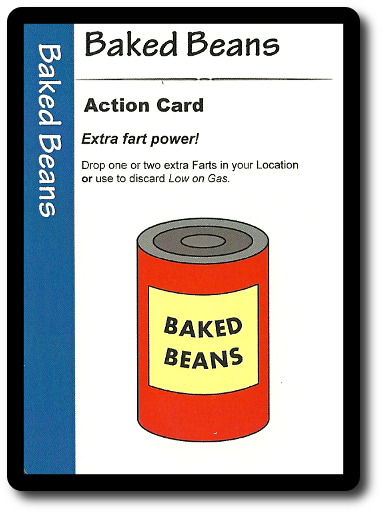 If you push the limits too hard and too fast, something is bound to break. The “Penalty” Fart cards represent the results of a player taking it too far and the consequences thereof. 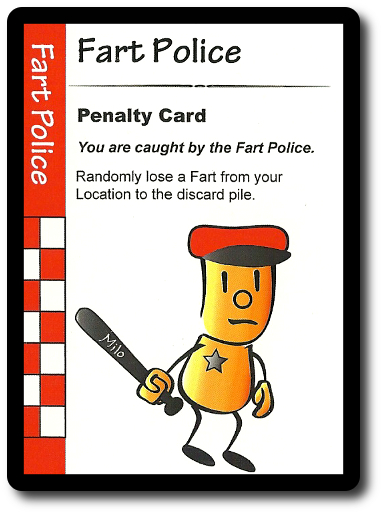 Mistakes happen, and when they do, the results can be a mess. The “Counter” Fart cards protect the player from mishaps, unforeseen stainage, and gaseous attacks. 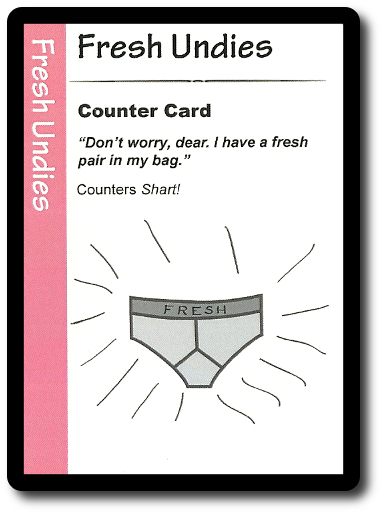 Mustering up gas on demand is no parlor trick. It takes years of dedicated practice to bend, curve, and sway flatulence to one’s will. Even after mastering the most advanced fart, it takes a great deal of concentration not to pass out afterwards. Contraction that can easily be broken. “Interrupt” Fart cards allow players to break the concentration necessary to fart like the Pantheons of old. 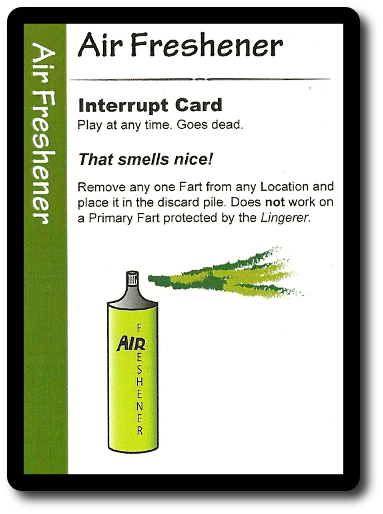 Everyone knows that “he who smelled it surely dealt it”, but those who practice the art of the fart know better. One can, with dedication and sacrifice, make their fart sound like the wind, a bird, and even a ’75 Chevrolet in need of a tune-up. The “Wild” Fart cards can be anything the player needs. 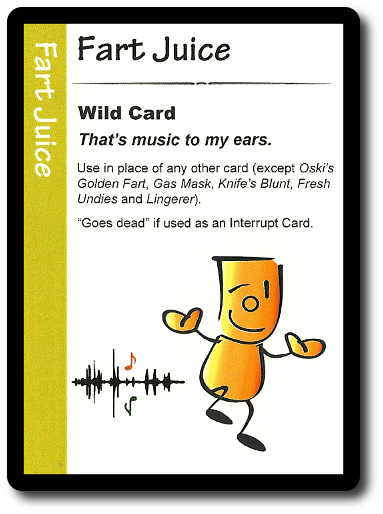 Each Location card in the game is different and informs its owner how many of each listed type of Fart card they need in order to win the game. Fart cards are played to the Location card, face-up, allowing the player to keep track of what they need. It also gives the player’s opponents a great deal of insight.

Farting on an elevator is wrong on many levels…

The Art of the Fart

The below actions must be taken on the player’s turn and in the order listed.

A player may play as many “Interrupt” and “Counter” Fart cards as they like during their turn and out-of-turn when the situation allows it.

The player can only end their turn if they have completed the required actions. Once they do decide to end their turn, they announce it’s over, and the next player in turn order sequence takes their turn.

The game continues as described above until a player is able to play all the required number and type of Fart cards listed on their Location card. This player has won the game.

There are a few game variants available for those who want to turn up the pressure.

If a player drops a real fart during the game (yes, a “real” fart), they are rewarded for their exuberance. The player can take 1 “Normal” Fart card from the discard pile and add it immediately to their Location card.

A small number of cards were removed during game set up. These cards are reserved for the game’s Advanced play that introduces new ways for the cards to interact. While the Advanced play is more rules heavy, it’s not a great deal more complicated than the Basic play. Specific changes include ways cards interact, changes in terminology, and new cards to enjoy.

To learn more about Fart Juice, visit the game publisher’s website or visit the Kickstarter campaign.

The Child Geeks, of course, enjoyed the game a great deal. According to one Child Geek, “This game stinks in a good way!” Additional “punny” commentary included, “The game is silent and deadly”, “If you don’t watch how you control you cards, you’ll mess your pants”, and an untold number of fart sounds. Game wise, none of the Child Geeks had any problems learning and playing both the Basic and Advanced game. They preferred the Advanced game, mostly due to the additional cards, but didn’t notice anything particularly good or bad about either method of play. The only aspect of the game the player’s didn’t like were the “Penalty” Fart cards that felt like an unnecessary way of hurting the player’s progress. As one Child Geek put it, “My opponents are hurting me enough. I don’t need the game doing it, too.” When all the fart sounds, giggling, and games were over, the Child Geeks voted to approve Fart Juice. 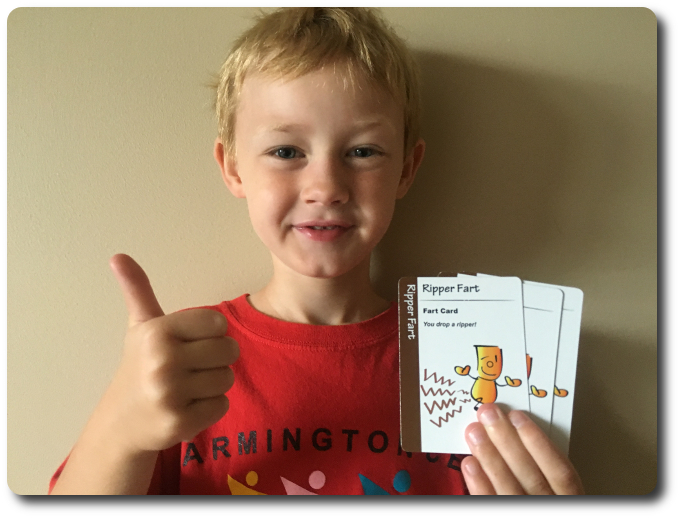 My youngest geek shows me his favorite card…and fart

The Parent Geeks were appalled. One Parent Geek asked, “Why on Earth, Cyrus, would I let my child play this game?” Only when I was asked how the game came about did I share the story of Osaki and his battle with Leukemia, how the game was created to pass the time in the hospital, and the results. This always made the Parent Geeks stop complaining about the game’s theme and narrative. It’s also why I didn’t share the game’s background until pressed to do so. Every parent can sympathize and empathize with Osaki’s parents. This, in turn, makes them more friendly towards the game, which greatly reduces my chances of getting an objective opinion. That being said, those Parent Geeks who learned the origin story of Fart Juice praised it being a lighthearted game and good fun for the kids, while those Parent Geeks who never learned the game’s background dismissed it as being rude and totally unnecessary. The end result was a mixed vote of approval.

Fart Juice is a game for kids and adults who either don’t mind rude childish jokes or enjoy a good fart joke themselves. The game play is very straight forward and lacks much in the way of imagination, resulting in obvious choices. This made the game fun and easy for the Child Geeks who focused more on the table banter than the game, smiling and laughing from start to finish. This, I think, was the game’s true goal. Designed to distract and entertain in equal measure, Fart Juice drew in the Child Geeks and kept them hooked.

For adults, Fart Juice will provide little. It’s not a game with adults in mind, especially those who get offended easily. I won’t go so far as to say that the game is outright offensive, but there are cards that are just plain yucky. For example, the card that portrays a ruined pair of tighty-whities. Altogether unnecessary, but a perfect card within the context of the game.

Overall, I’m not impressed with the game, but my kids are. They tell me I wouldn’t know a good game it if bit me on the butt. This might very well be true, but little about Fart Juice made me smile. Not the case for my kids and their friends, who have been enjoying the game since it was introduced. Who knows, this might be the game for you and yours, too. Breath deep of its game play and see if its aroma pleases your nose or makes you gag.