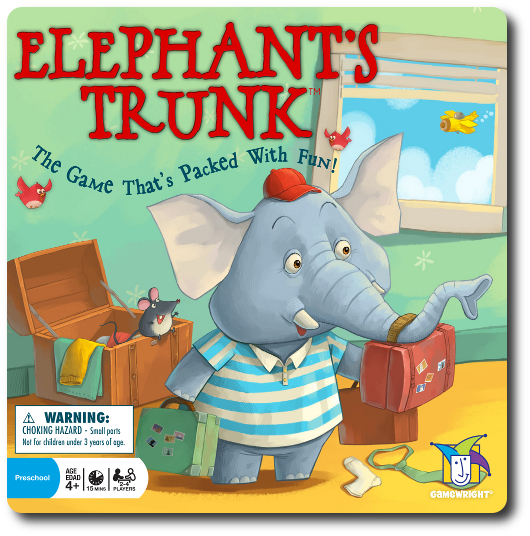 Emmet the Elephant has had enough. Too much stress at the office has finally taken its toll on the poor elephant making him a bundle of nerves and very jumpy. So jumpy, in fact, that his doctor told him he needed to go spend 2 weeks on a beach to calm his nerves. You have volunteered to help your friend, Emmet, pack and see him off for a well deserved vacation. But what Emmet and you are not aware of is that a sneaky mouse is living in those trunks, ready to spring out! Such a surprise would startle anyone, but for poor Emmet, the shock will make him toss all his clothes into the air and make a huge mess. Good thing you don’t have plans for the rest of the day. 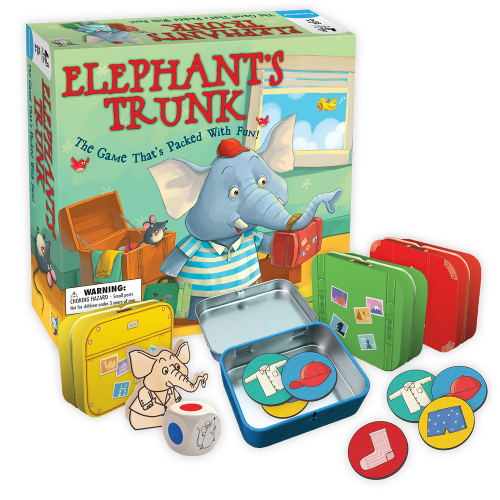 Example of what you get in the game

To set up the game, set out the 4 Trunk tins and arrange them in a circle, making sure they are empty. Now separate the Clothing tokens into four different stacks, one stack per item of clothing. Depending on the number of game participants, give each player a number of Clothing tokens. Any tokens not used are discarded for the duration of the game.

Last, hand the Emmet the Elephant figurine to one player to place in front of any Trunk and hand the six-sided die to the first player.

The game is played with each player rolling the six-sided die and taking an action based on the die roll result. Once the action is resolved, the die is passed to the next player to the left. This continues until Emmet is packed.

The die results will require the player to do one of the following on their turn:

Rolled Result is a Color

If the rolled result is a color, it will match one of the 4 Trunk tins. The player now selects one of their Clothing tokens and places it in that Trunk, closing it and placing it back in the circle when they are done. Which token is used is not important and the token color need not match the Trunk color.

If the Emmet figurine is in front of the Trunk color rolled, the player can place 2 Clothing tokens in the Trunk instead of 1.

Rolled Result is the Mouse

If the Trunk is empty, the player will place the Trunk back in the circle, but will still move the Emmet figurine to the next Trunk, going clock-wise.

As soon as a player places their last Clothing token in a Trunk, they win the game! Emmet is packed and pushed into a cab to be rushed to the airport.

If a shorter game is wanted, a player can take and place a complete clothes set comprised of 1 sock, 1 pair of boxers, 1 shirt, and 1 hat into the game box for the duration of the game. Not a Trunk! A player can do this at any time during their turn.

This is a very simple game that requires the players to match colors. I doubt it will hold much interest for my 7-year-old, but my 5-year-old will still enjoy it. The game is just a bit too advanced for my 2-year-old at this time. Regardless, I taught the game to all three. As expected, my 7-year-old didn’t want to play it and my 2-year-old lost interest about halfway through my explanation, wanting to go play another game instead.

The time needed to teach the game will depend on your little geek’s grasp of colors. The rolling of the dice is the least difficult to explain, with more time and emphasis being placed on “what you do next” after the die stops tumbling. My 5-year-old had no problem understanding the game rules, but let’s keep in mind he plays a lot of games. And so, after hearing he had no questions and was ready to go, I set up the game for our first play. As I did so, I asked him his thoughts on the game so far.

“A funny game with an elephant and a mouse! Can I have the trunks when we get tired of the game?” ~ Nyhus (age 5)

Already thinking of ways to reuse the game pieces, I see. Let’s see if the game is worth keeping together or it is best used for spare parts.

This game was dead simple for my little geek. He was not challenged, but he was entertained. The Trunk tins were a very nice touch as the physical act of opening them and seeing their contents goes a long way to keep the little geeks engaged. The elephant figurine was also a brilliant stroke as it provided a much-needed visual tracking mechanism. It also increased some of the game’s tension when the players knew that the figurine was in front of a Trunk with a lot of Clothing tokens, as no one wanted more clothes.

Perhaps the biggest challenge to your little geeks will be emotionally coping with their disappointment when penalized with more Clothing tokens. A player can be very close to winning only to get a lot more tokens than the rest of the players. Since this is a game where the role of the die determines the player’s actions, there is nothing a player can do to close the distance between them, their opponents, and victory. This can be a real kick in the gut, so to speak. Do take the time to let your little geeks work through their feelings and keep emphasizing “it’s just a game”. You might find it helps a great deal if you make a big show of getting stuck with more Clothing tokens. I would groan, “Oh, no! More underwear!” This made my little geek laugh and reduced his level of disappointment.

Parent Geeks enjoyed playing the game with their little geeks but not the game itself. It is, again, very simple. So simple that it doesn’t take much thinking for an adult at all and can be played if you put your mind on auto-pilot. But that’s not really the point, is it? Playing simple games might be mind-boggling boring for adults, but you should be focusing on your little geek more than your own sense of time dragging on with zero entertainment.

Gamer Geeks had no interest in this game. 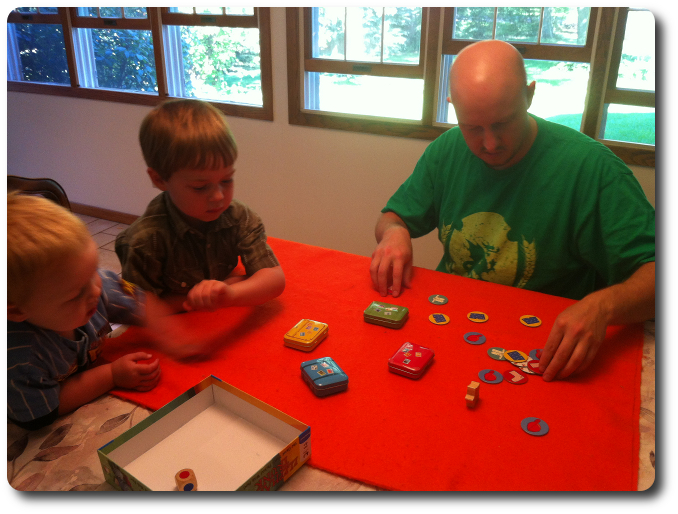 Resetting the game for another chance to beat that pesky mouse!

Gamer Geeks, this is not for you. It is a children’s game. Go away and play something else.

Parent Geeks, this is a very light game to play with your little geeks. It is perfect for learning colors and for very early counting. However, your little geeks might very quickly outgrow it. An excellent early teaching game, to be sure, but do not expect this game to last long. Highly suggest you play this game with your little geeks when they are learning their colors, the importance of order, and to strengthen their emotional coping skills. This game would also be perfect for educators or other school activities.

Child Geeks, this is a fun color matching game that can be played very quickly with friends and family. The only challenge here is correctly matching the color on the die to the Trunk tin. Improve your geek skills by naming the color rolled. If you should get more Clothing tokens thanks to that pesky mouse, don’t take it too hard. You’ll start getting ride of those extra tokens in no time.

Elephant’s Trunk is a solid children’s game and includes excellent game components. Gamewright continues to impress me with their focus on quality and fun. The game itself will be of real interest to parents with young children who are just starting their journey on the Path of the Geek. While the game is easy, it is meant to be a stepping stone. As such, it won’t hold the interest of the players for long. However, what is provides is of value making it a game worth sharing and playing. If you are lucky enough to be raising the next generation of Gamer Geeks, Elephant’s Trunk is an excellent game to help them on their way to higher levels of emotional and cognitive success.