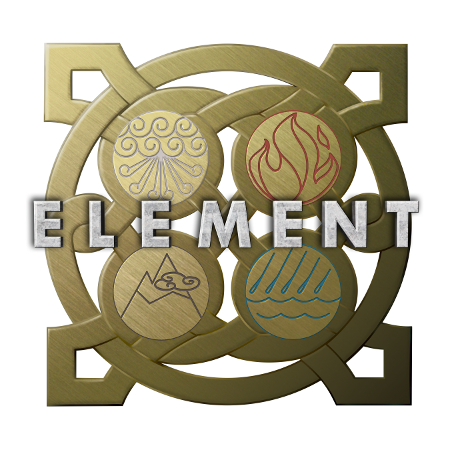 Mahavira, and revered holy figure in Jainism, said “The most important principle of the environment is that you are not the only element.” In this game, players will be moving their wise sages across a board, controlling the elements in an attempt to master their environment. However, such mastery does not come easy and requires attention to their surroundings. Change is constant, but not without structured order.

Element, designed by Mike Richie and published by Rather Dashing Games, is comprised of 4 Sage pawns, 120 Element stones, 1 draw bag, and 1 game board. The game component quality is excellent. The Sage pawns are four unique little statues in various poses, the draw bag has embroidered element icons, and the game board is very thick and durable. The most undistinguished piece in the game are the Element stones, which are not stone at all, but are rather small plastic pucks. They do the job, but feel outclassed by the other components. 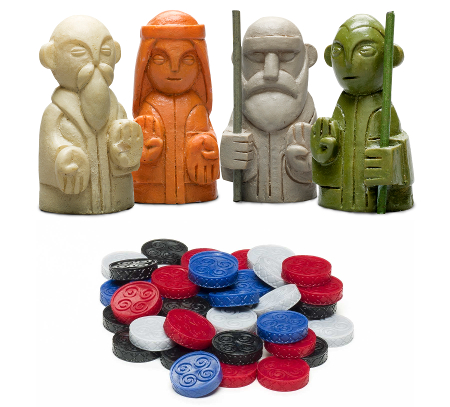 To set up the game, first place the game board in the middle of the playing area where all players can easily reach it.

Second, have each player select a Sage pawn of their choice and place them on the game board. The starting position of the Sage pawns is determined by the number of players and is shown in the rule book.

Third, place all the Element stones in the draw bag and give it a mix.

Element is played in turns with no set number of turns per game. A player’s turn is summarized here.

The first thing a player does on their turn is blindly draw up to four Element stones from the draw bag. However, a player need not draw any if they like. The number of Elemental stones they draw will determine how many they will be able to place to the game board, but any they do not draw will give them an extra move with their Sage pawn. By default, every player can move their Sage pawn one space on the game board. For every Element stone they do not draw, they gain one additional move. For example, if the player only drew two Element stones, the player would be allowed to move their Sage pawn a total of three spaces.

Any Elemental stones drawn are placed in front of the player for all to see before the next step of the game.

By default, as noted, a Sage pawn can move only one space in any direction (orthogonal movement), but only if that space is free. Opponent Sage pawns and Element stones (for the most part) block the space from being moved into. This is intentional as the goal of the game is to “trap” the opponent’s Sage pawn by making sure no movement is possible. The one exception is the “Wind” Element stone, which does not block movement. Instead, it enhances it by allowing the player to “jump” over the a space containing a “Wind” Element stone in the same fashion as one would jump an opponent’s piece in Checkers. If the player jumps over a space that contains two “Wind” Element stones (referred to as a “Whirlwind”) the player’s Sage pawn moves two spaces. In all cases, the player must be able to end their movement in an empty space.

Element stones can be placed to any free space on the game board or replace an existing Element stone using the Rule of Replacement. The rule states that Fire replaces Wind, Wind replaces Earth, Earth replaces Water, and Water replaces Fire. To complete this action, the player takes the previously placed Element stone off the game board (returning it to the draw bag) and places their drawn Element stone in the now empty space. 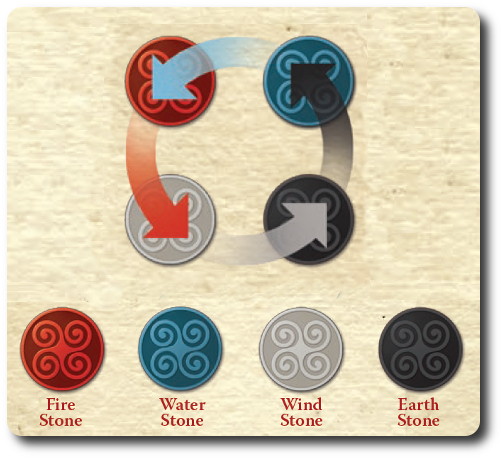 Element stones interact with each other. This is the most important aspect of the Element stones (other than the Rule of Replacement) and needs to be understood by the player if they hope to defeat their opponent.

Or, if you like, “Fire” spreads, “Water” flows, “Earth” is fixed, and “Wind” propels. That’s an easy way to remember how the elements work in the game.

When placing an Element stone (either using the Rule of Replacement or placing the Element stone to a free space), its effect on the game board is resolved before the player can continue their turn. This means that a player needs to decide not only how best to use their drawn Element stones, but also when.

The player’s turn is over after they have placed all their drawn Element stones and no longer want to or cannot move their Sage pawn.

The Trappings of Nature

To learn more about Element, visit the game’s web page.

The Child Geeks walked away from Element with mixed emotions. While all of our younger gamers understood the game play, its abstract nature was difficult for some of them to work with. According to one Child Geek, “I understand how all the pieces work, but I always feel like there isn’t enough room to do anything in the game.” The game board can be quickly filled up with game pieces, which is intentional. The longer the game plays, the harder the moves. Another Child Geek said, “I enjoyed it. It makes you think and is fun to control what happens on the game board.” This Child Geek understood how the Element stones interacted and played a stronger game as a result. In the end, an individual Child Geek voted to approve or reject the game based on their personal “feelings” of how the game was playing out in front of them. For those who saw Element as a game that could be controlled, they gave it two thumbs up. For those who saw Element as a game that was out of their control, they gave it two thumbs down. This resulted in a mixed endorsement by our Child Geeks.

The Parent Geeks, on the other hand, all enjoyed it. According to one Parent Geek, “Great stuff! I especially like how all the players are playing the game at the same time, but you are really only working toward taking out one opponent.” The Parent Geeks quickly learned this truth and one other. Players could give the victory to an opponent by accidentally trapping the wrong Sage. As one Parent Geek put it, “You need to watch our neighbor’s pawns as closely as you watch your own.” Well put and true. To win, you only need to trap you neighbor to your right. Trap others and you end up winning the game for an opponent. No fun. What was fun was the game and all the Parent Geeks agreed to give it their full endorsement.

The Gamer Geeks liked the game’s looks, feel, and how the Element stones interacted. They also liked how the game quickly progressed from “this is easy” to “holy crap, this is hard”. As one Gamer Geek put it, “You start the game feeling like it is way to easy to duck and dodge, but as you keep playing, you start to run out of room and you end focusing fully on making sure you can survive for just one more turn.” The Gamer Geeks felt that Element was a lighter game, perfect as a filler, starter, or ender for their gaming evenings. According to one Gamer Geek, “Games like this are perfect for when you want a mental challenge, but don’t want to put the physical work into it.” When all the games were over, the Gamer Geeks agreed that Element was a game they’d play again.

One aspect of the game I enjoyed is never mentioned in the game rules, but becomes apparent whilst playing. When engaging in a game with three or more players, opponent’s pawns become one additional blocker on the game board. Recall that you cannot win the game unless the Sage pawn belonging to the opponent to your right is blocked. It says nothing about your other opponent’s pawns. This can be used to your advantage, moving Element stones around other Sage pawns to create barriers that cannot be jumped through. Truly, every piece in the game is part of the puzzle. Some you can manipulate, some you cannot. But you can use them all.

Of course, this also means players have to be really careful not to accidentally trap an opponent who is not their target. Doing so will make it easier for another opponent to win. This makes placement of the Element stones and their movement around the game board a not-so-easy task as the game board begins to become more and more populated with Element stones. One must think not only of their own space around their Sage pawn, but also take into consideration how much wiggle room they are leaving their opponents. As the game progresses, open territory becomes less and less available, making each decision more and more difficult.

Abstract strategy games can be hit or miss. It all depends on the crowd. Some players want an immersive and visual experience, where others are content to engage the game with as few distractions as possible. Element does a nice job of providing a visually appealing aspect to an otherwise very abstract game. The game is neither too difficult or too heavy. It works great as a filler or as casual game where players can still visit and play at the same time without limiting either. Regardless if you are playing with four or only two players, the game engages at a level that keeps you focused, but is not demanding of your attention. Best of all, the game is as difficult as your opponent. Play against a master and Element is going to be a tough game to win. Play against a novice, and expect much lighter game play.

Do try Element when time allows. It provides the mind an entertaining and challenging distraction, allowing you to slow down and enjoy the moment with friends and family.