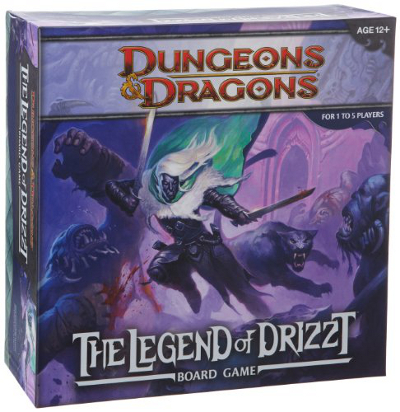 Dungeons & Dragons: The Legend of Drizzt is part of a series of dungeon crawl board games set in the Dungeons & Dragons world published by Wizards of the Coast. The other games currently in the series are Castle Ravenloft and Wrath of Ashardalon. This game is full of “goober”, as the good folks at The Spiel podcast would say: 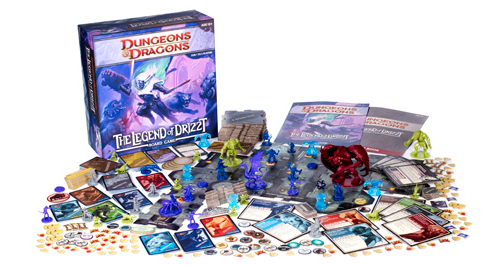 That’s a lot of bits!

Each player selects one of the available heroes at level 1. Each character has a selection of powers (special abilities or spells) to choose from.

Each adventure scenario specifies a starting layout of dungeon tiles, with the remainder shuffled, usually with an objective tile (a location seminal to the “plot” of the adventure) inserted near the bottom of the tile deck. Heroes are placed freely within the designated starting area by their owning players, three decks of cards (Monster, Encounter and Treasure) are shuffled, and away we go!

Fortunately, the sequence of play is also simple. There are three phases to a player’s turn:

During which a player moves his hero (orthogonally or diagonally a number of squares up to the hero’s speed value) then attacks an enemy, or attacks then moves, or moves twice. By default, attacks are melee, meaning that they target an enemy on an adjacent square, but some attacks are ranged. Resolving the attack is a matter of rolling the die, aiming to equal or exceed the target’s armor class (after accounting for modifiers). Damage is pre-specified based on the attack used. In other words, the severity of damage is not random. If a monster is defeated (damage dealt equals or exceeds its hit points), then its card is added to the party’s pool of experience points and the player draws a Treasure card.

During which a new tile is added if the hero stands on the edge of the explored map. A Monster card is drawn and the corresponding monster is placed on the new tile.

During which bad stuff happens! If no new tile was explored, or if the new tile is marked with a black triangle, an Encounter card is drawn. Usually this means additional peril for our intrepid adventurers. If the villain (the “boss” as referred to in video games) has been activated (according to the instructions for that adventure scenario) then it moves and/or attacks according to the instructions on the corresponding Villain card. Then any monsters or traps revealed previously by the current player also move and/or attack according to their instructions. If a hero takes damage equal to their hit points, the hero takes no further part in the adventure. Fortunately, the party begins each adventure with one or two Healing Surges: opportunities for heroes to regain some lost hit points.

A hero progresses to level 2, thus obtaining improved stats, if the player rolls a natural 20 and the party has acquired enough experience points to pay for the progression.

An adventure ends when the villain is defeated or when all heroes are defeated. The specifics are detailed in each aventure scenario.

To learn more about Dungeons & Dragons: The Legend of Drizzt, see the game’s official web page.

The publisher’s recommended age is well in advance of my own children’s, 5 and 7-years-old. Even so, I felt that they would enjoy the Dungeons & Dragons theme, the monster, and villain miniatures.

I was pleasantly surprised by the simple rules. The variety of different monsters and character classes is achieved through the use of cards that extend the rules. This creates a high dependence on player literacy, but I am fortunate that both of my children have elite reading skills and are not afraid to use them!

The most appealing aspect, however, was that this is a dungeon crawl that does not require a Dungeon Master (a player who controls the monsters and dungeon events). We have always enjoyed fully cooperative games like this, taking care to play at a leisurely pace and ensure that all players are contributors rather than spectators.

I have played this three times so far, all three games with my son and twice with my daughter. I was very impressed by the quick set-up. It is always a bonus to start playing 5 minutes after opening the box, not including time required for rules explanation.

My children did not pay much attention to flavor text, preferring instead to focus on the nuts and bolts of beating the snot out of monsters. I had the same experience with Mansions of Madness, although in that game there is a greater disadvantage if players overlook important clues or victory conditions. Despite being inexperienced in role-playing or fantasy, they were intrigued by the miniatures.

My son reveled in the idea of combat, and furthermore he relished the challenge of understanding each character’s special powers, then determining the optimal way to deploy these tactically. The combat appealed less to my daughter, although I would not say she was actually averse to it, but she needed much more assistance with reading and general play. Thus, her interest waned more quickly. 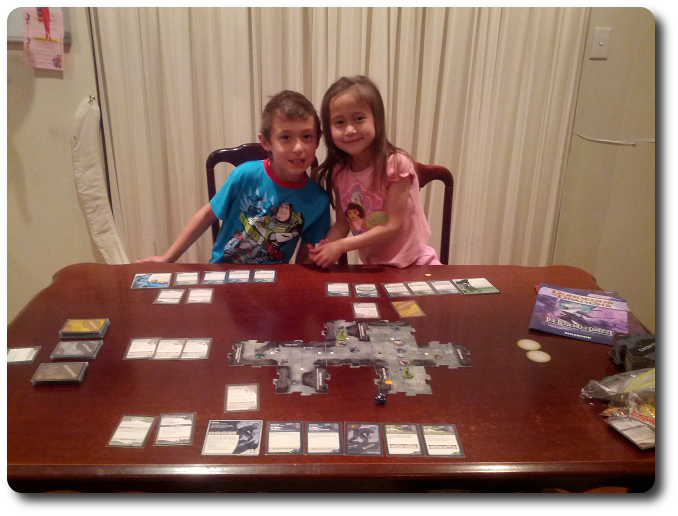 My little dungeon explorers hard at work slaying and looting!

Gamer Geeks will find the gameplay lacking in subtlety and depth. Optimising a strategy based on current board position is quite straightforward, and anticipating future developments is not that much harder. Even so, defeat could come through bad luck.

Some Parent Geeks may hesitate to play a game that encourages violence. Fortunately, there is no explicitly violent imagery in the game. On the positive side, the game encourages team-building and good communication between players, especially gratifying if siblings are playing.

Child Geeks are going to love the miniatures. Although plastic and unpainted, they are attractive and seem quite sturdy. This is always important when young children are involved! Children with previous Dungeons & Dragons or high fantasy game experience might enjoy this slightly more, but it is suitable for role-playing neophytes, too.

3 Responses to Dungeons & Dragons: The Legend of Drizzt Game Review