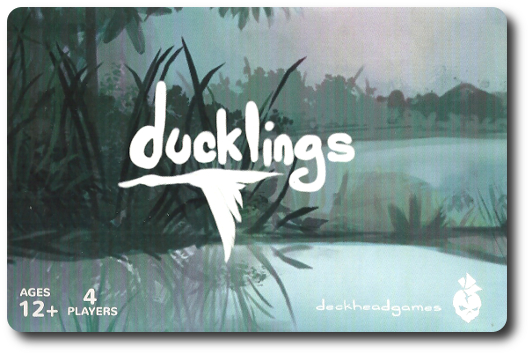 Jane D. Hull, former politician and educator, said “At the end of the day, the most overwhelming key to a child’s success is the positive involvement of parents.” As a parent of three Child Geeks I can attest that parenting is the hardest and the most rewarding job I have or will ever have. In this game, be you a parent or not, you get to protect three little ducklings from a world hellbent on their demise. Their survival is completely based on your actions.

Ducklings, designed by James Collins, Aimee Elaine Zhang, Timothi Lim, and to be published by Deckhead Games, will reportedly be comprised of 4 Parent Duck cards, 6 Duckling cards, 18 Affliction tokens, 52 Biome cards, 1 standard eight-sided die, 1 standard six-sided die, and 1 standard four-sided die. As this is a review of a prepublished game, I cannot comment on the game component quality.

To set up the game, first separate the players into two teams comprised of two players each. Have the players on the same team sit next to each and opposite of their opponents. Give each player one Parent Duck card. These cards should be folded so as to allow them to “stand” on the table while in play.

Third, create a path by placing the “Lake” Biome card on one side of the table and the “Pond” Biome card on the opposite side. The remaining Biome cards are now used to connect the Pond and Lake together, placed randomly and face-down. There can be one path or several, as long as the available paths are the same length.

Fifth, place the game dice and Affliction tokens to one side of the game playing area.

Birds of a Feather

Ducklings is played in turns with no set number of turns per game. A player’s turn is summarized here.

Note: Duckling cards have a one-time ability that can be triggered during the game whenever it makes the most sense to do so. When the Duckling card’s ability is used, it’s tilted sideways to indicate that the ability is no longer available. 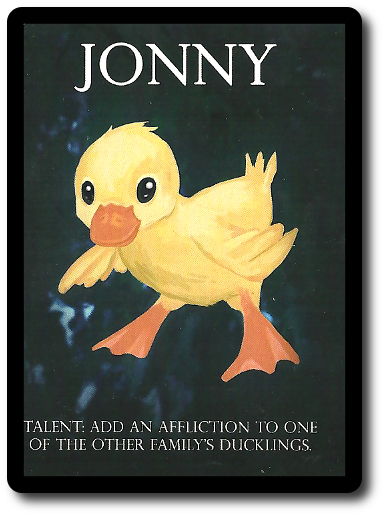 All players begin the game rolling the four-sided die to determine how many spaces (read: cards) their Parent Duck card moves. The four-sided die is rolled first to thematically represent how difficult it is to escort three baby ducks. As the players lose ducklings, they will be able to move faster due to the reduced logistical difficulty. The number rolled represents the total number of spaces the players can move their Parent Duck cards, but players are never forced to move the full amount.

Players will be moving their Parent Duck cards through different biomes (Cities, Fields, Forests, Mountains, and Roads), with the ultimate goal being either the Pond or the Lake, depending on where they start.

Depending on the card space the player’s Parent Duck lands on, it’s now resolved accordingly.

Unflipped Biome cards are flipped over and immediately resolved. If the Unflipped Biome card has a symbol of an Affliction, one matching Affliction token is taken and placed by the player on any of their Duckling cards. The players’ team then determines which of the two possible effects are triggered. If it’s not possible to resolve one of the listed effects, the other must be selected. If the effect moves the Parent Duck card to a new Biome card that has not been resolved, it too is flipped over and resolved. This could create a chain of effects. 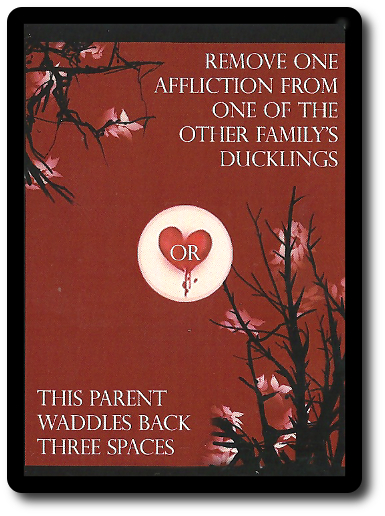 Flipped Biome cards no longer require the player to select one of the two effects to resolve. However, they still give the player the noted Affliction that must be added to one of their Duckling cards. If two Parent Duck cards are on the same flipped Biome card, they engage in combat, fighting for the right to claim the current territory. Each team selects one Duckling card to place an Affliction on, in addition to any Afflictions already given when the Biome cards was landed on.

This completes the player’s turn.

As soon as one team reaches the end of the path to land on their designation, winter hits. The team still attempting to travel the path and reach their destination suffer one additional Affliction on their turn, which thematically is suppose to represent the harsh winter conditions.

To learn more about Ducklings, visit the games website or Kickstarter campaign.

The Child Geeks had a good time with this game, but found it emotionally difficult to determine which Ducklings would be given the Afflictions. According to one Child Geek, “I don’t like that I have to hurt my baby ducks.” The Child Geeks were made to understand that the Ducklings were more like “gears in a machine”, rather than fluffy little balls of cuteness. This helped a bit, but it was obvious that the Child Geeks didn’t care for the fact that they had to “hurt” one of their baby ducks. As one Child Geek put it, “If this is what it means to be a parent, I think I won’t become one.” Despite the fact that the Child Geeks had to make some difficult choices when it came to their baby ducks, they found the majority of the game to be fun and challenging. We always played with half a deck, which kept the games short and intense. When all the ducklings returned to their homes (or didn’t), the Child Geeks voted to approve Ducklings.

The Parent Geeks didn’t have any hangups afflicting their baby ducks, but they did have some difficulty decided which duckling to put the hurt on. According to one Parent Geek, “What I like about this game the most is its simplistic game play with the added difficulty of making some rather serious decisions regarding what abilities to lose.” The Parent Geeks found the game play to be fairly straightforward and really enjoyed the act of sacrifice that each player had to make on their turn. As one Parent Geek put it, “I wouldn’t say this game captures parenting as a human, but I can easily tell the life of a duck is all about making some very difficult choices.” When all the games were over, the Parent Geeks found Ducklings to be a game they enjoyed with both their fellow parents and their children, giving the game their full endorsement.

The Gamer Geeks were not impressed. According to one Gamer Geek, “This is one step above Candy Land, as far as I’m concerned. Roll to move and resolve the space. No thanks.” Another Gamer Geek said, “While I like how the players have to decide which abilities to eventually lose, I find the overall game play to be too simplistic. Very little thought needs to go into my turn other than where to place afflictions.” None of the Gamer Geeks found Ducklings to be particularly interesting or engaging, suggesting that the overall game would be good for kids and families, but not with gaming elitists. When all the ducks had woddled their last waddle, the Gamer Geeks decided to reject it.

Ducklings challenges the players to make two important decision without ever really pushing the player to make any choice at all. The first choice the player needs to make is whether to take their Ducklings to parts unknown or to known dangers. There is risk involved here, and like all risk-reward games, the players will be given a choice to push their luck and roll the dice or take a safe bet with known outcomes. The second choice is where to place afflictions. This is easy at first, since none of the Ducklings are harmed. As the game progresses, the player will have to start managing their Ducklings like a resource, deciding which will get ever closer to being removed from the game.

The game slowly and steadily ramps up to a point where choices are difficult and sacrifice is a must. This was a nice touch by the game designer, as the journey always starts out pretty much OK, but eventually becomes more and more difficult. Note that the game play itself never changes, keeping the game turns focused and quick. What does change are the choices that need to be made and the consequences thereof.

Overall, I am not particularly pleased or displeased with the game. Like the Gamer Geeks, I found Ducklings to be too light to be of much interest to me as a gaming elitist. As a Parent Geek, however, I found Ducklings to be an entertaining game to play with my family. Watching my kids make some difficult choices made the game very interesting and the need for team communication elevates the game to an exercise in cooperative game play that requires genuine team work. While I do not believe that my children (or any of the Child Geeks we played with) gleamed insight about parenting, I do know that all our players left the gaming table with a better understanding of how fragile ducklings (and kids) can be. This had no overall impact on the player’s everyday life, but it did get a number of mentions, suggesting that the players understood that the game was all about making tough choices and moving forward no matter the odds. That is, in itself, a game worth playing and sharing.