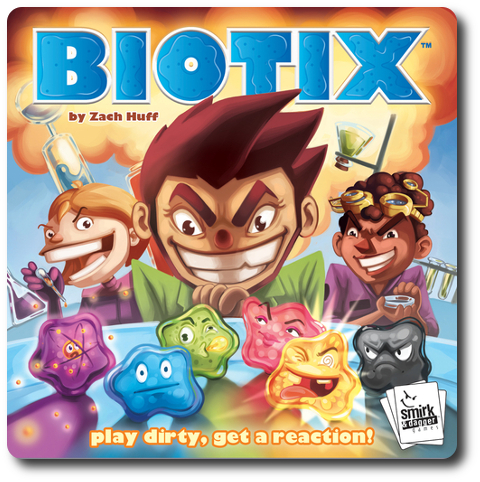 Denis Diderot, a French philosopher, art critic, and writer said, “There are three principal means of acquiring knowledge… observation of nature, reflection, and experimentation. Observation collects facts; reflection combines them; experimentation verifies the result of that combination.” In this game, players will be mixing and matching different meeples to create a big win or a big bang.

Biotix, designed by Zachary Huff and published by Smirk & Dagger Games, is comprised of 1 Bio-Containment box, 1 Specimen bag, 40 Biotix meeples (in 6 different colors), 1 Timer token, 5 Petri Dish cards, and 3 Biotix Characteristic cards. Included with the game is a sticker sheet and instruction on how to apply the stickers to the Biotix meeples. However, it’s not necessary to apply the stickers to the meeples to play. Not included with the game, but necessary to play, is a pen or pencil and some paper to record players’ scores.

To set up the game, first give each player 1 Petri Dish card. The side of the card used will depend on the number of players in the game. 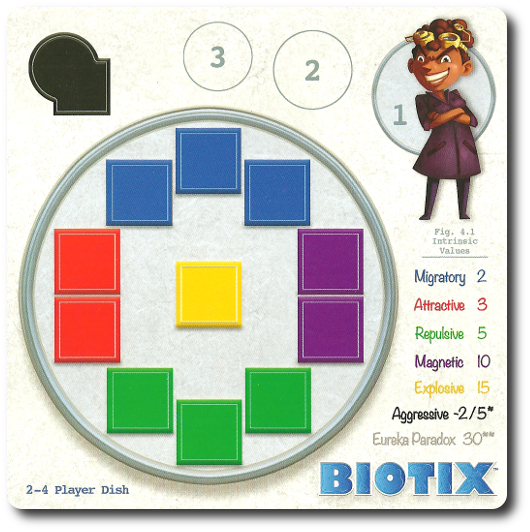 Second, place all the blue, red, green, purple, and yellow Biotix meeples in the Specimen bag.

Third, determine which player will go first and give them the Timer token. This is placed on the player’s Petri Dish card.

Fourth, place the Biotix Characteristic cards as needed (for player reference only).

That’s it for game set up. Let’s experiment!

Biotix is played in rounds and turns for a total of 3 rounds of game play. A player’s turn is summarized here.

The first thing the player does is draw 2 Biotix meeples out of the Specimen bag at random and without looking.

Each time a Biotix meeple is placed, players check to see if there is a “bio-reaction”. Bio-reactions occur when a specific number of colored Biotix meeples are placed on a player’s Petri Dish card. The action to be resolved depends on the Biotix meeple that triggered the bio-reaction.

Note: When a Biotix meeple is “trashed”, it’s placed aside and is temporarily out of the game. It’s not put back in the Specimen bag. The Bio-Containment box can be used to collect the trashed Biotix meeples.

Each time a bio-reaction is triggered, it must first be resolved, which could create another bio-reaction. When there are no more bio-reactions to resolve, the player may continue their turn.

This step is only taken if the current player has the Timer token. If they do, they move the token one space down, counting down. Once the Timer token reaches the end of the countdown, it’s placed in the Specimen bag.

This completes the player’s turn. The Specimen bag is passed to the next player who takes their turn starting with step 1 noted above.

If after the end of the second round a player is 20 or more points behind the leader, they can attempt to catch up by guessing a Biotix meeple color and a number between 1 and 3. This is written down and hidden under the player’s Petri Dish card. This is referred to within the game as the “Eureka Paradox”, which is later resolved at the end of the game.

At the end of the third day (third round), each player tallies up their score as normal and then adds the scores of all three rounds together to determine their final score. If a player participated in the Eureka Paradox, they now show the piece of paper to their opponents and collect bonus points if they have the exact same number and color of Biotix meeples on their Petri Dish card. The player with the most points wins the game.

To learn more about Biotix, visit the game’s web page.

For the most part, the Child Geeks don’t normally get excited or enjoy games that have a high degree of “take that” player interaction. Biotix is all about skunking the other players either through clever meeple plays on your own card or dumping meeples on an opponent’s card. What saved the game from being poo-poo’ed by the Child Geeks was the randomness that comes from drawing a Biotix meeple blindly from the Specimen bag. This ensured that the players could only ever react to what they drew, instead of purposely targeting a specific opponent. According to one Child Geek, “I like the game, I guess. I don’t like it when people put junk on my card, but I like how fast the game plays.” Another Child Geek said, “I like it. It has just enough player interaction to be fun and enough problem solving to keep me happy.” When all the Child Geeks were done messing about in the lab, they voted to approve Biotix.

The Parent Geeks were fans of the player interaction, but not so big on the randomness. According to one Parent Geek, “I really enjoyed how you could play off of other opponent’s cards and force their hand. What I didn’t like is that I was always drawing meeples in the dark, not being able to do what I wanted to do at times.” Another Parent Geek said, “A neat little game. A little light at times and a bit random, too, but I think it works great with the family and friends as a casual game.” Again and again, the fact that the meeples were always drawn blindly and randomly seemed to irritate the Parent Geeks. This, however, should not suggest that the Parent Geeks were displeased with Biotix. They decided to fully endorse the game in the end.

The Gamer Geeks didn’t care for the randomness and found the player “take that” interaction to be mediocre. According to one Gamer Geek, “A pretty forgettable game, in my opinion. It combined random gathering of resources and then pinned meaningful actions to what you collected. The problem there is that the player doesn’t have any control over what they can do other than hopping they get something that works.” Another Gamer Geek said, “I think the game would be great with my family and kids, but I didn’t enjoy it much with my peers. I’d give it a solid thumbs up for the casual players, but us elitists were a bit bored.” The Gamer Geeks voted to reject Biotix.

Biotix is a pretty straightforward game, but it does require the player to think ahead. Not a great deal, mind you, but enough to challenge the player to consider the chain of possible consequences based on their meeple placement. For example, if you give an opponent a meeple that triggers a bio-reaction, the player better know what the outcome of the reaction might be or they might find themselves caught up and made a victim of their own tactics. I liked this and I think it made the game interesting, as the chain reactions could go around the table a number of times, completely changing the landscape and possible scores to be earned at the end of the round.

I do agree with the Gamer Geeks, however. The game has just a little too much randomness in it to make me feel like I have control over my own destiny. I cannot pull specific meeples out and work on the best possible timing to exploit them. In some respects, this simulates that blind research and experimentation going on in the game’s virtual lab. Players do not know exactly what they will be creating until it’s created. Not the best situation for those who crave strategy and tactics, but it does make for some very interesting and rememberable game play moments at the family gaming table.

I’d recommend Biotix to families and older Child Geeks. The game is deep enough to keep players engaged and light enough to never feel overly complex. A nice addition to your family game night or whenever you want to go mixing dangerous chemicals at random.

This game was given to Father Geek as a review copy. Father Geek was not paid, bribed, wined, dined, or threatened in vain hopes of influencing this review. Such is the statuesque and legendary integrity of Father Geek