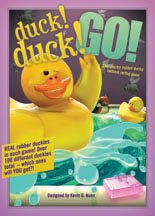 duck! duck! GO! is a bath-tub rally using real rubber ducks. The race takes place on a modular hexagonal grid and a variety of race layouts are provided in the rules for varying player numbers and difficulties. Players take turns to move their ducks using cards from their card hand. The goal is to be the first duck to visit all three buoys (checkpoints) then reach the drain (finish line). Inevitable collisions with other ducks or with the edge of the board, referred to as – I kid you not – “duck bonking”, result in the moving duck facing in the direction opposite to that traveled. This encourages deliberate obstruction of opposing ducks, a tactic I like to call “screwing other players”.

Players maintain a hand of three move cards, drawn from a common deck. Each card shows a path of hexes (occasionally there is more than one option) the duck must take relative to its current position and facing, and also indicates which directions (usually more than one option) the duck may face in preparation for the next move.  Optional advanced rules provide for a non-player-controlled “bird dog” that represents an additional nuisance to the players (but we’ve never used these rules).

The basic game is simple in concept; in practice, though, moving ducks in all directions on a hex-grid is a bit of a brain-burner. (It is good practice to place your move card right next to and aligned with your duck in order to execute the move correctly, or else to realize that you are about to make a huge mistake.) Overshooting a target by a single hex can be a fatal error, but even if he is careful to avoid such a miscalculation, a player might be cursed with a hand full of unhelpful move cards, or foiled by the aforementioned screwage! Most of the time, though, you will stay out of trouble by planning one move ahead and opting for flexibility over breakneck speed.

We pull out this game occasionally, perhaps once every two weeks, and we often manage to convince my parents or brother to join in. We stick to the simpler boards for a shorter game. Both of my children require some assistance with moves, more so the younger one (3 years old) who always partners with an adult rather than playing in her own right. I must admit that most of our games end up as semi-cooperative affairs, played with open hands so that the group becomes focused on bringing all the ducks home quickly.

The goal is straightforward and the rules are simple, so introducing new gamers is a breeze. The game runs a little longer than our usual fillers, but does not overstay its welcome. If you’re after a more cut-throat, take-no-prisoners affair, then this game can be played that way too. And those ducks are so cute, who can resist? 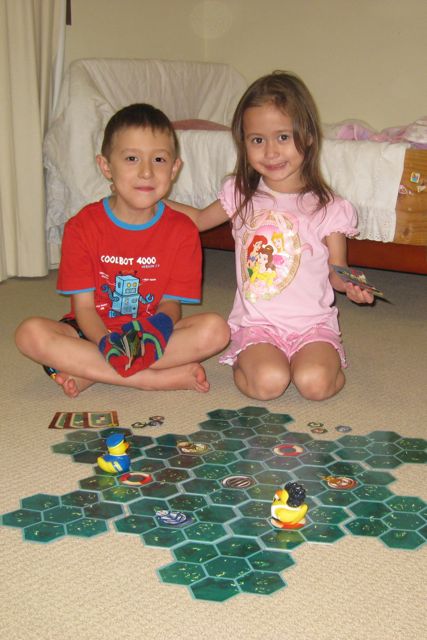 Tense race for the finish