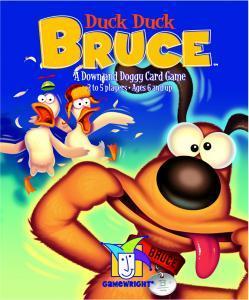 The components for this game include a deck of 60 colorful cards, divided into 10 suites, depicting ducks in different surroundings; 6 “Bruce” cards depict a dog chasing a duck; a single six-sided die with the values “3”, “2”, “1” and “-1”; one instruction booklet (not shown below).

Duck, Duck, Bruce is at its core a “push your luck” game with a dice rolling mechanic thrown in for good measure. The players are attempting to collect the highest card values they can for the ten suites in the deck. The card values for each suit are two “1” value cards, two “2” value cards, one “3” value card, and one “4” value card for a total of 6 cards per suit.

If the player reveals the Bruce card, they shout “BRUCE!” and their turn immediately ends. All the cards that have been revealed in the row are discarded (presumably driven off by Bruce). While this is most certainly the worse possible card to be dealt, it does provide the player the opportunity to interact with other players. Once all the cards played in the row have been discarded, the player chooses one opponent  at the table, announces a number 1 – 3, and rolls the die. If the number the player announced is rolled (for example, the players says “2” and the dice value rolled is “2”) the player takes that many number of cards at random from the opponent’s deck. If the number rolled does not match, nothing occurs. If the value “-1” is rolled, the opponent gets to take 1 card at random from the player’s deck.

Once all the cards have been played, the players separate their decks into the 6 different suits. Only the highest values are counted per suit; meaning, if the player had the values “1”, “3” and “4” for a single suit, the only card value to be scored is the “4”.  If multiple values (for example, two “3” value cards) are available in the same suit, they are added together. The game can then be ended with the player with the highest score as the winner or all the scores can be recorded on a piece of paper and another game round started. The instruction booklet provides three different scenarios for the game to end, but the choice is ultimately left up to the players to decide.

This is a fun, easy to teach, easy to play game. The cards are colorful and the artwork whimsical. The risk/reward element is the most entertaining part of the game. The players must attempt to remember what cards have already been played, how many Bruce cards have been revealed, and try to determine their overall score versus the other players. This requires a surprisingly lot of cognitive skill to play the game competitively, but is by no means necessary to play the game and have fun. 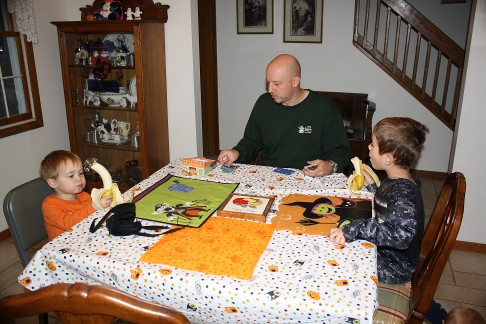 The dice mechanic in the game is not at all necessarily, but does allow the player to “skunk” another player and perhaps even up the score a bit. Because success or failure is randomly determined, rolling the number you want is pretty exciting, especially when you see the look of disgust on your opponent’s face.

From a Geek Skills perspective, this game does a great job reinforcing Counting & Math, Logical & Critical Decision Making, Memorization & Pattern Matching, and Risk vs. Reward. More emphasis if placed on the risk/reward mechanic than anything else, but the logical and critical decision making and the memorization and pattern matching are essential for the player who wants to really compete at winning the game.

In summary, fun stuff. This game provides a great way to start or end an evening at the family gaming table. For even more Geek points, raise your fist skyward, shaking it with mock rage, and yell “BRRRRRRUUUUUUUUUCCCCCE!” when the Bruce card is revealed. My boys loved that.