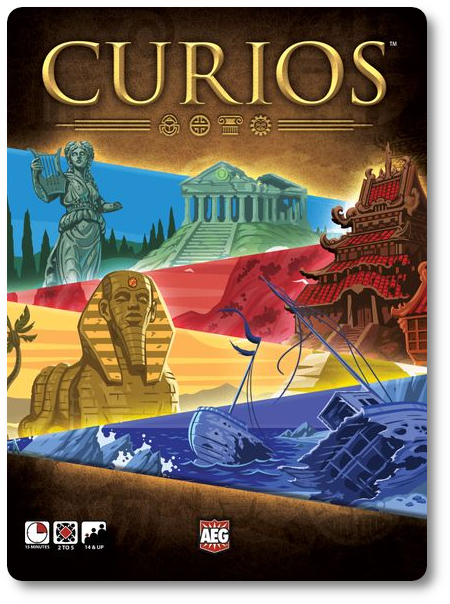 American journalist, author of historical books and political activist, Iris Chang, said: “It is very difficult to hang onto the relics of history.” The past, it seems, is hotly sought after by the present. In this game, you will lead a group of archeologists to dig at historical sites around the world. Others have come to find the relics of the past, as well. Hidden in the sand, earth, and sea are curios of the past waiting to be found, but only by those who dig quickly!

Curios, by Alderac Entertainment Group, is comprised of one First Player token, four Treasure cards, 16 Market cards, 56 Artifact gems (in four different sets, 14 per set), and 35 Archaeologist pawns (in four different sets, seven per set). The cards are as thick and as durable as your standard playing card. The pawns and tokens are made of solid plastic. The First Player token is made of metal. Illustrations by Carl Frank are colorful and help further strengthen the game’s theme and narrative.

Preparing for the Dig

To setup the game, first give each player five Archeoligst pawns of their preferred color. Set any not used off to one side for future use. These set aside pawns are referred to as the “Supply”.

Second, randomly determine who will be the first player and award them the First Player token.

Fifth, take the remaining Market cards and shuffle together into one deck. Deal from this deck a number of cards to each player per the number of players in the game. This is the player’s hand and the owning player may look at them. Place the remaining undealt cards face-down in a draw deck off to one side of the game playing area. This is referred to as the “side deck”.

That’s it for game setup. Begin your quest for fortune and glory!

Curios is played in rounds and phases. A round of gameplay is summarized here.

Phase One: Searching for Treasure

In player turn order sequence, starting with the round’s First Player, each player has the opportunity to place their Archeologist pawns to collect Artifact gems from Treasure Sites. This is done by the player taking one or more Archeologist pawns and placing them to a Treasure Site card to completely fil one of five columns, starting with the least number required to the most required (left to right as you face the Treasure Site card). After filling a column with their pawns, the player collects one gem from that Treasure Site (if any are still available). 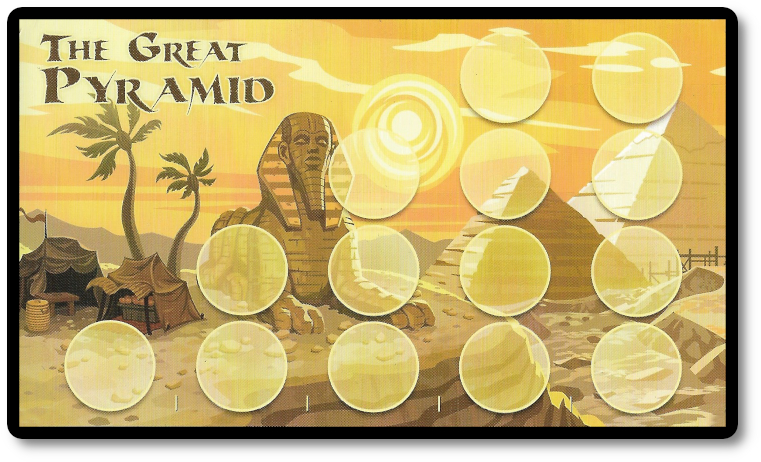 This phase is repeated, one player at a time in turn order sequence, until all players have passed. A player must pass if they do not have enough Archeatoligst pawns left to completely fill a vacant column on a Treasure Site card.

After all players have passed – and before you can continue to the next phase – a bonus artifact can be awarded. The player with the most Archaeologist pawns at each of the Treasure Site cards is awarded one additional Artifact gem from that Treasure Site card (if available). If there is a tie, no bonus gem is awarded.

Now have each player retrieve their Archeoligist pawns from the Treasure Site card, returning them to the front of their owning player.

Starting with the first player, each player now has an opportunity to acquire new Archeologists. This is done by playing one Market card from the player’s hand. The color and number on the card provide the value of one matching colored Artifact gem. After revealing the card, the player takes one Archeologist that matches their color from the Supply, adding it to their ranks. 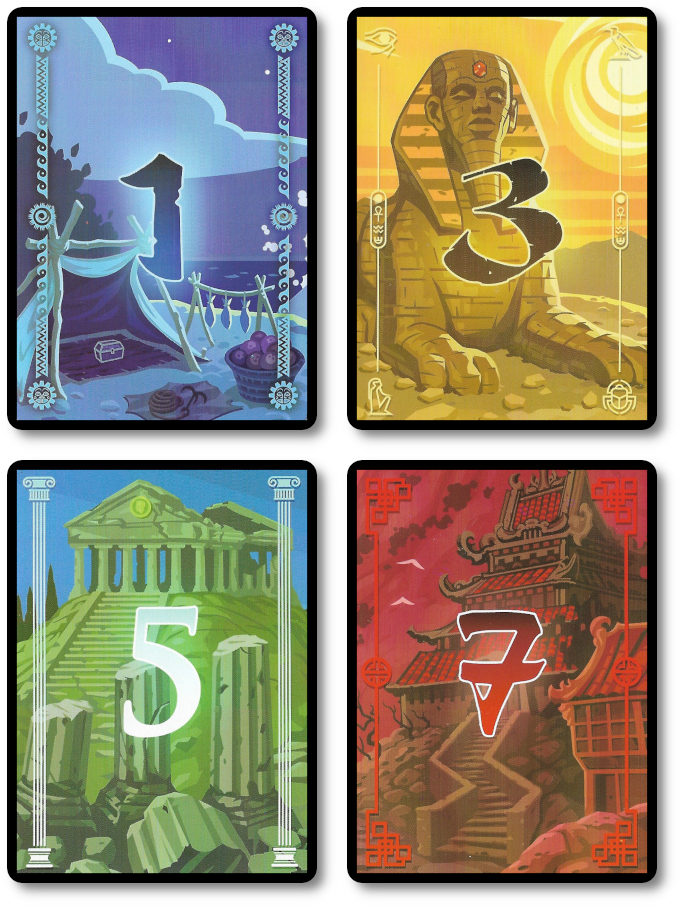 If the player does not want to acquire an additional Archeologist or influence the value of the gems, they can skip their turn during this phase.

This completes the round. The First Player token is now passed to the next player in turn order sequence. The next round now begins with phase one noted above.

The game continues as noted above until two or more Treasure Site cards run out of Artifact gems. The game will end on the same round this condition is met.

The four face-down Market cards are now revealed, showing all the true values of the Artifact gems. That’s right! The Market cards shown during phase two do nothing more than tell the players what the gems are exactly NOT worth!

Every player now counts the number of Artifact gems collected for a specific color and multiplies it by the Market card value revealed. The player adds these values up for each of the four different Treasure Site Artifact gems they have acquired. The player with most points wins the game.

To learn more about Curios, visit the game’s web page.

The Child Geeks were most pleased with the game, finding it to be easy to learn and fun to play. According to one Child Geek, “I like how you have to think about where to send your guys to go dig for gems. If you really want gems, you need to send them out to dig as quickly as you can.” This Child Geek is referring to the limits imposed on the players when they place their Archaeologist pawns to the Treasure cards. The first to the dig site doesn’t have to put much on it to get a gem. But if that dig site is a going concern, it starts to get expensive to find treasure. Another Child Geek said, “I thought the game was easy to learn and I liked how each game felt different.” With the random dealing of potential gem costs and the subtle way the players – as a group – control the gem’s final value – was not lost on the Child Geeks. When the last gem was dug up, the Child Geeks gave Curios their full approval.

The Parent Geeks found the game to be light fun, engaging and had just enough depth to make each round of play an interesting exercise in deduction. According to one Parent Geek, “As the game progresses, you learn more information about the possible cost of gems and how much each player stands to make. I think the real key to winning this game is bulking up on Archaeologists and keeping the market as low as possible to ward off would-be gem poachers.” Another Parent Geek said, “I played the game with friends who know a lot about games and with friends who know next to nothing. Both groups had a lot of fun.” The Parent Geeks put it to a vote and found that Curios was curiously fun, giving it their full approval.

The Gamer Geeks thought the game was well designed, streamlined, and did a good job of keeping the player’s guessing with just enough information to make deductive reasoning an imperfect exercise. According to one Gamer Geek, “A good example of a light game that would be perfect for a filler or when playing with the family. I wish it was just a bit deeper in gameplay, as the process of gathering gems is not altogether interesting.” The Gamer Geeks found the worker placement in Curios to be rudimentary. Well designed, for certain, but exceedingly basic per their own elitist experience.” Another Gamer Geek said, “A good game for families and for those who are just starting to learn and get into the board game hobby. I liked it, but it didn’t win me over.” When the votes were in, the Gamer Geeks gave Curios a mixed review, finding it to be a good game, but just not for them.

I really liked the game. It included several concepts and mechanisms that always interest me. Specifically, hidden information, market manipulation, worker placement, and resource limitations. I find this approach to games intriguing as it makes me stop and think both strategically and tactically at the same time. I also enjoyed how quick this game was. Our longest session was 30 minutes, but that was only because we had to pause for a moment to allow a player to take a phone call from their wife. Otherwise, all our games were over within the 20 to 15-minute timeframe.

I agree with all our groups regarding Curios. They nailed it, as far as I’m concerned. Even though the game did not recieve full endorsement from our elitists, they all agreed the game was solid. This is an important point to make, as I have received feedback from readers that they don’t try the game I review based on specific group responses. Which is fine, but don’t limit yourself. Curios provides the correct depth of play given its time restraints. To put it another way, if you are designing a game meant to be brought to the table quickly, played fast, and then pushed to the side, you have limitations. The game designer for Curios did an excellent job of balancing gameplay with game speed. I never felt rushed or bored. Decisions were light, but not always easy to make. The hidden information that is slowly revealed provides this short game with more than enough meat to keep you engaged.

Do try this little gem of a game. Great for introducing this style of play to new and casual players and an easy win for those who are looking for a quick game filler. Dig into this one and you might just find a rare gem for your gaming table.